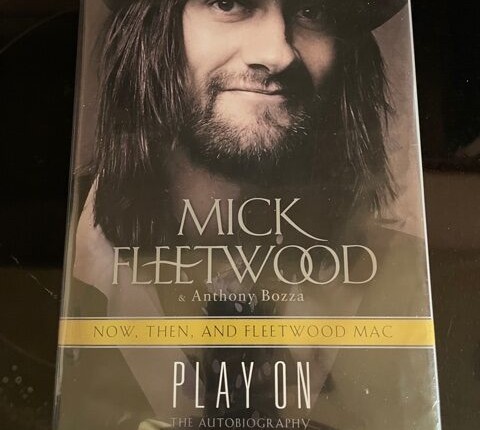 “I see things with wonder each and every day.”
– Mick Fleetwood

. . .
Whoever would have thought that Mick Fleetwood, one of the original creative musicians of the mega group Fleetwood Mac, and I share similar thoughts?

I picked up his autobiography, Play On penned in 2014 with Anthony Bozza, at the Friends of the Largo Library Bookstore for $1. I love Fleetwood Mac, particularly the music written and performed by girl singers Christine McVie and Stevie Nicks. It would be a good book for my brother-in-law Tom who sends us music (CDs) or books about bands. Last time we visited him, we played music together. He on guitar and harmonica, Mike and me on ukulele.

I began to read Mick’s fascinating recollections of his early days in music covering friendships, drugs, sex and rock n’ roll. It is a no-holds-barred look at the life of a man who grew up and unexpectedly became a music icon. He’s gracious and constantly thanks those who supported and inspired him.

One page 6, he writes, “I see things with wonder each and every day. Sometimes I wonder how the hell I got here. I love drumming and I know I’ve never been suited to do much else, but truth be told, I regard myself as a guy who happens to drum, not as a guy who is a drummer. It’s a strange and subtle contradiction.”
. . .

That paragraph struck a chord within me. I vaguely remembered an artist statement that I wrote four years ago for Florida CraftArt – “I am an evolving and ‘restless’ basket weaver who finds new inspiration every day. . . A vine’s flowing arch, the shades of color on reed, the texture of sparkling beads, the mix of shredded postcards. . . I weave, I sense a graceful rhythm. All is well.”

So similar! I’m enjoying this book and while reading, revisit my thoughts over my artistic journey just as Mick did.

I am thankful for this journey and adventure.

. . .
I’m in constant contact with those marvelous, encouraging folks at the National Basketry Organization. A member for years (since its inception in 1999), I had dropped it for several years. Rejoining this group as been instrumental in my continuing growth as a maker. An NBO scholarship awarded to me in 2019 caused me to seriously consider installation-themed work as a focus.

So, when I was awarded the Creative Pinellas Emerging Artist grant, I emailed NBO Executive Director Pam Morton and Administrative Manager Joan Ciolino the good news and promptly forgot about it. Someone at yesterday’s TBBG (Tampa Bay Basketmakers Guild) meeting said she was reading something on her computer when up popped an article about me and the grant.
. . . 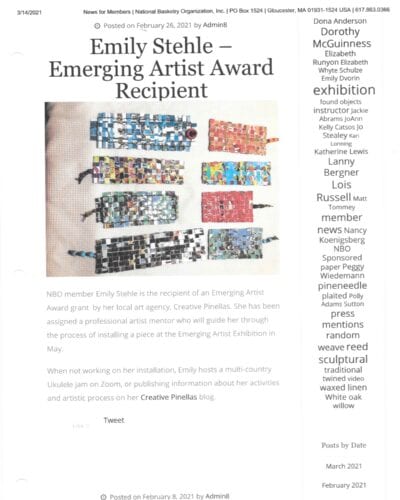 . . .
. . .
Have to admit, as a former journalist and public relations person, seeing something in writing (that you didn’t write yourself), what we call “third party endorsement,” is thrilling and humbling. I am very grateful.
. . .

You can explore Emily Stehle’s work via