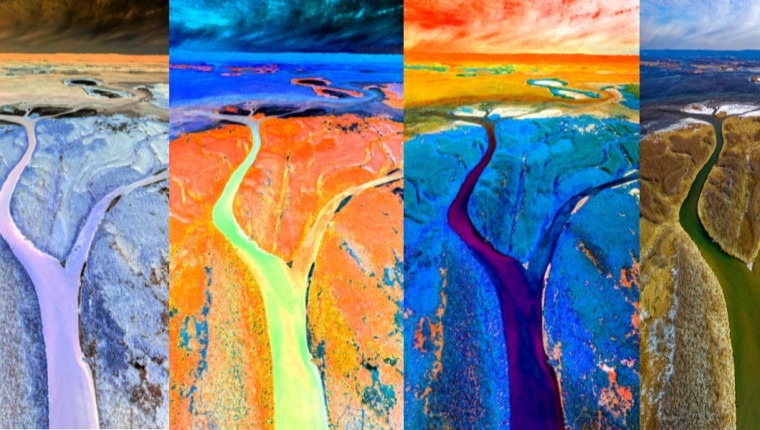 Started out with a theme and a play that sort of went along with that. Decided I wanted music. But then started really fleshing out the play, and wondered, “Is this actually a novel kind of thing? A lot of rivers here.”

Rivers, in this context, means the many streams of conscious(ness)/stories I can overpopulate a landscape with. I have often just been guilty of ‘doing too much.’ But I can’t help it. My mind flows outward from a first impulse. We’re all like that, actually. Sometimes we’re just guilty of what Buddhism calls the monkey mind. But sometimes, it’s the only way to really create, or view, the WHOLE. Through the many streams and rivers that are birthed from the first impulse…hopefully in the end, channeling back into something that really is WHOLE. The tributary, I guess in the natural world…

Rivers as a natural phenomenon are of course, magical and symbolic. I grew up on Riverside Drive. I named my first son River. Rivers, for me, are powerful. Rivers are incredible meaningful in most cultures, and without them, there would be, of course, no cultures.

All hail all the rivers…

But… how many rivers does a story actually need?

And, a novel? Huh. I’ve tried that before. I wrote about 500 pages of something, decades ago, which another writer friend told me “If you didn’t have chops, I would have stopped reading a lot earlier…” Which was her nasty-nice way of saying although I could string words together well, she was having a hard time figuring out where they were going.

Fair; it was set in two time frames, the future and the present. Later I read Octavia Butler’s Parable of the Sower, which was written a few years earlier than my attempt, and I realized, Oh. That was a real novel with a clean plot and no distracting devices – also, like my attempt, about a horrifying future. Butler actually prophesied the 45 administration and the beginning of the end of our ‘united’ states… taking it even further, with her brilliance and breadth of vision, than I could muster. After falling in love with her writing and the book, I didn’t feel so bad about failing. Oh well. She did it a hell of a lot better; and now she’s in the cannon. Amen. That was truly a humbling experience all the way around, though. I tossed the 500 pages into my computer’s trashcan,  figuring eventually some other kind of fictional novel-like thing would come up. And in fact, a few years ago, I wrote a short story, or what I thought was a short story. It was also set in the future, and it was going to be very complicated, and to my mind, great…

But the short story was rejected, and I was upset… till a friend said, “Well that’s because it’s clearly NOT a short story, it’s a first chapter. Write the whole book.”

I didn’t (yet). And that idea is not that one (although they both center around melanin research).

This is all to say… figuring out which and how many rivers/stories a written work can successfully pull off has always been, shall I say, an exhilarating challenge for me.

This is why journalism has probably helped me become a much better writer. Much cleaner, more direct. I’m a harsh self-editor, really always have been. I think writing plays helped me with that. Paula Vogel, my teacher at Brown, would say, “if it’s not on the page, it’s not on the stage.” Meaning, if you want it there, put it down in writing – because plays get given to directors, and the writer’s intention may or may not be added in the mix; putting what you wanted and meant in the text helps address that somewhat.

Learning to edit plays was extremely helpful in learning to give up words when I became a newspaper writer and journalist because I never held onto language when I was told there wasn’t enough space for this or that — because the article is focused on this (river), not that (river). And there’s a publisher with a deadline, and I have a week. In other words — not a lot of time to mess around.

I did still present Sometimes Farmgirls in a much less linear and more time-bouncing form than it finally got published in, by the way. Publisher’s recommendation, not my own. Sometimes you give in, just to get it done. And I thought, hmmm, he is reading and recommending as a reader. Maybe I need to listen to a reader. In the end, I agreed, since there were so many layers to the book already, between the subject’s writing, the FBI file, the letters, the photos, and the interviewees’ testimonies…

Maybe this play with music actually needs to start out as a novel — connected by four stories. Plus graphic art.

Geeeeezzzzz… there you go again…

See how easily that happens?