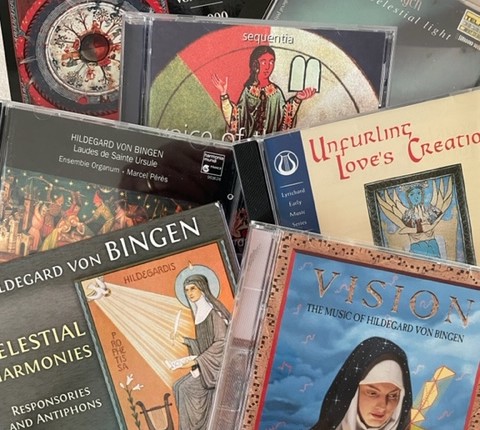 . . .
It’s not often we hear music from a composer who lived more than 900 years ago, about the time of the Second Crusade and building the Cathedral of Notre Dame.

But the poems and sounds of Hildegard von Bingen still linger after all this time – a German nun whose music, writing, scientific musings and mysticism shaped ideas in a world dominated by male thought and action.

She won celebrity as a polymath and for her creative vision and defiance of religious doctrine – she wrote for women’s voices at a time it was forbidden – and both Pope Eugenius III and Emperor Frederick Barbarossa sought her advice and embraced her writings.
. . .

. . .
This weekend, The Florida Orchestra and Master Chorale of Tampa Bay offer a short piece by Hildegard to kick off a serene night of music that ends with Mozart’s Requiem.

Lasting just two minutes and sung a cappella, O virtus sapientiae (O Strength of Wisdom), is part of Lux Lucis, a collection of three motets that refer to light, radiance and hope. The music resembles Medieval plainchant but with a more sensual flow, and the singers embellish on the written notes.

“As ancient as it is, it’s really modern in sound,” says Amy Bullard, a soprano with the chorus. “It’s very humanist, and hugely challenging, being straightforward on the page but not simple at all to sing as a group.”
. . .

. . .
The singers’ goal is to present the text in as natural a way as possible – ad libitum – while staying cohesive as a group. The planning for such a brief piece, Bullard adds, underscores the difficulty.

“Much like the works of Mozart, this piece is so pure and simple sounding, yet requires incredible skill and control,” she says. “Many hours have gone into perfecting our technique so that listeners can be transported to another time.

“Breath control, diction, tone quality, intonation and more are under the microscope with Hildegard. That’s the technical challenge and the foundation for communicating the mystical, the sacred, the Divine Wisdom.”
. . .

. . .
Like so much of Hildegard’s music, this piece possesses a liquid freedom full of expressive touches not found in the chants of her time. Her style is full of visions of luminous objects, scholars believe, that may have been hallucinations caused by migraines or even epilepsy.

In 1141, she described a light of tremendous brightness coming from heaven, “Like a flame that does not burn but enkindles, it enflamed my entire heart and breast.” She composed through what she called “divine inspiration” as if “pierced by the light of God.”

In 1998 – the 900th anniversary of Hildegard’s birth – performers and record companies celebrated her Benedictine hymns, sequences and allegories with an almost pop sensibility, some backing her monophonic plainchant with rhythm tracks and other highly stylized colorings. Today, she enjoys a flood of scholarly interest, and Internet sites and new recordings consecrate her as a saint in her own right.
. . . 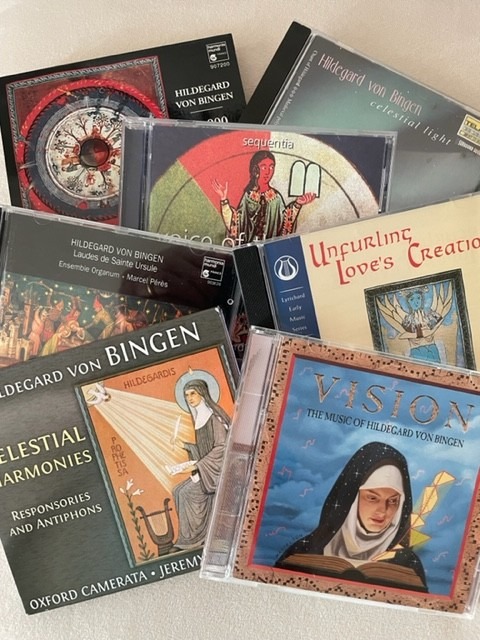 . . .
Hildegard was born near Mainz, Germany, the 10th child of a noble family. Because of her poor health (although she lived into her 80s), her parents sent her to the church, and at age eight she began her formal education with a Benedictine nun. She later joined the order and at 38 became head of her convent. The name Bingen comes from the town where she died, Bingen am Rhein.

Hildegard called music the highest form of human activity, and she blended mysticism with religious devotion. Her lucid imagery forms the cornerstone of her Play of Virtues, and her viewpoint is distinctively female. Many of her 77 existing chants pay homage to women – the Virgin Mary, female saints and their followers.

“She inspired women to become aware of their power in the material world, and to exercise that power,” writes J. Michele Edwards in her book Women and Music.

“It’s amazing this music is so old,’’ Bullard says of the opening work. “But if something is unique or good in its day, it stands the test of time.’’
. . .