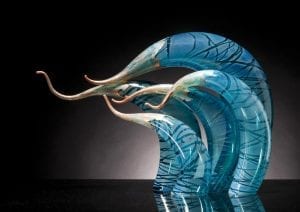 An Artist’s Guide to a Career in Glass Art 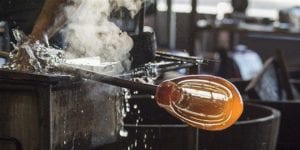 Gialanella in the Gardens 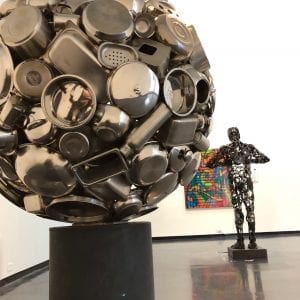 Three of his steel assemblage pieces will be on display creating a stark contrast against the natural surroundings of the Botanical Gardens.

A Conversation on Art Glass Collecting with Susan Benjamin 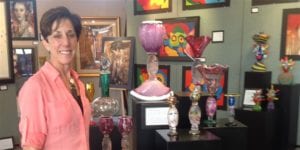 Artist and gallery owner Duncan McClellan, along with a group of cohorts, aims to make Pinellas the glass art mecca of the Southeast

Hi there — welcome to the Glass Coast!

Didn’t know you were here already?

Duncan McClellan — St. Pete glass artist, owner of the Duncan McClellan Gallery and glass art evangelist — is spearheading an initiative to let the outside world know that Pinellas County is a hotbed of glass art, and is going to be more of one in coming years.

“Seattle is the mecca for glass [art],” he said in a recent interview, noting that’s where Dale Chihuly is based. “I want to make this area one too, so that there’s another center for glass art on the opposite end of the country.”

As part of the push, McClellan purchased the domain name glasscoast.com — which was coined by his gallery’s art director, Mary Childs — in late 2018 and had a website up and running by early ’19. It dispenses information on museums, galleries, studios, classes and demonstrations related to the medium.

Along with a group of cohorts, he’s leading a sustained, strategic effort to get the Glass Coast brand and Pinellas County’s sterling reputation for glass art, out there.

“I put Mary Childs on a new task late last year — to get more outreach,” McClellan, 64, explains. “To that end, we’re trying to get our artists seen in other venues and other communities. We just had a showing in Stuart, Florida for about six weeks.”

McClellan insists on spreading the credit around, but when asked if he considers himself the primary catalyst, his response is emphatic: “Hell, yeah,” he says with a chuckle.

After all, he’s the one who trekked on his own dime to Phoenix and Santa Fe and set up three tour groups of 40 to 50 glass art enthusiasts to visit St. Petersburg for a three-day tour.

“I’ll have reached one of our goals when we put together tour itineraries on the website and we see groups from around the country downloading information and planning trips to come to St. Pete for glass art tours,” McClellan adds.

Another key prong in making Pinellas County a glass art mecca is developing the artist community. To that end, the gallery’s DMG School Project (‘demonstrate, mentor, grow’) offers six-week emerging artist residencies that include instruction, virtually unlimited use of the gallery’s hot shop — “they’re usually here 18 hours a day,” McClellan says — Airbnb accommodations, and access to other glass artists who can help them realize their creations.

“Glass art is a very expensive medium,” he says. “To put together a body of work can cost 20 to 30 thousand dollars. Most emerging artists don’t have the money. We’re able to get them started, get pieces made and start a track record.”

McClellan says that one of his residency graduates, Jack Gramann, sold a sculpture to a museum in Newark, New Jersey. Another, Dan Alexander, stayed on in St. Pete and took a job at the DMG School Project.

The DMG School Project also works in partnership with schools and with organizations serving youth facing socioeconomic challenges. This traveling program has inspired over 102,000 children since 2013.

The rise of St. Petersburg as an arts community is no secret, but its reputation for glass art is less well known. But it’s fair to say that the glass medium has gained the most renown nationally.

McClellan has been the principal driving force. Raised in Orlando the son of an advertising executive, he did not take up glass art until age 30. “At the time, it was hard to find places to blow glass in the area — there were a couple of little furnaces,” he says, citing Dean James Studio in Ybor City and Susan Gott’s Phoenix Glass Studio in Tampa. “I would go to New York to study — work three jobs so I could blow glass every three months for three days.”

He found a home at Chuck Boux’s Sigma Studios in St. Pete, where McClellan made his art for some 20 years, and did quite well showing and selling in outdoor festivals.

When McClellan decided it was time to open a glass art gallery, he first looked at Ybor City. After encountering roadblocks there, he turned his attention to St. Pete at about the same time the idea of the Warehouse Arts District was bubbling up. The city administration and power brokers were far more hospitable on this side of the Bay.

McClellan found the ideal property, a former tomato packing plant near 5th Avenue and 24th Street South. “It wasn’t on the market,” he says. “It took me awhile to convince the owner to sell it.” He purchased the property in 2009 and opened the gallery in 2010, predating the formation of the Warehouse Arts District by a year.

Shortly after, he acquired an adjoining property and opened the St. Petersburg Hot Glass Workshop. The complex now features 3,000 square feet of indoor gallery space and 5,500 square feet of outdoor courtyards, as well as the hot shop.

While Duncan McClellan Gallery is the nexus, the community’s glass art scene has spread within the last decade or so. Hot shops include Zen Glass Studio, Morean Glass Studio, Pacini Glass and Sigma Studio. Two others, McClellan says, are in the development stages.

Commitments to glass art by the Imagine Museum, the Morean Arts Center, Syd Entel Galleries (which houses Susan Benjamin Glass), Craftsman House Gallery, Florida CraftArt, Fourward Glass Gallery and other showcases have advanced the cause. And, of course, the Chihuly Collection on Central Avenue is a major selling point.

McClellan is pleased with his Glass Coast coalition’s progress thus far. He proudly notes, “We are up to six couples who have purchased houses in St. Pete after coming to see us during a Second Saturday ArtWalk. They loved the scene, and they loved St. Pete.”

The initiative remains very much a Pinellas (and particularly St. Pete) thing — and a glass thing. “I used to work in clothing retail and my mentor said to find a niche and own it,” McClellan says. “If the opportunity arises, you can add other lines as well.

“Our focus is not to the exclusion of any other art group, but this is what we do, this is what we know. We’re hoping glass art helps to raise all boats. And if the scene expands regionally, that’s terrific, but Pinellas is our focus now.”