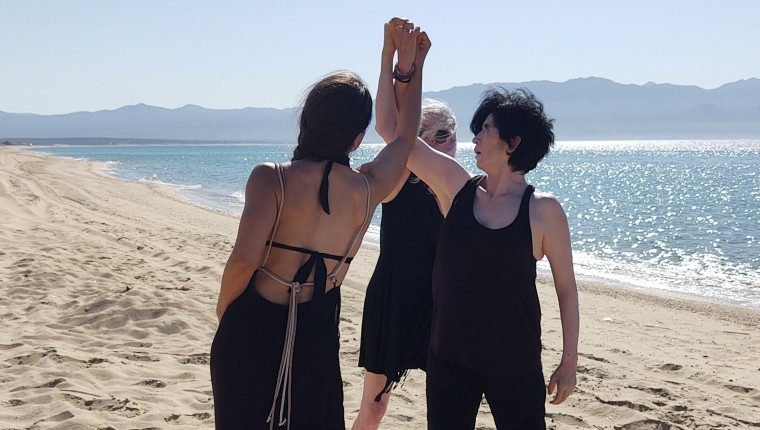 Words and Photos by Andrea Assaf
. . .

. . .
While the artists are rehearsing and the musicians are composing, all preparing for the premiere of the new performance work titled At Water’s Edge / Al filo del agua, I steal a few moments away from programs and production to share with you a brief history of how this project came to be. Here you will find images of work-in-progress, and quotes from the co-creators, directors/choreographers Dora Arreola and Celeste Miller.

This project began as a cross-border collaboration that Art2Action co-commissioned in partnership with Grinnell College and the National Performance Network (NPN) back in 2017. Of course, the pandemic delayed its premiere, but the added development time allowed ideas to gestate, ferment, root and grow.

In the early part of the process, choreographer Celeste Miller wrote – “We come together to compost from the HERE NOW. To compost conjures: death and dying, decay, collapse, rot, blend, merge, foster, nourish, nurture, transformation. In our work as a creative (composting) team to build this full-length work, we will develop/design improvisation structures to provide a forum for others to come together and explore the ideas through the embodied practices we develop.”

. . .
. . .
During the multi-year creative process, the collaborators hosted development residencies in three very different locations that they call home – at the U.S.-Mexico Border in Playas de Tijuana, in Tampa, Florida and in Grinnell, Iowa. In the initial residencies, 2017-19, the specter of the border figured prominently in the development process.

CELESTE: I had this image in my head of “At Water’s Edge.” So I came down to Tampa, and we sat in the garden at the Dalí Museum, and we spent about an hour trying to define “edge” between English and Spanish.

DORA: The next step was writing about edges, and what does that mean metaphorically, symbolically, realistically? Politically, and bio-politically?. . . We researched also. The next step was to grab what resonated most with us, what was more truthful in our work, in interest and themes that we would like to explore.

The Border came out in that conversation, so we went to Mexico. We went to the border, and we collaborated with artists there to continue exploring – what is the edge? What are the edges that you are crossing, or that are stopping you from moving forward? *
. . . 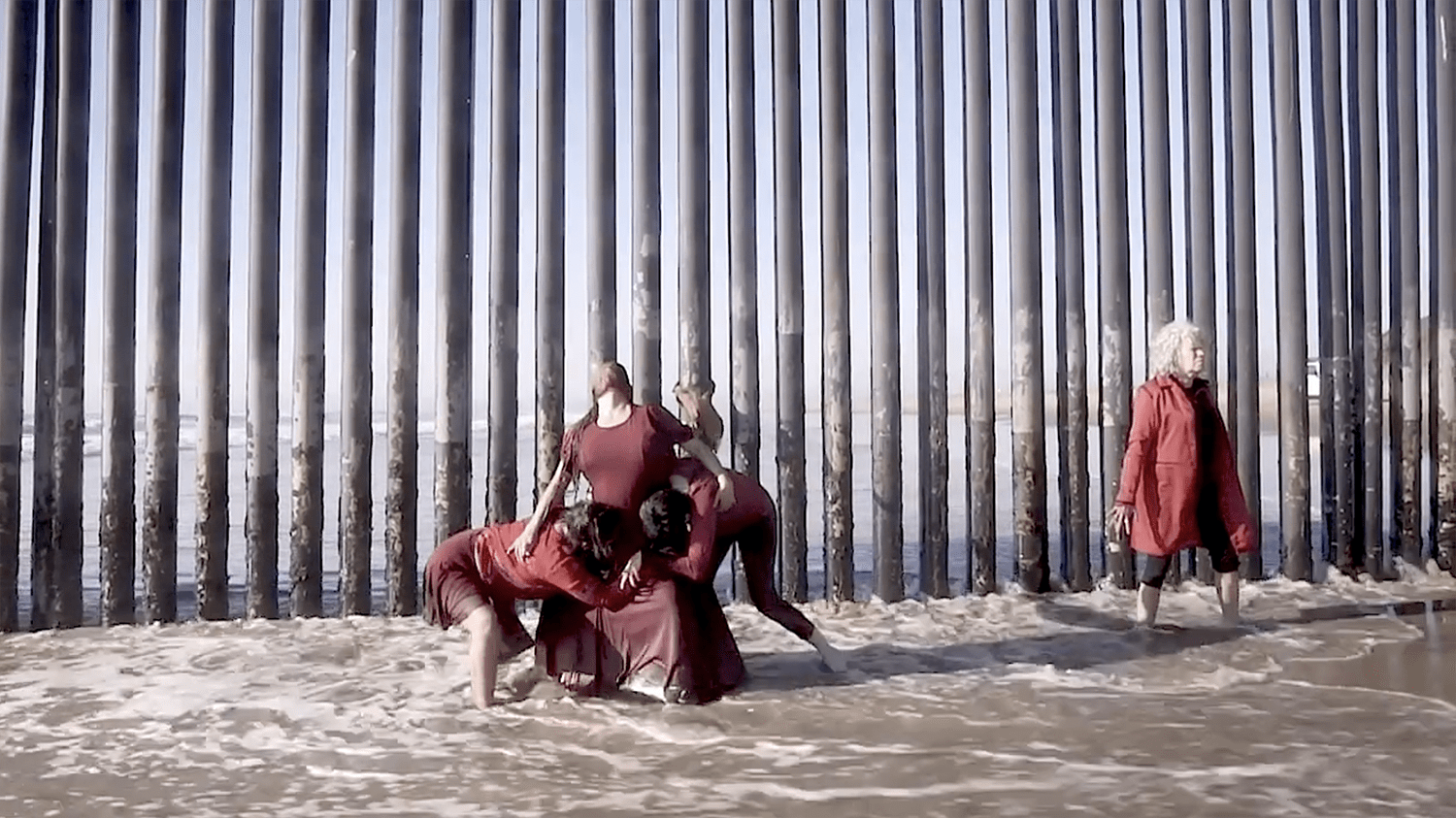 . . .
An early description of the project stated – “Water’s Edge examines the shifting of borders/boundaries/edges/filos—natural forces that change the boundaries, as well as how political forces change borders, or delineate them. Women in this location are women who refuse to follow the rules of patriarchy and its destructive patterns.” Women who resist.

Then, writes Celeste, “In the midst of the pandemic, when so many things were re-considered, our research took us to Gloria Alzaldúa’s manifesto, which seemed to frame the heart of our work.”
. . .

Throughout millennia, those seeking alternative forms of knowledge have been demonized. In the pursuit of knowledge, including carnal knowledge (symbolized by the serpent), some female origin figures “disobeyed.” Casting aside the status quo of Edenic conditions and unconscious “being,” they took a bite of awareness – the first human to take agency.

Xochiquetzal, a Mexican indigenous deity, ascends to the upper world to seek knowledge from “El Arbol Sagrado,” the tree of life, que florecía en Tamoanchan. In another garden of eden, Eve snatches the fruit (the treasure of forbidden knowledge) from the serpent’s mouth and “invents” consciousness – the sense of self in the act of knowing. Serpent Woman, known as Cihuacoatl, the goddess of origins, whom you think of as La Llorona and sketch as a half-coiled snake with the head of a woman, represents not the root of all evil but instinctual knowledge and other alternative ways of knowing that fuel transformation.

These females are expelled from “paradise” for eating the fruit from the tree of knowledge of good and evil and for taking individual agency. Their “original sin” precipitates the myth of the fall of humankind, for which women have been blamed and punished. The passion to know, to deepen awareness, to perceive reality in a different way, to see and experience more of life — in short, the desire to expand consciousness — and the freedom to choose, drove Xochiquetzal, Eve [Lillith], and Cihuacoatl to deepen awareness.

You, too, are driven by the desire to understand, know, y saber how human and other beings know. Beneath your desire for knowledge writhes the hunger to understand and love yourself. – Gloria Anzaldúa

“We began to research the deities she mentioned,” Celeste writes, “and got in touch with them, and others in the pantheon of story, and our own legends — women who move at the edge of comfort and discomfort, who were punished when they chose to stand up or speak out, who were cast out and demonized in the re-telling.

“These stories, in the way they are told through history, set the foundations of our legal and political systems. These stories, when preserved and perpetuated, maintain the hierarchical structures of colonialism, patriarchy and racism. It’s way past time to pause to ask – What might have been left out of the story? Which parts were suppressed to make the oppressor the hero, to justify oppressions? What story lies under that story? Which version might offer up a different model, or point the way to new possibilities? As we shared stories with one another, mixing myth and legend with our own stories, we worked to discover the braids that we now weave together.”
. . .

. . .
Celeste called upon Lilith, sometimes known as Adam’s first wife, who stormed out of Paradise to a desolate wasteland rather than accept Adam’s demands for power over her. She was subsequently turned into a demon in the endless lore of maligned women. But Celeste prefers to explore her, rather than the more docile Eve.

Dora looks for Cihuacoatl, a venerated, amphibious deity of the Mesoamerican or Aztec pantheon. This respected goddess was changed into “La Llorona” during the Spanish colonial period of Mexico. In spite of being taught to fear her, she teaches us about liberation, healing and resistance.

By knowing Xochiquetzal and Coatlicue — goddesses of creation in the Aztec culture who were later translated as sinners, rebels, abominable beings — collaborating co-creator/performer Miroslava Wilson discovers the great powers beneath myth: integration of mind-body-spirit, abundant creativity, care, forgiveness and agency.
. . . 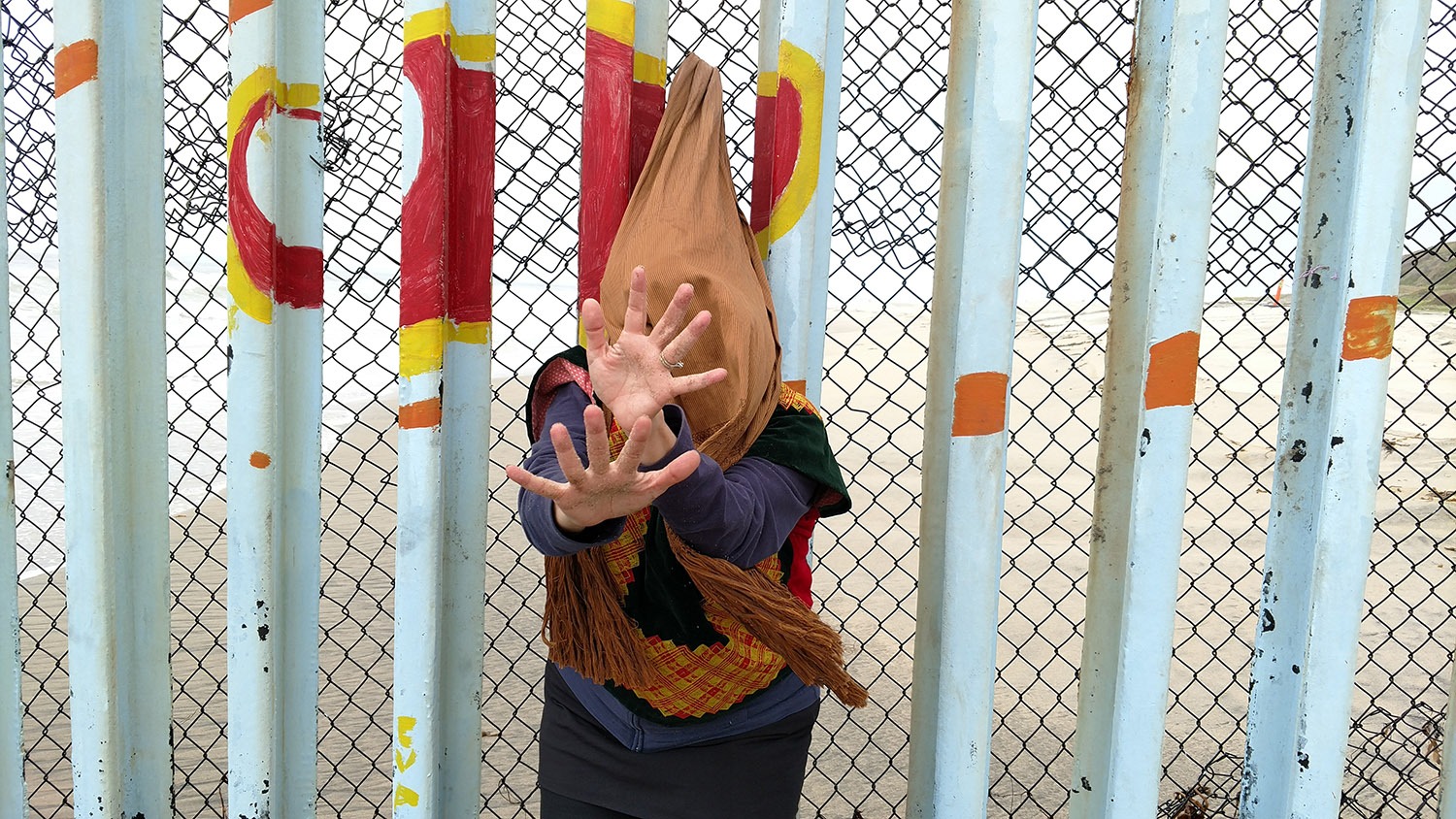 . . .
At Water’s Edge / Al filo del agua is a bilingual, interactive, theatre and dance performance, with storytelling and live music, created by three women from different generations and different geographic locations—one in the United States, the other in Mexico, and the third at the edge of the two. Stories, legends and acts of resistance intertwine as their lives intersect.

“As a young dance student in the early ‘70s, as much joy as I found in dance, I was torn between whether I should be in the studio or on the streets protesting. I sought, and continue to seek, spaces where these intersect,” writes Celeste. “It is our hope that the performance work that arises, will serve as a site for audiences to consider ‘Staying in the Trouble’ (Donna Harraway) in troubling times, cultivating our potential to be response-able, as we are required in times of ease as well as in times of turmoil.”

In the most recent development residency, earlier in June 2022, in La Paz, Mexico – we filmed the three co-creators at water’s edge, exploring choreography, gestures, images. . .  If you come to the performances on June 23 and 26, you’ll see some of these images of Baja California, filming at the edge of the sea. All of these sites inform the performance, live in the embodied memory of the artists, and in the visual world that audiences will encounter.
. . . 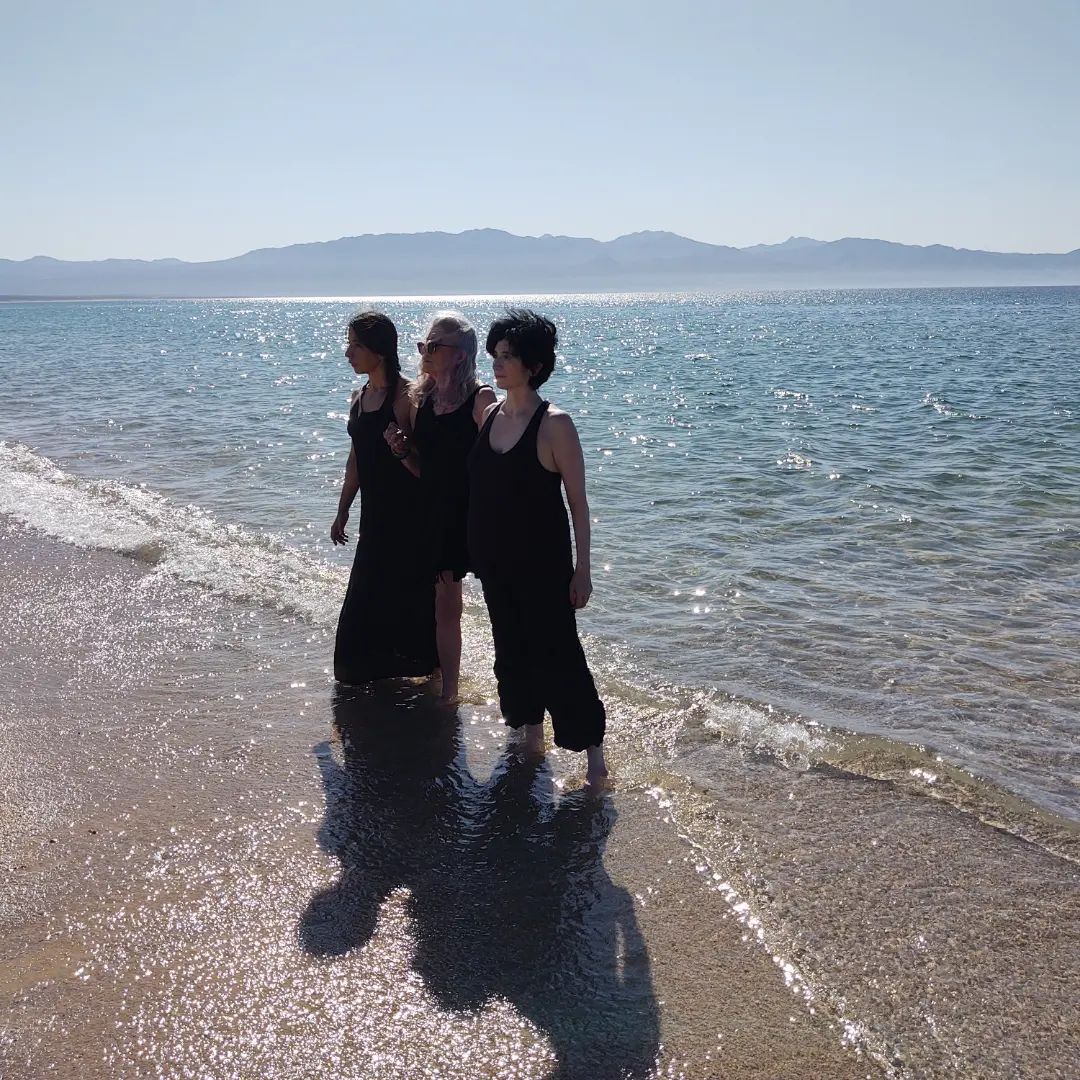 . . .
DORA: I am looking at, what are the rituals for this work? That aspect we call “ritual” – to find the structure of a movement’s relationship to space and time. There are personal rituals, of course, and more than personal. What is beyond my private ritual, and why? *

In reflecting on the creative process for the Network of Ensemble Theaters, Celeste writes, “Dora and I have a long history, but this was only my first project collaborating with her, and her company Mujeres en Ritual — an ensemble, a process, a community that can’t be known in a short time span. Their history is deep and complicated. The members of Mujeres are all well-respected international artists as stage and film actors, singers, dancers, educators – Mujeres is just one part of the fabric of who they are.

“During my first creative residency with Mujeres, in 2018, I finally began to understand Dora’s en ritual approach to theatre-making. Whereas my cultural artistic/rehearsal practice is to create and then rehearse the material through a process of repetition/revising, Mujeres create – and then rather than repeat/rehearse, each time they revisit/rework material, they enter it as a ritual practice.

“From the outside, this result may seem the same, but the relationship to the work enters the bones differently. This has profoundly shifted my practice.”
. . .

. . .
We are all very excited about presenting this performance at the Museum of Fine Arts, St. Petersburg (MFA) Sculpture Garden. After exploring many spaces around the Tampa Bay area, we found the ideal location and partnership at the MFA St. Pete. The performances coincide with the exhibit Women’s Work: A Survey of Female Photographers.

There is a fountain, and a gate through which we can see the water, and a sense of timelessness and enchantment (in a COVID-safe, yet contained, outdoor environment).
. . . 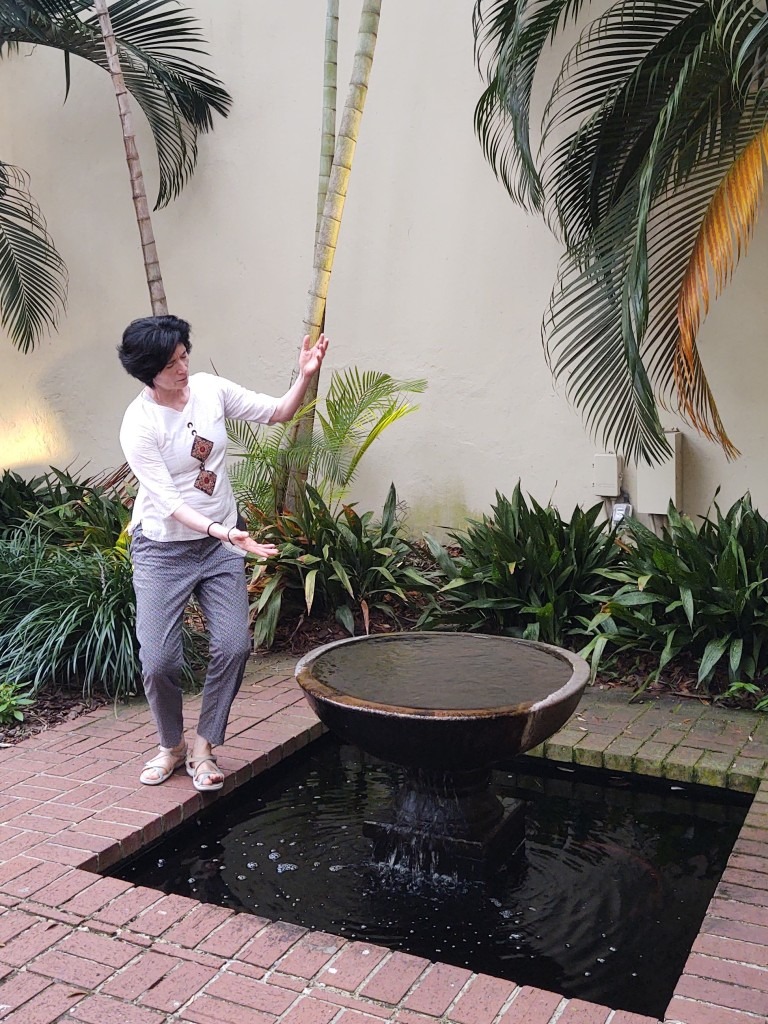 . . .
DORA: We want to [transform] it, magically and theatrically. The potential of doing that with voice, with movement, with music — to change the nature of the garden, to bring some kind of magic. . .  *

The performances will also include original music compositions by vocalist Siki Carpio, a member of the Mujeres en Ritual company who traveled from Mexico the week of the performances, and Atlanta-based violinist Chip Epsten. The co-creators consider live music and embodiment part of the composting, healing, transforming process.

DORA: We can’t deny the aspect of healing in this work. Talking about these places that are so contested in this moment, the people around these [contested spaces] that we wish could have a place. . .

These areas can be healed. The waters can be cleaned. Justice for women, for everybody — that aspect, through our movement, our rituals, that’s what we want to explore. . . with intentions to bring the message of hope. . . *
. . . 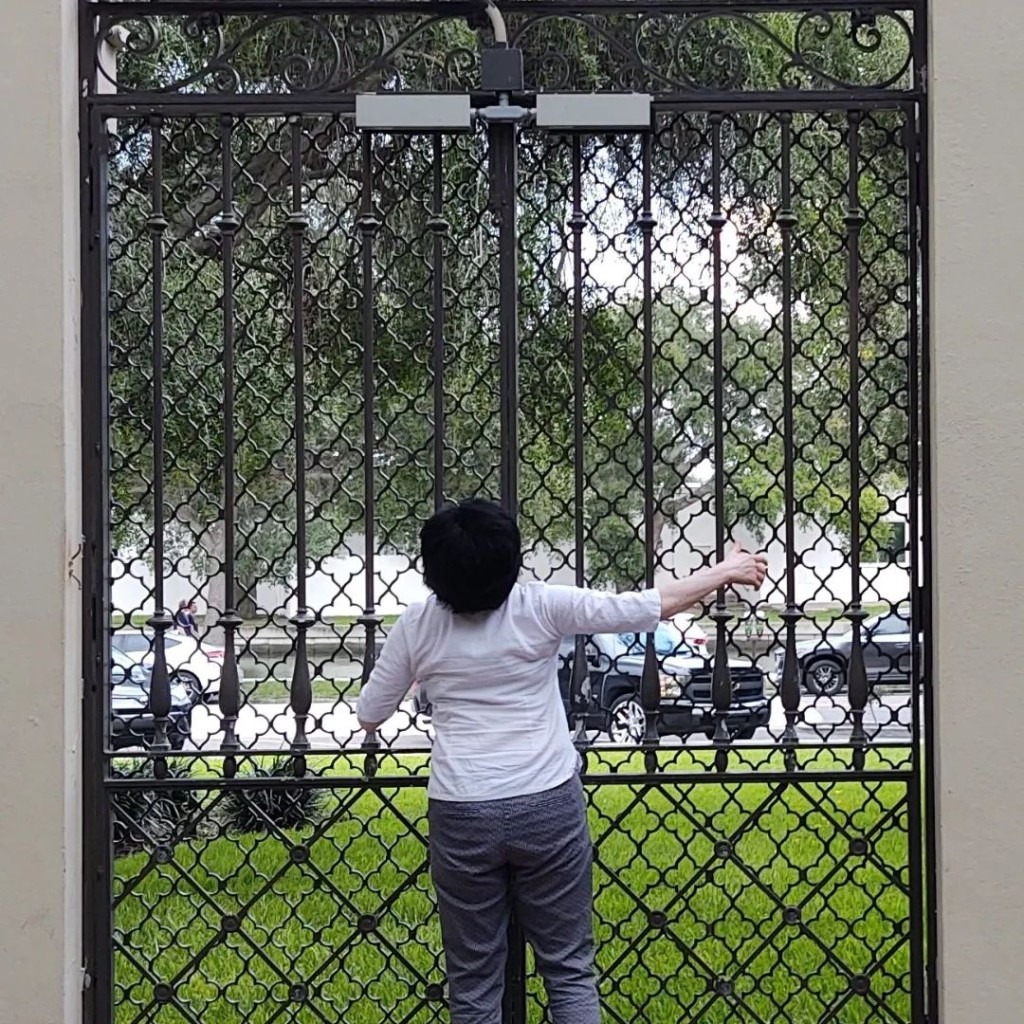 Andrea Assaf is a writer, director, performer and cultural organizer. She is the founding Artistic Director of Art2Action Inc., and Co-Director of the National Institute for Directing & Ensemble Creation. Her original work, Eleven Reflections on September, has been featured at OSF as part of CAATA’s National Asian American Theatre Festival, La MaMa, The Apollo, The Kennedy Center, The Carver Center, and internationally. Awards include: 2021 Silk Road Film Awards Cannes (Director, Best Experimental Feature), 2019 NEFA National Theatre Project & 2019 NPN Creation Fund Commission for DRONE, 2017 Finalist for the Freedom Plow Award for Poetry & Activism, 2010 Princess Grace Award, and more. Andrea has a master’s degree in Performance Studies and a BFA in Acting, both from NYU. She serves on the Board of the Consortium of Asian American Theatres & Artists (CAATA), Alternate ROOTS, and is a founding Steering Committee member of the MENA Theatre-Makers Alliance (MENATMA).

. . .
AT WATER’S EDGE / AL FILO DEL AGUA is a National Performance Network (NPN) Creation & Development Fund Project co-commissioned by Art2Action, in partnership with Grinnell College and NPN. The Creation & Development Fund is supported by the Doris Duke Charitable Foundation, the Andrew W. Mellon Foundation, and the National Endowment for the Arts (a federal agency). Additional support comes from the NPN Artist Engagement Fund and the Ford Foundation.