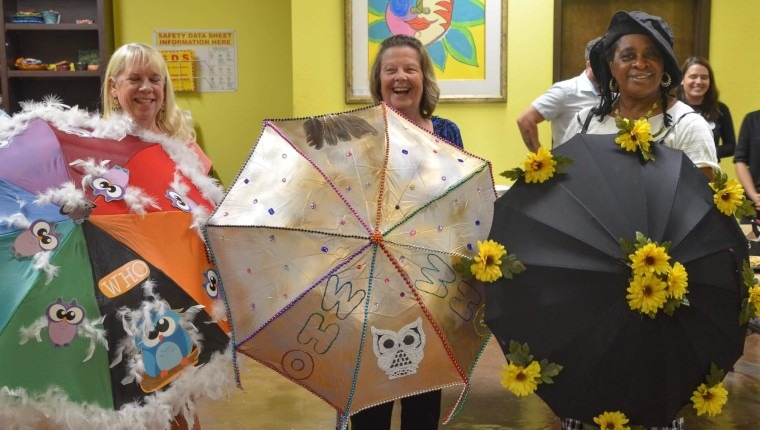 Healing Our Collective Heart
Through the Arts

. . .
Karen Errico sits on her back patio facing Safety Harbor’s Alligator Lake. It’s a typical early fall Florida afternoon – sunshine glistens across the surface of her pool, palm trees sway just a little, and a glass of honey ginger iced tea sweats on a small table beside her. She is appreciative of the view, the weather – and especially of her health.

Karen spends time here every day and over the past year, has depended on her love of a small instrument she holds across her ribs, against her heart.  “I don’t think I would have made it through Covid had it not been for the ukulele,” she says. “That, and prayer.”
. . .

. . .
Errico has been a force for good in Safety Harbor. She started Women Helping Others (WHO), to raise funds for local nonprofits. Prior to the pandemic, it was a Friday night out for women, whose only requirement to join was to bring a dish to share or a bottle of wine, and a $20 donation for that night’s designated charity.

WHO provided much needed funding for organizations such as The Mattie Williams Neighborhood Family Center, the Safety Harbor Art and Music Center, Whispering Souls African American Cemetery, the Harbor Dish who work against hunger and food waste – and many, many more. She is passionate about the work and the women who show up to support each nonprofit.
. . .

. . .
Three years ago, Errico had an abnormal lung X-ray that was followed by a CAT scan. She learned her lungs were fine but she had an aortic aneurism. “It measured 4.7 centimeters,” she says, “and Medicare won’t cover the cost of surgery unless it’s a 5.0.” Her doctor told her they would check it again in six months.

Through all of this, Errico’s passion for the ukulele grew stronger. Her interest in the instrument had started about a year before, when she had spoken to a fellow Ruth Eckerd Hall volunteer who told her about the Tampa Bay Ukulele Society.  “It’s free to join and they have ukuleles in all of the libraries in the county,” Errico explains. “You get it for a month – that and a bag, a tuner, a video . . .  music. I checked one out here in Safety Harbor for a month and then I checked one out of the Dunedin Library. After two months, I bought one.”

She enjoys being social and has discovered opportunities to teach, learn and perform her music. “I went on a ukulele trip to Tuscany. I had a roommate from England. She has since been here to visit. We played — took lessons every morning after breakfast. We had a cooking class. We went to a spa. We had wonderful organized dinners. Then we’d play music at night.

“The next year I took one of my granddaughters to a ukulele festival in Vincenza. I was having so much fun—traveling and doing jams, and then everything got locked down.”
. . .

. . .
Errico plays with Dunedin Ukes. “It’s an older group,” she says. “Our leader went on Facebook Live every Monday. You couldn’t hear anyone else but you were playing and you weren’t alone.”

The pandemic has altered so many aspects of life for everyone. Stress levels have increased and medical professionals have had to give so much more than they were already giving. That and the fear of catching the virus has left many feeling isolated and sometimes, hopeless.

For some, hope has come in the form of mindfulness and for others, such as Karen Errico, coping has come through the arts and connecting with people who share the same interests. Online resources have increased, some yoga instructors have established classes outdoors and there are places that have served as artful centers, such as St. Pete’s Morean Arts Center who recently held an “Art as Therapy” workshop for teens. The Dunedin Fine Art Center is offering an art and wellness workshop later this month for adults. The Museum of Fine Arts offers Mood Tours, times to pet Therapy Dogs and free admission for those with a doctor’s prescription for art.
. . .

. . .
The You Good? Campaign through the Pinellas Wellness Foundation has taken a step toward sustaining a “seamless integrated behavioral health care system where individuals can receive appropriate timely, and quality health care.” It’s a resource Pinellas County residents can turn to if they need any sort of mental healthcare.

Six months after Errico’s doctor diagnosed her with an aortic aneurism, she went in for another CAT scan. “It had grown,” she says, “but it still wasn’t to 5.0. One of the nurses told me I should consider paying for the surgery myself. It’s very expensive.”

While she contemplated this, Errico decided to wait another six months. In the meantime, she relied on her faith and her music and the friends she had made in Italy, England, Canada and throughout the US, through music.

“So, I went back again after six months and had another CAT scan,” she says. “Of course, the doctor didn’t want to call it a miracle, but he couldn’t explain it. The aneurism was gone.”

Errico smiles and her eyes, blue as her pool, reflect a glint of Florida sunshine. She doesn’t need an explanation – she only needs to keep holding her ukulele, right against her heart.