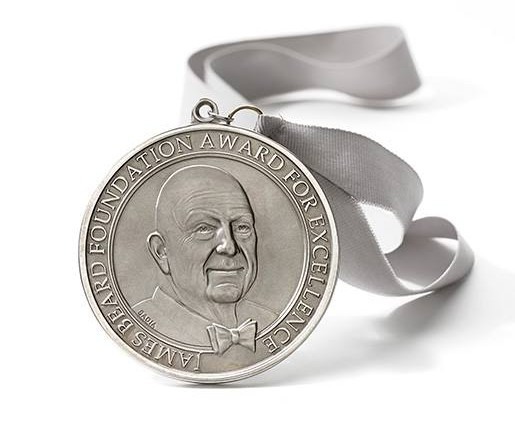 Get to Know the First Foodie Influencer

. . .
Writers, journalists especially, are champions of economical writing. They study how to convey the biggest punch or sum up a person’s accomplishments and acclaim in a few carefully selected words. And if they get it right, those phrases are snapped up by other writers.

So it is with James Beard who was crowned the “Dean of American Cookery” by the New York Times sometime in the 1950s, a label that has been repeated thousands of times in print and digital publications. Just ask Google, where a search of that title associated with Beard’s name returns millions of mentions.

How is that even possible? And wouldn’t he have gotten a kick out of that?

He did so love the spotlight. Beard called himself a “culinary gigolo,” a nod to his interest in all sorts of food. (That label gets far fewer Google hits, which may speak to the power of the New York Times or maybe that people don’t know what a gigolo is.)
. . .

. . .
Beard’s name has stayed in the spotlight long after his 1985 death at age 81, thanks to the culinary and writing awards that bear his name. The Beard Awards are referred to as the Oscars of the culinary world — another oft-repeated buzzy phrase and slightly ironic because Beard first longed for a career as an actor and opera singer.

The awards are overseen by the James Beard Foundation in New York, which operates out of the Greenwich Village brownstone he called home. His good friend Julia Child said something ought to be done to preserve the house where so many had partied and eaten fabulous food, maybe even his famous Onion Sandwich. Former Beard student and cooking school empresario Peter Kump led the fundraising efforts to buy the house and establish the foundation soon after Beard died. All three culinary luminaries are now gone.

In my food writing classes at the University of South Florida, St. Petersburg campus, I assign food writers for students to research and introduce to each other via a written assignment. They get the names of two writers — one dead and one living — that made a mark or are making a mark on the genre. It’s subjective, the prerogative of the professor, but I don’t think I would find many food writing connoisseurs who would deny the contributions of Clementine Paddleford, Toni-Tipton Martin, Marcella Hazan, Michael Twitty, Craig Claiborne, Diana Kennedy, Edna Lewis, J. Kenji Lopez-Alt and more. And, of course, James Beard. If I have inspired you to Google a few names, I am glad.
. . .

. . .
Nearly all of the students have heard of James Beard and vaguely know about the awards. It is news to them that he had a successful catering company in New York City, hosted the first TV cooking show (1946!), authored 20-some cookbooks, ran a cooking school and is the guy who first championed fresh, local, seasonal foods. He also became a master promoter of products, including Birds Eye frozen foods, another irony given his steadfast devotion to fresh, local, seasonal.

No student ever mentions the red bow-tie that was his signature adornment or who he was buddies with and influenced or that his early days in Oregon and escapes to Paris and London in his 20s formed his culinary outlook.

Only once in many semesters has a student gently alluded to his struggles with self-image because of his size or that he was a victim of institutional homophobia when he was kicked out of Reed College in Portland, Oregon, after being caught with a professor.

“Despite the weight that his name and legacy hold, it’s humbling to understand his rocky beginnings as a younger person in the early 1900s,” wrote one student.

. . .
The Wikipedia entry and other encyclopedic sort of places where students turn for information often don’t show a life in full. They produce resume fodder, leaving out the gray tones that are present in all of our lives. But there are other places to get a more complete picture of Beard.

The 2011 play I Love to Eat by James Still opens for previews on January 28 at freeFall Theatre in St. Petersburg. Veteran actor Matthew McGee stars in this one-man show in which the audience will learn about Beard’s big personality and deep culinary knowledge – and some might even get a taste of that curious onion sandwich. The name of the play comes from Beard’s seminal 1946 TV cooking show.
. . .

. . .
In the age of COVID and as the performing arts is just getting back on its feet, the idea of an actor making food onstage and passing it out to audience members is questionable. So, while McGee says the plan is for him to make Beard’s signature hors d’oeuvre onstage, the samples given to pre-selected audience members will have been made by staff wearing gloves and masks. Hard to image what Beard would have thought of that and all the COVID protocols actors and staff are following to keep theater going. They are certainly as nimble in their arena as Beard was in the kitchen.

One of Beard’s favorite foods was strawberry shortcake made from his mother’s recipe, who served it at her boarding house. I can’t help thinking that switching the onion sandwich for strawberry shortcake might be a fun tweak to the local production of I Love to Eat, incorporating local Plant City strawberries that are in season now. I think Beard would approve.

Since Still penned his play, there has been more introspection into Beard’s life and accomplishments. The 2017 PBS show James Beard: American’s First Foodie, part of the American Masters series, and a 2020 biography, The Man Who Ate Too Much by John Birdsall, filled in many of the gaps. The biography especially kicked off a new round of writing about Beard, thanks to many reviews.
. . .

. . .
The Man Who Ate Too Much sprung from an article that Birdsall wrote in 2014 for the now defunct Lucky Peach magazine. The premise of “America, Your Food is So Gay” was that three gay food writers — Beard, cookbook author Richard Olney and New York Times food editor Craig Claiborne — brought us to the place where the pleasure of food was the end game.

“Beard made it okay for us to be hedonists at the table,” Birdsall wrote in the article. “Even in his paid endorsements for Birds Eye and Omaha Steaks, Bird convinced us there was no shame in aspiring to be gourmets, the way most of us aspired to drive Cadillacs.”

In 2022, we routinely scroll through Instagram photos of brilliantly prepared food in full color, and have our pick of any number of cuisines for nightly takeout. It’s hard to remember that there were days when Americans weren’t obsessed with food as hobby, distraction and point of pride.

It’s fun, though maybe futile, to project how Beard might have adapted to the digital space where we spend so much of our time.  I am sure I would be following @JamesBeardOfficial — or some such handle — on Twitter, Pinterest and Instagram, maybe even on TikTok where he could tell us in 3-minute clips how to prepare his Fresh Apple Cookies or why 40 cloves of garlic isn’t excessive for a chicken dish.

He was certainly an influencer before we knew that was a thing, or even a profession.
. . .

You can find recipes, video talks on issues including sustainability, mental health struggles and pandemic innovations in restaurants, virtual discussions and events, and features on a diverse range of chefs, food creators and advocacy efforts at jamesbeard.org
. . .