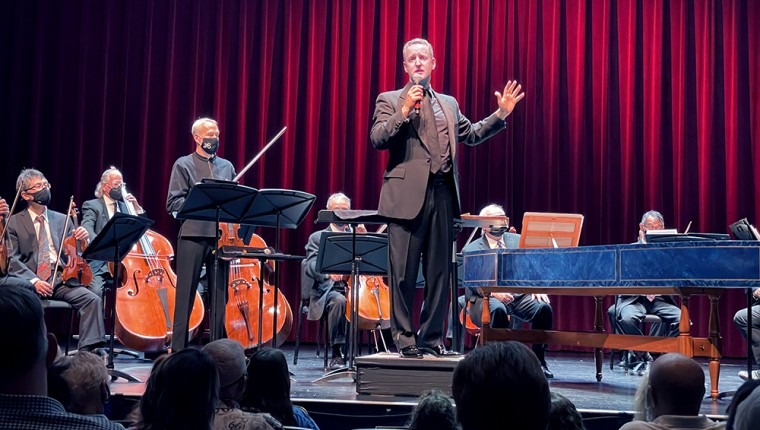 Florida Orchestra
Takes Listeners Inside the Music
of a Russian Classic

. . .
So you’re sitting in a concert hall listening to Igor Stravinsky’s Firebird, the first of his three famous ballet scores. Midway through, you wonder what the composer was thinking, why the music takes so many twists and turns, and what makes it such a magical experience.

Most of us have to figure all this out on our own, because conductors and orchestras are paid to play music, not chat about it.

Unless, of course, you attend the next Inside the Music program by The Florida Orchestra and music director Michael Francis, who on Wednesday will dissect Firebird before offering a full performance at the Mahaffey Theater.

“My desire isn’t to help people understand all the technical form and function of things – but I have a real passion for helping them see this epic art form in a new way,’’ Francis says. “So, we try to keep it good fun and real.

“In our previous Inside the Music concerts, we’ve never had anyone say that it was boring.’’
. . .

. . .
The orchestra offers pre-concert lectures and open rehearsals, but this format is different. Francis will talk about the various sections that make up the music as a whole, then launch into a formal performance to connect all the dots. It’s also affordable – you pay what you can at the door.

“It’s like a concert, but I’ll explain the music in depth in the first half,’’ he says. “I’ll try to unlock the music and see how it connects with the audience through a conversation with the past.

“Because in all these great works of art, such as Vivaldi’s Four Seasons or Beethoven’s Fifth Symphony, there’s so much we can learn about ourselves. Great music is a mirror to help us understand who we are.’’

Firebird was Stravinsky’s first big success as a composer. Of his three great ballet scores – Firebird, Petrushka and Rite of Spring – it stands out as the most luminous and tonally brilliant. From start to finish, the music grips us with exoticism, harmonic sorcery and biting rhythms that Stravinsky would continue to refine.

A fairy tale, Firebird describes a mystical bird that offers a magic feather to its captor, Prince Ivan, who in a moment of compassion sets the bird free. Ivan falls in love with one of 13 princesses under the spell of the evil Koschei the Immortal, who battles Ivan and awakens the bird’s magic.
. . .

. . .
Originally composed in 1910 for Serge Diaghilev’s fusion of art forms, the Ballet Russes, the music is most often heard as one of three condensed suites Stravinsky arranged in 1911, 1919 and 1945. But Francis pulls out all the stops for this week’s concert, which include all 22 sections of the original. Don’t worry about getting lost – descriptions of each scene will be projected above the stage.

“Firebird is such deeply satisfying music,’’ adds Francis, “and the full score is so much better than the suites.’’

Most of the short sections that make up the complete score can stand alone as miniatures, notably the electrifying Infernal Dance. Some of the music is ethereal and otherworldly. The finale is a hair-raising crescendo, a tour-de-force designed to shake the rafters of any concert hall.

“Firebird is almost overwhelming,’’ Francis says. “This really is the end of Russian romanticism and the birth of modernism. Stravinsky was an absolutely astonishing force, and we hear it in this music.’’

If you can’t make Wednesday’s program, consider one of two of the orchestra’s masterworks performances in Pinellas this weekend, which feature Firebird along with Tchaikovsky’s Piano Concerto No. 1. For details visit the.floridaorchestra.org/events.
. . .