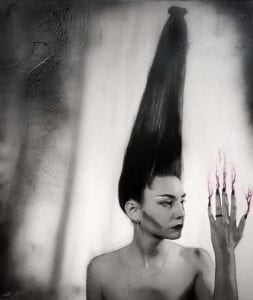 In 2010 I decided to do a body of work using original film images from the 70’s and 80’s, and enlarging them to work in different mixed media processes.  As with any new body of work there were challenges.  But the two primary ones were getting the film images to the size I wanted to work in:  60″h x 48″w and 72″h x 60″w, and printing.  Remember, the images I was using were from film negatives: 35mm, 220 and some 4×5.

The first step was to scan the negatives which I had been doing for some time using a high quality Epson scanner and pushing the resolution of the scan to print 20×24 or 24×36.  Once scanned the next step was to enlarge the digital image even further to the print size I desired.  To do this I needed software that would enlarge with little loss of sharpness.  I finally found Genuine Fractal.  It had good reviews and could enlarge with some loss of sharpness and slice the image into sections if needed.

The next challenge was printing.  I could have gone to a commercial print shop and had high quality images printed which would have cost a fortune.  So I settled on two approaches.  First I printed smaller images and pieced them together.  For others I went down to FedEx Kinko and had prints made on there plain paper plotter paper.  These printed 36″ wide and as long as I wanted, so i usually pieced them together in squares.

The printed images turned out good but for one problem, the ink didn’t provide for a dark black black.  I decided that wasn’t a problem since I was was going to use other materials such as charcoal, pencil and paint and could work the blacks.  The other thing I was concerned about was image sharpness.  Although not spot on sharp, they were sharp enough, little pixelation and since the images were large, they would be viewed a bit of a distance.

There you have it.  They prints were mounted on birch substrate frames I made.  in some cases texture was added to the substrate, in others, the images were flat.  And then I mounted each section with gel medium.  When dried I started to work the images with paint, charcoal, ink, wax and other materials.