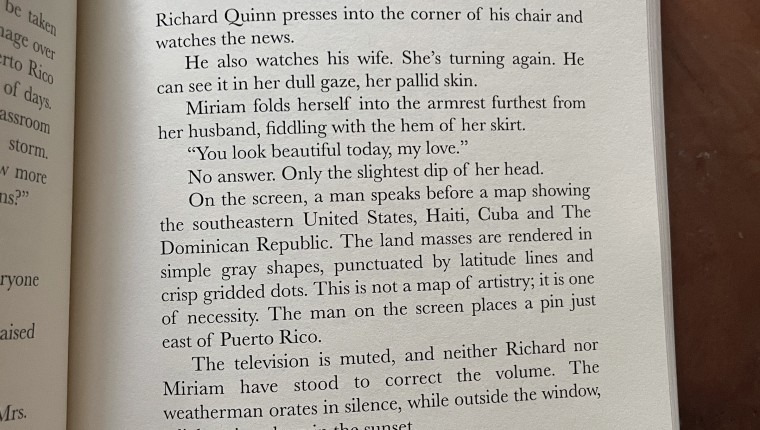 We drove to Charleston SC to see my first play, Stay, onstage at South of Broadway Theatre. Eugenie Bondurant and Chris Rutherford originated the lead roles in 2009 in a staged reading at the late lamented Gorilla Theatre. That was my very first staged reading when I didn’t even know what a staged reading was, so it’s lovely to be working with Eugenie and Chris again on the GASP! project. 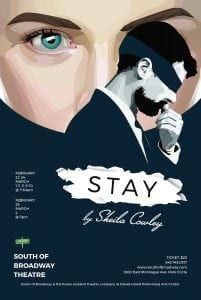 That reading was my introduction into workshopping and revising a script, and getting helpful feedback from an audience. With thanks to the Gorilla’s Bridget Bean, director Jim Rayfield and the amazing Fanni Green, who shared an early draft with them.

The play is an intimate thriller, the only one like that I’ve written. An eye surgeon convinces her husband he’s been blinded in an accident, to try and keep him from leaving her. But of course things go awry.

I worked with dramaturg Dana Lynn Formby of Chicago Dramatists on the script after the Gorilla reading, and she was outrageously helpful and told me many things that needed fixing. After more readings and many, many more rewrites, and more dramaturgy a couple years later from Chicago Dramatists’ Alice Austen, Stay had a beautiful production outside Austin in 2013 with the Wimberley Players.

South of Broadway Theatre’s Artistic Director, Kristen Kos, discovered the script on the New Play Exchange and she’s playing the lead. She doesn’t normally do that, but told me that it was such a lovely challenge she couldn’t resist auditioning, which is lovely to hear. 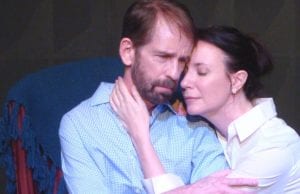 I rewrote the script a lot after the Wimberley production, which was beautiful and moving, with a wonderful cast and a set I found out later was a rare stage effort by Scott Wade, nationally famous as The Dirty Car Artist. Much of the rewriting was to simplify the staging, since director David McCullars and Aaron Johnson, an amazingly physical actor who runs a commedia dell’arte troupe in Austin, discovered that the script worked best if the actor playing the husband really couldn’t see, when his eyes were bandaged. So Aaron learned his lines and got off book early in the rehearsal process, and spent most of the rehearsals and most of each performance in the dark.

What I hadn’t thought about until I saw Stay onstage was how much trouble it was between scenes, with the stage manager having to move a blindfolded actor safely – and I hate long scene transitions. So I simplified the set and made the scenes more seamless, to make the next production easier. 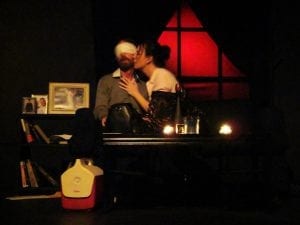 South of Broadway Theatre is a lovely black box storefront in a hip neighborhood in North Charleston. The production was directed by Daniel Hall Kuhn, with Kristen Kos, David Moon, Linda Gish and Rob Maniscalco. Everyone involved with the production was welcoming and loved the scipt. The performance had gorgeous, atmospheric lighting and an impressionistic living room full of windows, that I described years ago in the script and was startled to see come so vividly to life.

Thank you to Anne Reid for the great production photos.

Kristen was nuanced, moving and amazing in the complex lead role. I watched the Friday evening opening straight through, without looking at the script beforehand so I’d be better able to judge how it worked onstage, as an audience member. 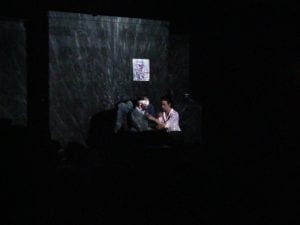 It was my very first script and my writing’s gotten better over the years, so I went back the next night with my notebook, and scribbled notes on all the moments that could use fine-tuning.

Stay was in the Charleston paper’s weekend section, and a reporter interviewed Kristen and me together the next morning, for the Charleston Post and Courier. I gave a workshop for South of Broadway’s writers’ group on Sunday, with materials from the Dramatists Guild, the New Play Exchange, PlayPenn and Chicago Dramatists. It was a large and lively group, enthusiastic about getting scripts out into the world, writing artist statements and finding opportunities.

Hilariously, one of the writers was the Artistic Director of Charleston’s 5th Wall Productions, a cool theatre that does new work and that’s rejected my scripts many times. I laughed about it when he introduced himself, since for every good thing that’s happened with one of my scripts, 98% of what I send out doesn’t get chosen.

He couldn’t place me at first, but partway through the workshop I mentioned The Burlesque Astronomy Play, a script I’m currently developing about science, art and femininity. There’s burlesque dancing, abstract art and onstage experiments, and one of them is plugging in a big dill pickle so it glows. When the AD of 5th Wall heard “Burlesque Astronomy,” he pointed at me and yelled, “The pickle play! You sent us the pickle play!”

It’s good to know that’s how that script gets remembered, with a pickle generating light, the last image in the play.