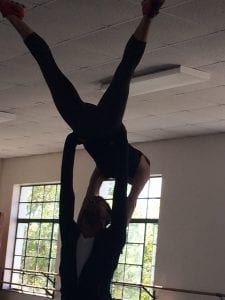 I got a draft of Madness together enough that I could send it out to actors and start scheduling the first table reading. And got back to work on Meridian, war and love, Greek gods and PTSD, a script I’ve been working on for a couple years now but keep getting interrupted. And we’re still rehearsing Air-Earth-Fire-Water every Tuesday. I revised the second script, Physics Boogie, just before rehearsal.

My short play Teatime is in festivals in New York City, Sydney and Dubai this month. It’s an absurdist hopeful tragedy set in an abandoned library, where people under siege are making home and family with who and what they have.

The script was inspired by a moment in the film of Charles Dickens’ Nicholas Nickleby, when Nathan Lane is leading a traveling theatrical troupe who seem to be picnicking in a peaceful forest, that turns out to be a stage backdrop. When his wife arrives with tea, his wife is a burly man in a floppy hat and nobody thinks that’s unusual – that’s their family. And that got me thinking, a couple years ago.

I first workshopped the script in 2016 with Eugenie Bondurant, Vickie Daignault and Lisa Powers Tricomi. I got a lot of helpful feedback and did rewrites, and was fortunate to be invited to work on Teatime with the Association of Theatre in Higher Education’s New Play Development workshop this past summer. 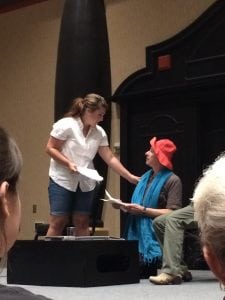 That was the second time I’d been part of the ATHE workshop and it’s a wonderful experience, amazingly helpful for the script. I worked with director Pam Pepper, dramaturg Norman Bert and scenographer Dahlia Al-Habieli over the summer via phone and email. They asked great questions and had excellent ideas, and the script grew from one that wasn’t set in a a specific location, to one rooted in the abandoned library, that inspired deeper characters and details. I rewrote several more drafts before we all met in person at the ATHE conference, for four days of rehearsal – and rewriting – before the staged reading.

Our cast was Robin Stone, who I was lucky to work with on Rewrite with the year before, Suzy Devore from Hillsborough Community College in Ybor City, and Jasmine Fuller. Everyone was a college theatre professor except Jasmine, who was a recent theatre major. I’ll just say that college theatre professors are wonderful to work with, and I’m grateful to the wonderful USF professors and students I’m fortunate to work on scripts with. Every time Pam wondered about a moment or Norman questioned a line, I knew that was something I needed to look at.

And even though it was a reading at music stands, Dahlia gave me so many lovely ideas about the set that really helped to shape the story and the dialogue. She came in with hundreds of pictures, of light coming in bombed-out library windows, of library chairs, or old rotary phones – and she asked cast and creative team to pick which ones resonated with them. She’d take away the pictures people didn’t respond to, and by the time she’d gone through all the different possibilities for pieces of the set, we had a pretty clear idea of what it all might look like. 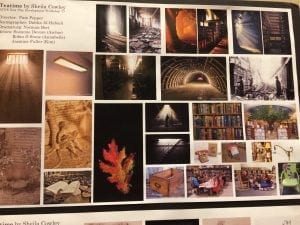 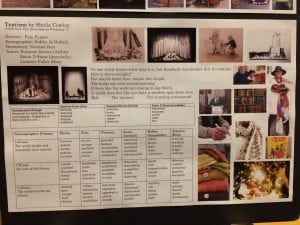 Everyone who helped me work on the script was pretty thrilled that it got accepted into three festivals in different countries.

Short+Sweet Dubai was first, February 9-10. I chatted with the director, Roli Agrawal, via WhatsApp. She asked great questions, like about many times the color red is mentioned, and she had interesting ideas about simple but imaginative staging.

Short+Sweet Sydney was next, February 24-25. I communicated with the director, Matthew Taylor, via email. He found the absurdist quirks intriguing and they gave him fun things to play with in rehearsal. Matthew had intriguing ideas about the characters’ mindsets and motivations. He sent some lovely pictures of the young and diverse cast, and the poster he designed. 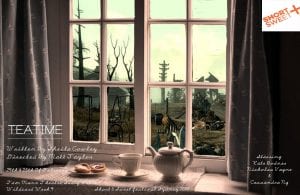 Schreiber’s Shorts, at T. Schreiber Studios in NYC was next, February 28-March 4. Director Crystal Edn also asked good questions and was enthused about the script. My brother and sister-in-law and my cousin all got to go to the show, and the actor who played Annabelle got in touch later to say that he enjoyed the play and had read my full-length play, Flying, for a NY competition.