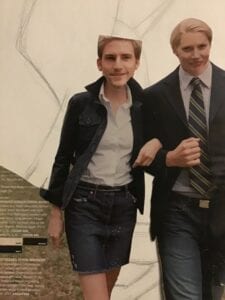 Excerpt from my book “PHI”

The book is still in its beginning stage of just putting ideas down in some kind of order.

-Middle of Chapter One-

-Taki stood up, pocketed her things and headed to the pull up bars.  Taki hoped the run with Gypsum would go much better.  As she approached the destination, Taki noticed Gypsum stretching already at the bars.  Gypsum is a lot older than Taki but she acts younger most of the time.  Besides her job as a high-school teacher she doesn’t have any responsibilities or hardships in life.  She’s white, privileged, and a college educated economic major so she’s responsible and smart with money.  Gypsum came from a two working parent household and her parents are now retired.  Her father is partially middle eastern thus assisting Gypsum with absorbing the rays of the sun.  She has no worries and she’s crazy as hell.  Once Gypsum gets focused on an issue it just doesn’t disappear so easily even if she says she is over it.

Gypsum has long straight black hair.  It hangs to the middle of her back when it’s out but it’s up in a ponytail wrap around and so it doesn’t hang at all.  Gypsum wore a tight ribbed white tank top and tight black spandex shorts.  Gypsum was a vegetarian until she started dating Taki and that meat is sticking to Gypsum’s hips giving her more curves than she has ever had.  Even though Gypsum is fixated on ass and how she doesn’t have one, she has an ass, it’s not huge but it is round and cushy.  The way her knees knock together not only pushes her butt out but it gives her a deceiving sense of innocence.

Gypsum is bent over touching her toes as Taki approaches.  The sight instantly sends thrills to Taki’s krotch.  Gypsum knows Taki is there.  Gypsum knows everything, that is why it is so annoying that she acts the way she does.  Taki licked her bottom lip and used it to moisten the top like she’s applying chapstick.  She walked all the way up to Gypsum until her pelvic mound was against Gypsum’s ass.  “Hello Taki, “Gypsum greets. Gypsum’s submissiveness enables Taki to freely express all of her masculinity.  In other words Taki found her dick with Gypsum.  Gypsum stands up and Taki wraps her arms around her and pulls her in.  Taki put her face on Gypsum’s neck and inhaled. Mmmm, Sandalwood.  Probably a spell inducing potion.  Taki doesn’t care.  It’s too late for any of the disclaimers.  Strangely, even though Taki has multiple lovers, at the end of the day she wanted to be with Gypsum.  Gypsum accepts the affection proudly, smiling at the onlookers in the cars passing by.  The pull up bars are near a busy road way on the other side of a small park by the Lake.

Gypsum releases herself from Taki’s embrace and turns to face Taki. “How is Mona?” She asks Taki.  Taki, startled, doesn’t answer.  She can feel the energy getting dark.  Taki replies, “ The sun is setting, let’s start this run.” She turns and starts to jog.  Gypsum follows the lead.  Taki can tell that she is holding her tongue.  “Come on Gypsum I know you have much to say,” Taki insists.  “I’m just happy to see you,” Gypsum remarks. Continuing on, “ So what’s your status?” “What do you mean?” Taki asks. There is a slight curve in the path around the lake.  The pace of the jog has increased slightly.  “Plus or minus?” Gypsum continues to be vague.  I’m, clean Gypsum, I’ve been thorough.” The pace picks up even more.  “Are you pregnant!?” Gypsum shouts.  Taki stops running, but Gypsum continues on.  Taki has to speak loud enough for her voice to carry.  “YES! … Can you stop running?” “I told you, you were going to get pregnant! I’m out!” Gypsum shouts back. Taki can’t believe her ears.  She thought that she was prepared for Gypsum to bounce but now that Gypsum is confirming that she wants no part of the pregnancy it stings like hell fire.  Taki’s face is full of hurt.  Her emotions change from pain to confusion.  Gypsum is still running.  She’s about one hundred yards away now.  Taki takes off at a sprint.  As she increases speed her anger increases.  When she is about fifty feet away she yells, “but I love you!” Gypsum turns to face Taki and is still running in place but moving backwards slightly.  “You’re just feeling vulnerable.”  Closing in, ten feet away and upon hearing that Taki leaped into the air, brought all the emotional frenzy into the Silver Moon of chi.  A move that Taki has only read through but never actually performed.  She closed her fists, rotated her hip and pointed her knee at Gypsum’s face.  Before Gypsum could turn or grab for her spell bag she was hit hard on the side of her head.  Gypsum fell to the ground with Taki landing one foot over her waist.  Facing the traitor Taki is still very cautious and trying not to fight recklessly because of the emotions.  The voice of Lady Reason speaks, “Remember that there is a time when emotion will defeat you, when emotion will carry you to defeat others, and when you will defeat emotions.  Right now emotion is your ally.”

Taki stares at Gypsum’s stunned face while the bitterness scatters through her body one by one, simultaneously breaking their prison walls to bond together to form a vicious disease to eat away all the good cells inside her.

Taki throws her voice into the air releasing a dragon roar which is an internal skill that transforms sound into a form of active chi that travels through the enemy causing great internal damage.  At the massive sound pressure, Gypsum is jolted awake and the vengeful chi forces her to stomach to tighten.  She spits up blood.  Gypsum licks the blood off of her lips and swallows hard.  Clenching teeth and body, breathing slowly through the pain, she pulls Taki’s gaze into hers.  Gypsum’s eyes appear to be changing color, from green with glimpses of red to a yellow and brown intricate pattern.  The eyes draw Taki’s attention and focus, filling her with love and desire. They are buying time while Gypsum attempts to regain some strength.  Taki kneels to a straddle letting the wrong emotions befriend her.  While a person passing might think the lovers were about to engage in foreplay they couldn’t be farther from actuality.  Suddenly Gypsum snarls, “I’m fucking somebody else!” and kicks Taki in the back of the head.  Taki hurls face forward over the top of Gypsum.  She is snapped out of the trance and quickly puts her hands down on the ground in front of her.  With a push off she is able to flip back to a standing position.  Gypsum flipped herself up, seizing the freedom.  They faced each other in a fighting stance, Gypsum is the first to attack.  Her right shoulder is first to move causing her fist to drag giving her strike away.  Taki anticipates and blocks with the left arm in a sweeping motion, she holds contact until her right hand can make contact by a similar motion.  The left hand returned and moved the attacker’s arm out of the way making room for Taki’s Snake Fire fist, with the gloved right hand.  The punch made contact with Gypsum’s sternum forcing her back off her feet.  Gypsum yelled something in Romany which is the official language of gypsies, and levitated back to landing level on both feet.  Her head twisted back first, her torso following, gathering strength for the next attack. She spun her weight, stepped with the left and roundhouse kicks with the right.  This was just a fake out to distract Taki from noticing that Gypsum inserted her hand into her spell bag attached to her hip.  Gypsum has studied Wicca since high school and is very skilled in it.  Taki is forced to duck and instead of backing away and going for her throwing knives on her left forearm she moves closer and grabs a hold of Gypsum’s hand before she could pull it out of her spell bag.  Gypsum’s free arm reaches for Taki’s throwing knives in what seems to be all one motion grabs a knife and stabs at Taki’s right hand which has a grip on her hand stuck in the spell bag on her waist.  Ting! It hits the glove with no penetration. Gypsum is focused and determined to win.  Her arrogance will not let her be defeated by her lover.  Taki is an undefeatable warrior who will not back down.  They will not stop until the other is thwarted.

Gypsum tensed both hands tightly into fists. Her breathing is heavy in her throat.  She realizes that behind Taki’s stare is a destructive force that is hard to fathom.  How easily love changes between these two.  Taki is covered in sweat, temples, palm, and back.

Once the hand comes out of the bag it surely will have spell crystal residue on it which will be just as effective as a handful.  “You should not be so blatant of your emotions –

CHARACTER DESIGNS and CHARACTER STUDIES FOR THIS BOOK 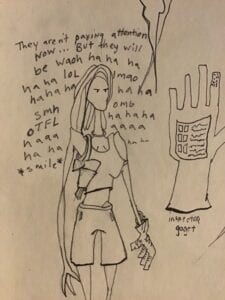 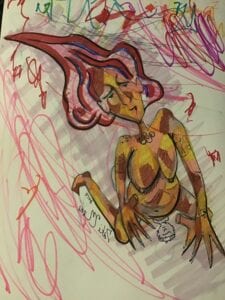 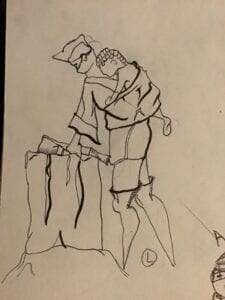 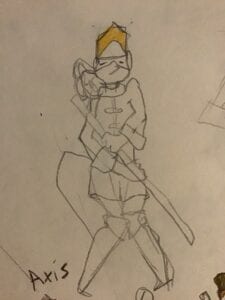 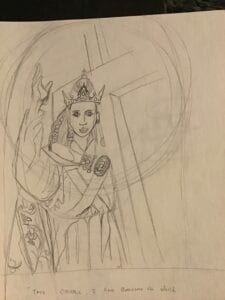 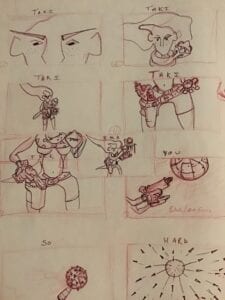 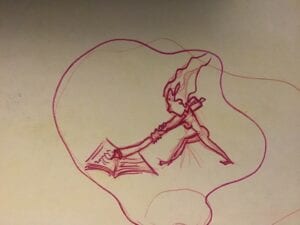