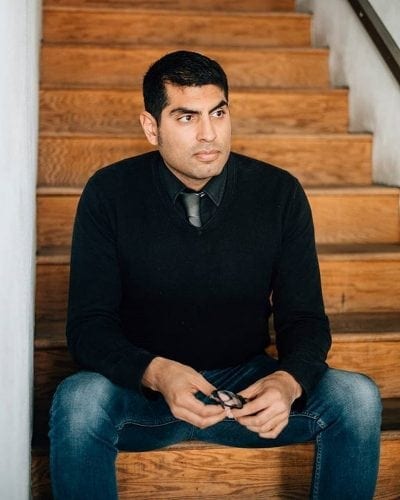 St. Pete probably isn’t the first place you’d think of when you think about the animation industry–and you’d be completely forgiven for that. Esteban Valdez, owner of St. Pete-based animation studio Echo Bridge, is beginning to change that. Echo Bridge began as a solo project over 10 years ago and now employs Florida-based animators who love their craft as much as their sunny stomping grounds. The always-on-the-go Valdez took some time, while making an animation delivery no less, to talk about the state of the industry and starting his own company.

Which animations inspired your early studies?

When I was little, it started off with the typical Disney, Mickey Mouse stuff, which I wasn’t really enthralled with. I saw the film Akira in high school, and the level of artistry and the type of story that was being told blew me away—the narrative was very cerebral. I absolutely loved it. The way that it looked played on me a lot, because it was like a painting in motion, and like nothing I had ever seen before. That was what I really wanted to do, so I dedicated myself to doing it. Akira was what ultimately drove me to study as much as I could.

You talk about art being “psychological and philosophical” as well as being a “mental and emotional solution and resource” on your website, which I agree with. Can you unpack those descriptions a little bit?

I think the biggest question is: what is art for? Why should we place any value on it? Why do people go out of their way to be uncomfortable, to write or paint or draw or create, sacrificing so much just to make this piece of art—why do we feel the need to do that? We need art because it really speaks to us. When we watch a movie and it changes our perspective, we are able to see from a different point of view and empathize with another person or object—that is what art is for. It’s a reflection of ourselves and of society. Society needs to look at itself every now and then and say, “maybe we can use some improvement,” or “this is what it means to exist.” Art is a philosophical tool.

Animation, in its root form, means, “to bring to life,” but it also needs to create believability of life. So essentially what we are trying to do is to make people suspend their disbelief in what they’re seeing in front of them, and to have a sense of empathy with whatever we have in front of us. It’s something like psychological magic—to make somebody feel for a cartoon mouse on a screen, or to laugh along with a lamp. We don’t really give it credence, but its actually really surreal and absurd to do that. So, now that you have that ability, that understanding, then what do you do with it? And where do we go from there? And that’s where I feel like the conversation stops. Like, we didn’t even get to that question, as an industry. I feel like we shot ourselves in the foot and sold ourselves short. I think because of that, people have really brushed animation off as novelty. And that’s a shame. The animation industry is such a small community, a niche community, that it often becomes its own echo chamber of ideas.

Is that part of what led you to start your own production company?

Yes. I while ago, I was working on a Nickelodeon production, but I wasn’t really loving it. I did everything I could to take care of my team, but being seeing the business side of animation, how the sausage was being made, looking back on it now, it makes me feel a little sick to my stomach. After my contract ended, I just wanted to do things on my own.

I thought I would just get a job as an animator somewhere, go to work, then come home and make my own thing. At the time, I started working on my first short, “A Lonely Road,” which was very bare bones. I had a crappy laptop and a 4” by 6” tablet that I was animating on; I did it on my bed because I didn’t have a desk—I would sit there early in the morning or in the wee hours of the night with my little tablet and try to make a film that spoke to people.

I was able to start my business because of that film, because it started to garner me some work once it got into the festival circuit. It ended up resulting in a monetary gain, even though I didn’t expect it. At the time, I didn’t have any aspirations to start a company or studio, it was just me—when I started business officially as Echo Bridge in 2008, it was just a freelance operation.

Coming to Florida and being away from LA, New York, and the industry as a whole for a few years gave me a new perspective. That turned into me realizing that I didn’t like working for big businesses, I liked working on my own. I’m not anti-Hollywood, I just don’t like the way people do business there. Looking back at all my time working as a corporate artist, I knew none of it worked for me.

How did you end up calling St. Pete home?

After the 2008 economic crash I was doing freelance work while living off of my savings, but the opportunities I was looking at at the time had dried up. After about two years of living off my savings and doing freelance work, I ran out of capital. My parents, at the same time, had lost their home; my dad lost his job, and my mom’s job relocated to Tampa. We all decided we would go to Tampa and see what happens.

The work started to roll in when I first moved to the Tampa area. Day one I got a phone call from a friend who was looking for help on a TV show they were working on, and it kind of took off from there. Florida and St. Pete have been very good to me. It’s got its challenges, but I’ve been grateful to be here.

Are there any specific works that you have gotten a lot of feedback on?

“Our latest short film produced by Echo Bridge, ALONE, has gotten a lot of attention. It’s making a U.S. Premiere at the Miami short Film Festival this November (8 to 10), 2018 and also screening at the Miami Independent Film Festival. We’ve submitted to over 120 festivals, and it’s been getting a lot of attention. Early screenings were also very positive. We wanted it to emotionally provoke the audience and the results prove that we’ve been successful in doing just that.”. Early screenings were really positive and made people feel something.

Any particular reasons you think it got so much feedback?

I think because it’s an honest project. One of the challenges was trying to make it feel like a moving painting. It sort of also exists as an antithesis to a lot of modern animation, which is very snappy, with lots of talking and narration, where as ALONE, is a meditative piece, so it feels like a breath of fresh air.

Are there any projects that that didn’t meet your expectations; one that perhaps taught you something?

All of them, every project. I feel like we fail our way to completion.

Specifically, there was a recent project that we completed where we met our deadlines, stayed within budget, etc. It was a last minute project—we should have said no and left it at that, but it was with a company we had wanted to work with for a long time, and we lowered our rate to accommodate them. The entire way through we got good feedback, but after the final delivery we didn’t hear back for a few days; I decided to send a thank you card. We ended up getting a message back that was pretty mean-spirited. My first response was to question how we got to that point, what we could have done better—but I realized that the real conclusion was that we needed to be much more particular with the types of work that we take.

As a professional artist making a living from your art, what advice would you offer to young animators looking to make a career out of their work?

I think they need to ask themselves why they’re doing it in the first place. There are two types of people in the animation world—those who tell stories and those who make other people’s stories. A lot of times, people end up following the opposite career path than what they actually want. There is room for everybody, I think, more than enough, but I think what there isn’t enough of is time. The sooner somebody realizes what kind of career they want to have, what kind of life they want to live, that will help them out in the long run.

In my lectures and talks, and sometimes in general conversations with students and people coming to me for advice and direction; I ask people to stoically imagine that they’re going to die tomorrow.  I ask “what do you wish you would have done, what’s the first thing that comes to mind, knowing that the end is eminent?” My approach is very Socratic—I think people looking for advice or answers need to implement a method to their wants and be able to provoke in order to understand what they’re looking for. Thinking is actually hard—in your brain you have to play different roles: the protagonist and the antagonist, the instigator and the moderator. You have to let all these characters within yourself go to war and ask questions until you feel enlightened in the end. Once the path is clear, the only thing left is just to walk it.