Last week I asked some difficult questions about the responsibility of the writer/creator in fostering authentic storytelling. This week, I want to dig a little deeper into investigating how and where to seek answers.

I’ve been seeking help from other people I know and trust, and other people working in the tv/film industry in particular, hoping that they would provide some insight into these difficult questions. Everyone agrees — we want more diverse stories told in our commercial art spheres. But their answers on how to do this exactly and who should be doing it have occupied such opposite ends of a spectrum that I truly am questioning how to hold all of the contradictions.

I spoke to a producer friend, one of the few Black women working at this major production house where she is employed. She told me that getting stories made that center women of color, in particular, is the most important thing, now matter how it gets made and who is telling the story. There were caveats there, of course. Her example being that production companies with seriously robust resources should be questioning why they often choose to give a script centering a marginalized person or experience to a director who does not come from that background and is so established in their career that they really don’t need the opportunity. That resonates. Doesn’t that acknowledge my limitations? I am just starting out. What power do I have? The scope and scale of my projects, so far, have been extremely limited. This poses challenges in achieving the kind of equity and support I someday hope to be able to offer artists and myself because I have to be very specific and small in the work I make right now. But don’t I have a certain amount of power now? Couldn’t I say that the script needs to change or that I need a co-director, for example? 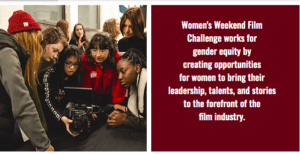 I attended workshops with Jennie Snyder Urman, the showrunner of Jane the Virgin, and Kristina Thomas, a tv writer who most recently worked on HBO’s Lovecraft Country through the incredible Women’s Weekend Film Challenge. Both had experiences in which they created stories outside of their own lived experience and identities. Both mentioned doing A LOT of research, talking with folks who did have the first hand experience, and bringing writers on board who could speak authentically to the identity and experience being portrayed.

I also talked to a theatrical director who I similarly deeply respect. They communicated that it is hurtful when white women think it is ok to tell a story that centers a Black woman. Doing so can fetishize the Black experience, which is a reflection of white supremacy. Just because you can tell this story, because you have some money on the table, or you’ve done your research, doesn’t necessarily mean that you should. In a world in which Black, Indigenous, People of Color’s stories are so often co-opted and appropriated by white people, this also resonates.

I’ve come to a crossroads in my life. It’s the first time that I feel supported as a creative artist by arts companies and organizations to make my own work. That is power. That is recognition. I am the Artistic Director of Experimental Bitch Presents, a company whose community, artistic work, mission is deeply committed to amplifying diverse femme queer voices and taking risks in performance. That risk is formed not only in the content we present but also in the artistic process; it means asking these questions, the ones I am most afraid of saying out loud for fear of hurting people, of retaliation, of saying the wrong thing, of exposing myself as an imposter, as someone who has more work to do, and of someone who makes mistakes.

I have worked hard to get to this place. I’m constantly grappling with the sacrifices I’ve made to pursue a life in the arts–financial stability, time with family, birthdays and vacations, sometimes even my mental and physical health. (You might think that is messed up. It is. But it’s what the elitist arts industries demand from those who want to rise through the ranks of this misguided hierarchy.) I also don’t take it for granted. I am constantly aware that I have the privilege to pursue this, that I have a community. And I am hungry for this risk. I am hungry for this change.