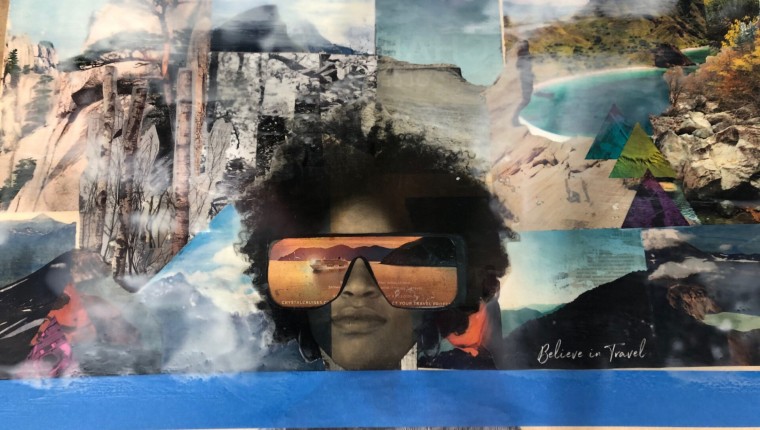 I finally applied the first layer of encaustic wax! I have to admit, it was not what I had expected, based on all the tutorials I’ve watched. You’d think they would have prepared me for that first brushstroke, but nope, this was bound to be so bizarrely different from actual painting that it would feel weird no matter what.

However strange that first stroke felt, I was instantly in love! I love how, after I spread the wax on the surface and it started drying (far too quickly for my liking), I was able to use a heat gun to reheat and spread it out a bit, and the way it just manipulated under the gun and spread, then lay smooth on the surface… it was so satisfying. It dried into a simultaneously shiny and hazy finish. The finish is perfect for the dreamlike imagery I create. This final application of heat is called fusing.

For my next piece, I am going to use it not just as an overlay. I’d like to incorporate it from the beginning, as the “glue” that holds the mixed media objects I apply. Based on the application, it will lend itself perfectly to more organic materials, which tend to be difficult to maneuver with acrylic gel and other adhesives.

One of the best things about encaustic painting is that it’s naturally archival; I don’t have to use a varnish to preserve the piece. Encaustic wax was reportedly used in ancient Greece to weatherproof ships, a testament to its impenetrability. Ancient Greeks also used encaustic painting in funeral portraiture, and the works are in terrific condition despite their age. Some of them are up to 2,500 years old and still well preserved. Considering that Renaissance oil paintings are only about 500 years old and cracking, with need of extensive restoration, these ancient Greek encaustics are performing much better with time.

You may ask, “why has it taken so long for you to incorporate encaustic into your art practice? It’s not like it’s a new, revolutionary technique.” That’s true. I remember years ago, back in 2014 when I studied large format photography at Penland School of Craft in North Carolina, there was an encaustic painting studio and I was mesmerized. The way I felt was comparable to receiving your dinner plate at a restaurant and looking at your partner’s plate and thinking, “man, I wish I had ordered that.” I wanted so badly to take that class, I would have ditched the dark room class in a heartbeat! But it was not in the stars at that moment.

I didn’t forget about encaustic, but sometimes time, life, and personal choice makes a path veer and bend and loop, so that the distance from point A to point B ends up taking much longer than if you traversed the straight and narrow. I’m not usually a straight and narrow path kind of person, occasionally to my own chagrin (and to the chagrin of some others around me). The bendy, loopy path, while sometimes difficult, can also be more interesting and exciting than the straight one. Mine sure was! Either way, here I am, delving into encaustics and loving every moment.