I am invariably drawn to using pattern, texture and color in my work. Layering is a particularly important aspect, as well as scraping back and drawing into the surface in my paintings. Why are these elements appealing to me? I have realized that it’s the story that takes form as these components are built up, combined, torn down, recombined and built up again that is compelling. I have a driving interest in the dichotomy between perception and the reality beneath the surface of things; there is more going on than what meets the eye. My process allows me to create a sense of the richness as well as explore the ambiguity within that difference.

On the flip side, I am also drawn to a minimalist approach. Who hasn’t been struck by the simplicity of a line, color or texture when each allowed to stand on its own? Of the numerous processes that lend themselves naturally to a minimalist expression solar printing, such as lumen and cyanotype prints, particularly intrigue me at this time.

In an earlier blog, I discussed the use of the cyanotype process to explore an idea I am considering for my Emerging Artist Grant artwork. I feel an imperative to respond in some way to the climate crisis through my practice and, in particular, to its affect on our coastal environment. Certainly, the beautiful cyan blues of this particular process evoke our waters. The negative image effect created by the exposure to the sun, focuses one’s attention by its very simplicity, creating that sense of ambiguity I seek of something there but not there. 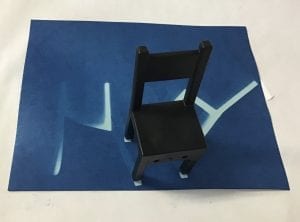 By using a dimensional object such as the miniature chair (left), rather than items that generally lie flat, also expands the ambiguity of the images produced. Different times of day, whether it’s cloudy or clear, yield different and evocative results. 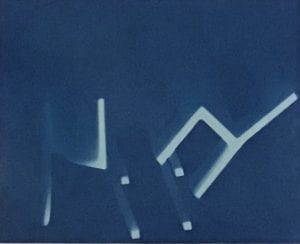 The two images shown were created with three chairs arranged in different positions. Due to the late afternoon exposure, the chairs, such as the one above, cast long and vaguely discernible shadows. If you are able to enlarge the image on the right, you may be able to detect some of it. What do you think?