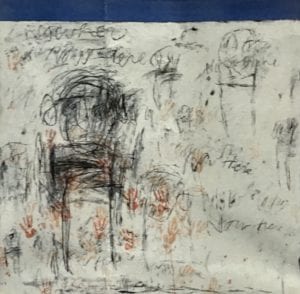 A couple of weeks ago, I was at the opening of “Louisa Chase: What Lies Beneath” exhibition at the Leepa-Rattner Museum of Art. It was followed the next day by a superb, in-depth presentation by curator, Christine Renc-Carter, covering not only the influences on Chase’s artistic growth but also the emotional forces behind it. While the latter was not identified specifically, it was clear that Chase had a particular drive that came from a deep emotional source. Over time, Chase developed an intense visual language through her mark making. Layer upon layer, scraping back, incising, over and over. The result is nuanced, rich and expressive, a visual autobiography of what she was attempting to discover/release within herself. The experience of seeing Chase’s work has effectively lodged itself in the back of my mind and is surfacing periodically with the question, how do I reflect myself through my own work? 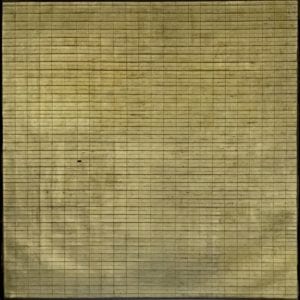 Part of my first discussion his week with my mentor, Carol Mickett, focussed on how I express just that. I commented that one artist I have long admired is Agnes Martin. There are two aspects of her work that resonate with me: the intellectual element that is minimalist and the expressiveness in her line, always hand-drawn. The combination of the two, explored intentionally throughout her mature career, is both highly personal and universal, born of a driving spiritual quest that also speaks to a similar desire common to us all to one degree or another. While Chase’s work is emotionally charged, Martin’s is esoteric. Though Martin is often labeled a minimalist she, however, rejected that term, considering herself an expressionist. Seen together, Chase and Martin are two sides of the same coin; I relate to both.

Carol and I had a lengthy discussion about where/how I am found in my work through the use of the chair motif. At the end of it, Carol left me with this directive: describe myself as a chair, versus a chair as “other.”

So, what side of the coin am I?

I will be introducing my mentor, Carol Mickett, this coming week – stay tuned!

If you have the opportunity, be sure to check out the current exhibition, “Louisa Chase: What Lies Beneath,” at the Leepa-Rattner Museum of Art