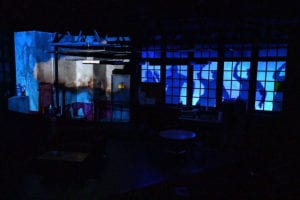 The best socially conscious works stir our hearts and minds and offer an element of intimacy, affection and relatable humanity that transcend contrivances.

After all, there is always an agenda while creating — especially if you are dealing with issues of immediate concern such as income disparity, labor rights and racism. Inserting these big Truths with a capital “T” can hinder the writing process for a playwright wishing to write an immersive story.

One misplaced, preachy monologue can take the audience out of the moment and distract them with stilted, instructive speech that’s tantamount to a cellphone chime.

In Dominique Morrisseau’s Skelton Crew at American Stage, Morrisseau provides an example of how a masterful playwright can engross us in a relatable drama. The gritty but endearing play makes us laugh and ponder societal injustices without hitting us over the head.

A personal touch and a strong sense of place inform Morrisseau’s writing. The playwright’s love of her hometown shines in Skeleton Crew. 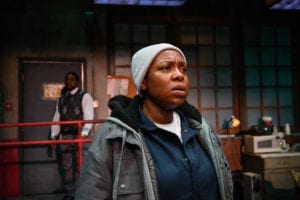 In a Huntington Theatre interview, we learn how a troubling school episode validated Morrisseau’s mission to write about Detroit from a perspective not typically seen by outsiders.

When a white professor at Dominique Morisseau’s alma mater asked the almost entirely white class, “hat do you think of when you hear about Detroit,” someone yelled out, “degenerate.”

This exchange happened in Morisseau’s boyfriend’s (now husband) class, and she says that when her husband told her someone had equated Detroit with the word degenerate, “I felt like he had just slapped me.”

Morisseau returns to this story as an explanation and moment of passionate inspiration for her Detroit Cycle adding, “I [wrote] three plays about Detroit because I love Detroiters, because I love my family, and because I am practicing self-love.”

Hometown love. Sounds overly simplistic, but it’s what elevates the writing in Morrisseau’s script, delivered with the nuances and subtle detail of a skilled playwright.

Author Lauren Groff uses a similar technique. In Bookfox’s article, “How 50 Famous Writers Find Inspiration,” we get an insight into a similar transcendence. 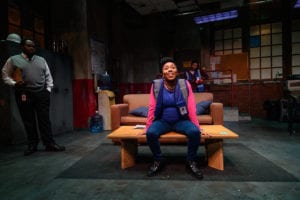 For Lauren Groff, ‘the most important element of writing is the selection of the subject matter.’ In writing, she had to find ‘a topic that was dear enough to me that I would do the work and spend the time that’s necessary to get to the end of a final draft,’ which is how she decided to write a love letter to her hometown of Cooperstown NY in the form of a novel called The Monsters of Templeton.

When the idea came to Groff, she was lonely, living in California, and missing her hometown. Thus, she decided to channel that longing into writing: ‘The book was born out of homesickness and a desire to create a loving, warm world around me.’

The idea that a writer would re-create a setting that feels like home pervades throughout Skeleton Crew — even if it’s not a traditional nuclear family but a troupe of co-workers at a Detroit auto part manufacturer. 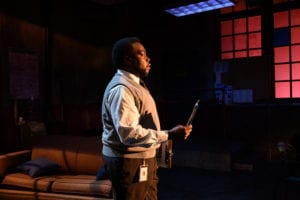 We encounter a veteran lesbian (Faye — Dee Selmore) whose late partner was also the boss’s mother; a ‘f***boy/thug-lite’ on the verge of maturity (Dez — Rasell Holt Dez); a young pregnant single woman (Shanita — Camille Upshaw) from a staunchly working-class family and that aforementioned boss with complicated conflicts of interest (Reggie — Enoch Armando King) who grew up with severe disadvantages.

Skelton Crew’s surrogate family of misfits is one of the most amiable you’ll root for — they make you laugh and tear up in just the right ways without ever feeling manipulated.

The dialogue is natural and snappy without that overwrought Gilmore Girls-esque air of artifice a less loving writer foists upon an audience. Morrisseau’s characters are well-rounded and believable. She breathes life in them. We see her in them but never too much so.

Skeleton Crew also confronts disparities and injustices that stay with us long after the final curtain. While there are rants, they are wholly organic. They light a fire in our bellies and do anything but disenchant. 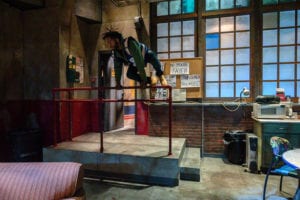 Selmore’s performance as a lovingly wrought factory worker is reason enough to see American Stage’s production of Skeleton Crew and appreciate the glimmers of Morrisseau’s hometown love, wisdom and sass that she masterfully conveys, sashaying across the stage in her nightgown and belting out Aretha Franklin’s “A Natural Woman.”

Writer J. Sebastian Alberdi captures the play’s captivating cast succinctly: “Morisseau’s characterization and writing of these four characters in Skeleton Crew is so compassionate and free of cliché that it will be hard to leave the theatre without feeling for and appreciating the makeshift factory family by the time the curtain falls.”

Dominique Morisseau’s plays have been produced at Lincoln Center, the Classical Theatre of Harlem, the Public Theater, LAByrinth Theatre, Premiere Stages and many more.

She’s a MacArthur Genius Grant Fellow and the Tony-nominated book writer of the new Broadway musical Ain’t Too Proud – The Life and Times of the Temptations (Imperial Theatre).

You can hear Dominique Morisseau talk
about her work at macfound.org/fellows.

Hear Morisseau on NPR, talking about Ain’t Too Proud.
“We make space for the people that may not be the traditional theater audience.
Say amen and speak out loud if it’s in response to the show.”