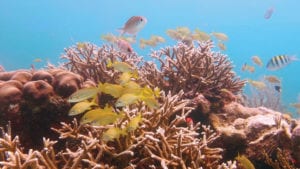 Students in the USF School of Music SYCOM Composition and Electronic Music studio program perform a three-hour continuous concert of original compositions inspired by the Sponge Exchange and FloodZone exhibitions.

This event is free and open to the public.

Dive deeper into the practice of artist and educator Hope Ginsburg as she presents her past and current interdisciplinary projects which explore the sponge as a metaphor for the exchange and ecology of learning and as a catalyst for social change.

This presentation focuses on the sponge culture of Tarpon Springs, known as “The Sponge Capital of the World.” Ginsburg’s work explores the local sponge industry, raises understanding about the health of marine life and its ties to the environment and the economy.

Presented in partnership with the Leepa-Rattner Museum of Art.

The 14th performance in Hope Ginsburg’s Land Dive Team body of work proposes the practice of present moment awareness as a tool for coping with the overwhelming fear associated with climate change.

This new site-specific public performance involves trained participants meditating in full scuba gear and a live musical score that incorporates the breath of the composer.

Together they create an amplified immersive soundscape and opportunity to engage audiences in contemplation of our environment and its species.

Supported by USFCAM Art for Community Engagement (ACE) funders and presented in partnership with The Sponge Exchange, Tarpon Strings Music, and Turn the Tide for Tarpon.

Art for a Warming World:
Sponge Exchange and FloodZone

In 2005, environmentalist Bill McKibben called on artists to turn their urgent attention to climate change.

In “What the Warming World Needs Now Is Art, Sweet Art,” McKibben wrote, “If the scientists are right, we’re living through the biggest thing that’s happened since human civilization emerged… But oddly, though we know about it, we don’t know about it. It hasn’t registered in our gut; it isn’t part of our culture” [his emphasis].

Fifteen years later, a remarkable pair of exhibitions at the USF Contemporary Art Museum (USFCAM) movingly register the workings of the climate crisis — expressing the immediacy, poignancy and personal toll in ways that show us that climate change has since become a most significant and keenly felt part of our culture.

Beautifully curated by Sarah Howard, the exhibitions powerfully render “what is at stake, and what is going to be lost” as a result of the climate crisis, as photographer Anastasia Samoylova expressed during her artist talk at the opening of the exhibition, especially regarding the vulnerable coasts and ocean floors of Florida.

It is fitting that these works be featured at USFCAM during this year of the 50th Anniversary of Earth Day, when artists worldwide will be generating works around themes of climate change. As a reflection of our current urgent cultural moment, this exhibition registers in the gut. For its timeliness, its beauty and its current relevance, it is not to be missed.

FloodZone, an installation of photographs by Anastasia Samoylova, shows the beauty of the Miami landscape and the threat of losing that beauty to flooding from sea level rise.

Like the overflowing waters of a flooded landscape, Gator (2017/2020), installed on the external windows of the building, takes the exhibition to the very exterior of the museum and provides viewers with an experience of symbolically submerging themselves as they enter. The vast shadow of the reptile in green Floridian waters evokes both the danger and the overwhelming approach of the climate crisis at — and spilling over — our doorstep.

Born in Moscow and now based in Miami, Anastasia Samoylova conceived of the FloodZone series of photographs in 2016 and accelerated her commitment to it when Hurricane Irma transformed the landscape around her. Part of a larger project that looks at flood-prone areas throughout the world (now partially collected as a book in a recent publication by Steidl), the images include landscapes, buildings, plants, animals and humans as they are irrevocably and hauntingly bound together.

FloodZone at the USFCAM focuses on the Miami-centered images. These photographs merge the natural with the human-made in the breathtaking beauty of a dream world, simultaneously infused with sorrow and wonder and unmistakably recognizable as the multifaceted soul of Miami in the face of rising seas.

Sponge Exchange, the actively participatory complement to the stillness of Samoylova’s photographs, is an installation of several of Richmond-based multimedia artist Hope Ginsburg’s performative works dealing with the wonder and fragility of marine ecologies.

Ginsburg’s works are the product of careful scientific research and often serve a dual purpose of educating and engaging through art. Ever-interactive, they invite viewers to become a part of the work by participating in its creation. In keeping with their interactivity, they are also often the product of collaborations, most notably with (partner and) composer Joshua Quarles, videographer Matthew Flowers — and more recently, with USF Professor John Byrd and USF students making up the Coastarama Cooperative as part of a semester-long course at USF with Ginsburg in residency.

As viewers enter the Sponge Exchange exhibition, they are greeted by a large replica of a photo opportunity display from the historic Spongeorama sponge factory in Tarpon Springs. Beyond it, the video of Swirling and a collection of dioramas invite further interaction.

Swirling (2019), a four-screen installation featuring video of coral restoration efforts at the Swirling Reef of Death in St. Croix, surrounds the viewer with images of the healthy parts of the reef and the coral nurseries where scuba divers grow, harvest and install coral in the hope of staying the creep of coral bleaching and death that is a hallmark of the climate crisis.

While the process of growing and installing the coral progresses, gentle tonal music mixed with marine sounds reinforces the meditative nature of the process. As a fellow attendee at the show’s opening commented, of all of the works featured in either of the exhibitions, Swirling most provides a modicum of comfort, allowing us to witness the patient heroism of the marine scientists dedicated to the slow, painstaking task of re-growing coral.

Like the hummingbird described by the Nobel peace prize winner and environmental activist Wangari Maathai, which in a folk tale fights a forest fire one beakful of water at a time, the scientists featured in Swirling inspire by their choice to take action in the face of our current crisis.

Maathai created the Green Belt movement in Kenya by encouraging women to plant one tree at a time. The figures in Swirling regrow the reef, one bit of coral at a time. It is by our small actions in the face of overwhelming challenges that we can continue to move forward and collectively, find hope.

Situated behind Swirling in the exhibition, the Coastarama dioramas are educational interactive dioramas collaboratively created by students of the USF Coastarama Cooperative through a creative process modeled after Ginsburg’s — of research, inspiration and performative interaction.

Each of the dioramas focuses on a particular species impacted by the climate crisis — including corals, manatees, lionfish and sea turtles — and shares knowledge about that impact in wonderfully compelling, creative ways. Each one invites viewer collaboration through active interaction.

Finally, artifacts from several of Ginsburg’s fascinating past projects, including a delightful short film of one of the Land Dive series, Land Dive Team: Amphibious James (2018), line the back hallway of the museum and provide a sense of the extent and range of this extraordinary artist’s work.

The Land Dive Team: Amphibious James performance features a live wind ensemble and a group of scuba divers whose breathing serves as partial instrumentation for the music. (The upcoming February 23 performance work, Land Dive Team: Tarpon Springs, will be part of the same series.)

FloodZone and Sponge Exchange complement each other in profound ways. Both render visible a sense of time as a crucial component of climate change — an impression of witnessing natural processes disrupted by unnatural loss. Both reflect the nuanced complexity of the workings of climate change on numerous interrelated beings, human and nonhuman. Both invite the viewer to be present in the midst of the changes — and evoke an emotional investment in past, present and future.

If the story of humanity in relationship to the Earth were written as a traditional play, our current moment would be the climax, where the choice we collectively make — to change our course or to foolhardily continue — determines the outcome of the plot.

In this crucial window of time, scientists tell us, we can — if we act collectively — still prevent the worst harm to ourselves and to the other beings with whom we share this world.

The exhibit at the USF Museum of Contemporary Art poetically expresses both this collective moment in time and poignantly what we in Florida have to lose. It is urgently worth seeing, and seeing again.