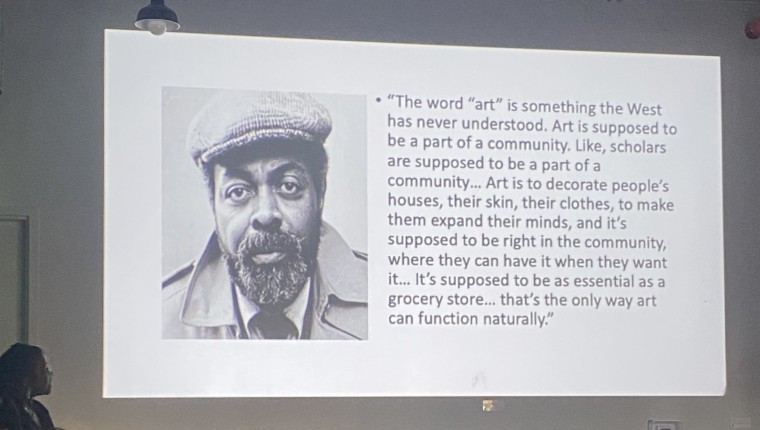 Story and Photos by Jake-ann Jones

. . .
It’s a Tuesday night at The Factory St. Pete and Erica Sutherlin, who is making herstory as the first Black woman director at American Stage, has brought together a panel to discuss Amiri Baraka, the man behind the upcoming play Dutchman.

The evening’s presentation, “Through the Lens: Amiri Baraka, the man behind the words,” is the first in a three-evening series of talks in the free “Beneath the Surface” conversations on the play.

Sutherlin is no stranger to firsts in St. Pete – she was first Black theatre and acting teacher at the Pinellas County Center for the Arts (PCCA) at Gibbs High School, as well as the first Black person to direct a show at the St. Petersburg City Theatre.

Not only is she taking on the role of first Black female director at American Stage, but she’s doing it while taking the audience into the world of Baraka’s incendiary 1964 Obie winning Best Play.

But she’s got a gameplan for doing it.

“It’s 2022 and I’m the first woman of color to grace American Stage. So that just says that we have a lot of work in front of us,” acknowledges Sutherlin. She’s also recently taken on the position of Director of Community Engagement at the theatre, and says she sees the work in front of her as a “unique and beautiful challenge.”

The community talkbacks are part of both her plan for preparing the way for Dutchman’s July 1 opening, as well as bringing the community together to engage in discussion on race in America.

“As a director, I’m excited to introduce Erica, the director to American Stage – they’ve seen Erica, the actor, the performer, but they’ve never had me as the director. So that’s exciting.”
. . .

“The Gorilla, the Ape, the Super-Predator: Black Men in America,” is the final talk, and will be held at The Studio@620 on Tuesday, June 21.

Amiri Baraka was still LeRoi Jones when he wrote Dutchman – and he was in the middle of divorcing his first wife, a Jewish woman named Hettie Jones, formerly Cohen, with whom he had two children, Kellie and Lisa. Both daughters have gone on to become well-respected figures in contemporary art and literature, while their mother Hettie is an acclaimed poet.

But it was the murder of Malcolm X that was most impacted Baraka. Soon after, Baraka left Hettie Jones and moved to Harlem to open the Black Arts Repertory Theatre and School in Harlem in 1965. Out the creation of the theatre the Black Arts Movement was born.

Baraka’s reasons for divorcing Hettie were political – he has said that the conflict of having a white wife during a period when he was becoming more dedicated to Black nationalism and the tenets of Black Power was too great. He later married Black poet and dancer Sylvia Robinson, who became Amina Baraka, and had several children with her, including Newark NJ’s former Mayor Ras Baraka.

The fact that Dutchman is a play focusing on a Black male who is lured into a tragic encounter by a white woman causes one to wonder what kind of emotional duress Jones/Baraka was feeling at the time.
. . . 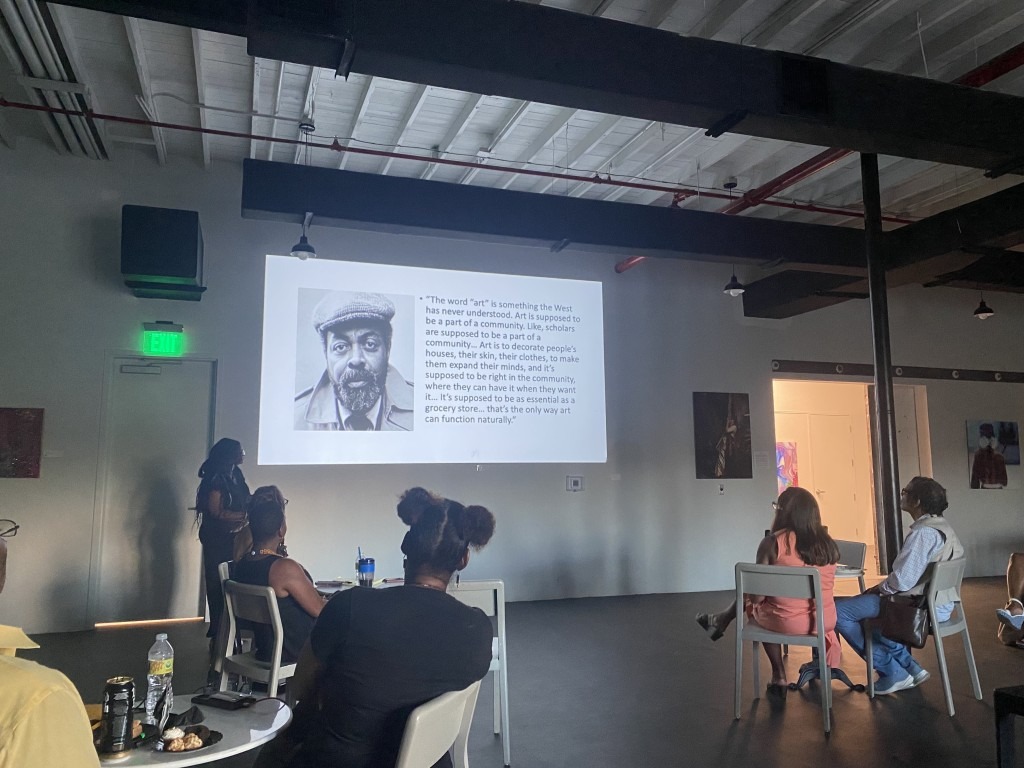 . . .
There are a number of other contemporary issues that make Dutchman a topical if explosive drama for the times. It was only a few months ago that the story of a Black man apparently stabbed to death by his white girlfriend was hitting the headlines – while the number of stories of Black men dying by the hands of white female police (Botham Jean, Daunte Wright) are still floating around our memories.

While the play is loaded with these and other ghosts, Sutherlin notes, “It’s my kind of art. What excites me about this play? – is the journey into the unknown that I get to take with the actors, with the community, with my design team. There are so many emotional shifts happening that as an artist and as a director and as a teacher and as a protector and as a healer, I have to be prepared for, and able to pivot and move with.”

At Tuesday night’s encounter – led by Carrie Y. Hepburn-Brown of the Foundation for a Healthy St. Petersburg, myself from the Weekly Challenger and Stetson Law professor Judith Scully – the audience was shown a Powerpoint presentation about Baraka. The slide show took them from his earliest days in Newark, during which Miles Davis and jazz music were very important influences – to his college days at Rutgers and Howard – to his becoming a steady on the New York poetry scene in the 1950s.

The audience also learned about what drove Baraka to write the play Dutchman, and become founder of the Black Arts Movement, along with other notable Black artists like James Baldwin, Nikki Giovanni and Maya Angelou.

There was also information about his political journey from Black Nationalism to embracing Marxism and turning away from the hardline stance against white racists toward one of joining people internationally to work together to overcome the systemic injustices brought on by capitalism.

The attendees in the mixed race audience enthusiastically took part in the discussion, with some moments of emotionally charged conversation that deepened the engagement.

Dutchman will be in previews June 29-30
and open officially on July 1 at americanstage.org

. . .
Originally published in The Weekly Challenger