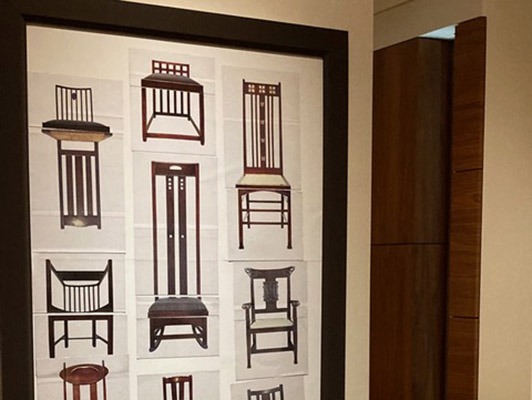 When I say Charles Rennie Mackintosh, what comes to mind? High-backed chairs?

Yes, there are plenty of them included in Designing the New: Charles Rennie Mackintosh and the Glasgow Style, the special exhibit at the Museum of American Arts and Craft Movement in St. Petersburg. But those stark, giraffesque chairs are only a fraction of the unique creations by the Scottish designer who’s name became synonymous with The Modern Style (think Art Nouveau meets Arts and Crafts) developed in the industrial town of Glasgow in the mid-1880s.

“By the age of 31, he had designed tea room interiors, a major newspaper building, a church, a church hall, a public school, a university college, an art school, an art club gallery, private homes, furniture and more,” according to the exhibit’s curators. 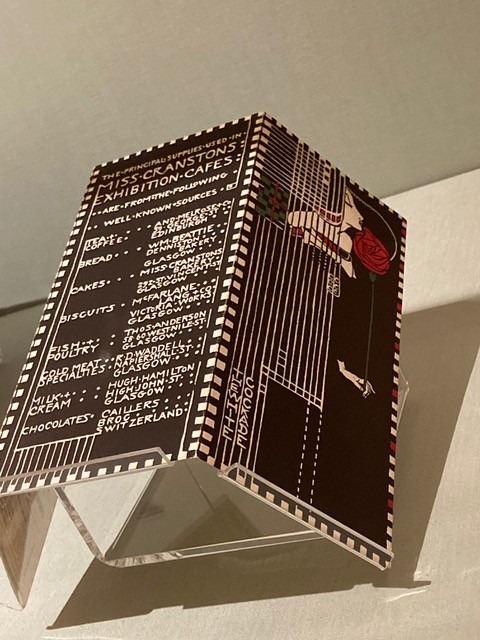 The special show — which closes on June 5 — includes 166 of works of art and design, including watercolor paintings, textiles, floor-to-ceiling posters, ceramics, a toilet cubicle door, even the menu for Miss Cranston’s Ingram Street Tearooms (built in 1907).

But my favorites are the Glasgow-style book covers on display.

“The Importance of Books” – that is the bold headline on the wall in one room of the exhibit. The curators want to emphasize how intricately linked the literary arts and visual arts were in Mackintosh’s time. “In the late 19th century, ideas largely spread through the printed word in books, journals, and magazines. The visual arts were closely tied to the literary ones, as books were often illustrated and publishers used attractive color designs to market their volumes.”

Among the most beautiful books on display at the MAACM special exhibit are the ones designed by Talwin Morris, the art director of the Glasgow-based Blackie & Son. Influenced by his friendship with Mackintosh and “The Four” who helped define the Glasgow Style, Morris designed dozens of covers for Blackie and other publishing houses, breaking away from the humdrum narrative style commonly used on books in the Victorian era and moving to the more modern Art Nouveau emphasis on lines, curves and repeating motifs.

“The Four” was a quartet of designers and painters who had met at the Glasgow School of Art – Mackintosh, his wife Margaret MacDonald, Herbert MacNair and his wife Frances MacDonald (Margaret’s sister). In this exhibit, there are stunning examples of all of their work. Morris, whose wife Alice was a children’s books illustrator, became regarded as the fifth member of “The Four.”

It was Morris, in fact, who linked Mackintosh forever with the publishing world. In 1902 at Morris’ suggestion, Walter Blackie, the founder of Blackie & Son, hired Mackintosh to design his home in Helensburgh, west of Glasgow. Mackintosh, with the help of his wife Margaret, designed most of the house’s interior and furniture as well, even prescribing the color of the cut flowers on the living room table. The private home, known as Hill House, is considered Mackintosh’s finest accomplishment.
. . .

. . .
After Morris’ death (Mackintosh designed his tombstone at the behest of his widow), Blackie invited Mackintosh to design his own book covers for the publishing house. He is said to have designed three covers, including one for The Saucy May by Henry Firth (c. 1921).
. . .

. . .
A copy of The Saucy May is currently offered at Etsy for $39.30. It certainly is one of the more economical ways to own a Mackintosh design. In 2002 one of the original high-backed chairs Mackintosh designed for the Argyle tearooms in Glasgow sold at auction for more than $450,000.
. . .

. . .
Or you can stop in at Designing the New, try your hand at stenciling – an art form used extensively by Macintosh to decorate walls with his bold, graphic design ideas – and design your own book cover.
. . .