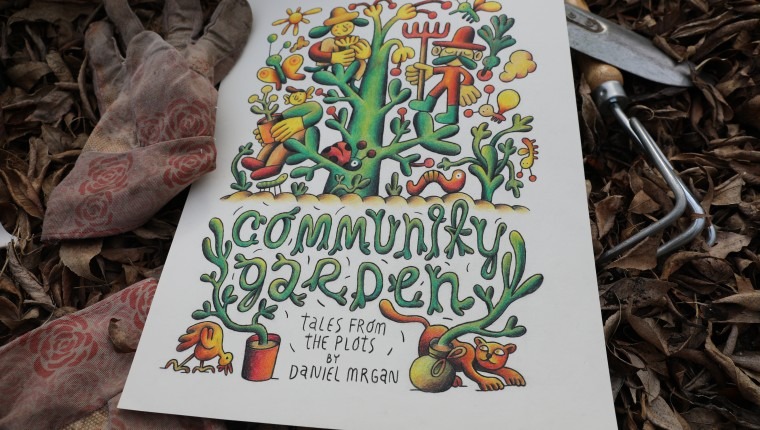 . . .
A few springs ago, I started going to a neighborhood coffeeshop across the street from a lively community garden. I would take the window seat with a full view of the garden, usually with a book or a sketchbook in front of me.

At the time, I knew close to nothing about growing plants of any kind, and over the months that followed, I became enchanted by this tiny plot of land and especially the community of gardeners around it.

As the pages of my sketchbook filled up with doodles of fantastical fruits and flowers, I also started writing short whimsical notes about the people I was seeing at the garden. A narrative component has always been a significant element of my art, so notes and mini stories are a pretty common part of my process.
. . .

As with most things sketchbook, the intent was mainly to entertain myself while recording my observations and exploring different ways of drawing and looking. I found myself, as my grandma would say, making up stories about the people I was seeing, and I was loving every caffeinated minute of it.

But then it all came to an end – I moved away and left the coffeeshop and its front-row view of the garden behind. The drawings and stories stopped, but I felt as though a seed of some kind had been planted in those sketchbook pages and that it was only a matter of time before it would sprout and transform itself into something bigger.
. . . . . .
Fast-forward a couple of springs later to a worldwide pandemic and the very likely prospect of a long summer of lockdowns and isolation. Looking for ways to avoid dreaded cabin fever – and inspired by green-thumbed friends and our community’s strong gardening culture – my partner and I decided to get a small plot at a local community garden. We didn’t know the first thing about gardening, but we were willing to get our over-sanitized hands dirty and dive in headfirst.

As our seedlings started to grow and we got to know some of our garden neighbors, those old drawings of plants and gardeners came alive again in my mind. Now being at the garden every day, I started noticing little details and differences about other people’s gardens – many big sunflowers in this one, nothing but cabbages in that one, an impressive variety of corn here, gorgeous flowers there. I was once again under the spell of garden magic and I had so many questions.
. . . . . .
The drawings in this exhibit are my attempt at answering those questions. I suppose I could have asked my fellow gardeners for some answers, but where’s the fun in that? I’d rather make up some stories. Thank you for looking.
. . .

Daniel Mrgan, a Missoula, Montana-based graphic designer and illustrator, was born and raised in Croatia. He came to Montana by way of the swamps and rivers of Florida.

He’s been attempting art most of his life and feels lucky to say that his drawings, woodburnings and mixed media art have been exhibited at many galleries and art events.

Daniel likes to take big spoonfuls of inspiration from a rich stew of films, music, comics, cartoons, Eastern European stop-motion animation, nature, dreams, reading and the work of other more talented artists. When not doodling, he enjoys riding his bicycle, cooking, watching movies, making spoons, and camping in the woods.