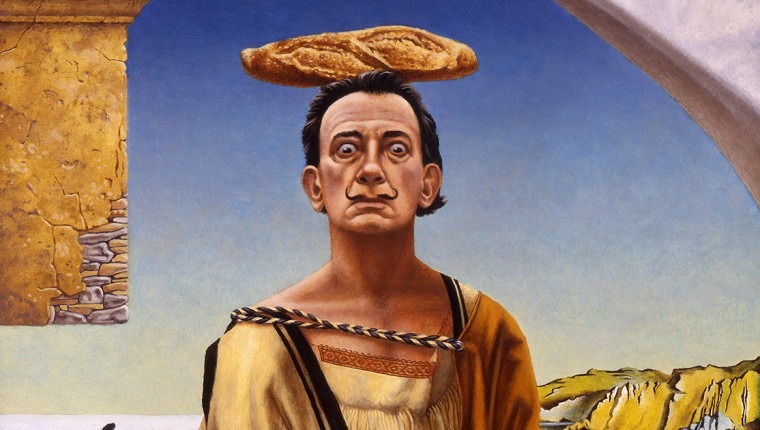 . . .
In 1943 A. Reynolds and Eleanor Morse, a recently married young couple from Ohio, had the foresight and means to purchase a very strange painting from a rising art star named Salvador Dalí.
. . .

. . .
Over the next four decades their obsession with the artist grew steadily. Eventually, the high number of Dalí works in their possession became unwieldy and they searched for a venue to share Dalí’s greatness with the world.

Luckily for St Petersburg, the Morse’s collection landed here in 1982 and this year The Dalí Museum celebrates its 40th Anniversary.
. . . Daddy Longlegs of the Evening-Hope! by Salvador Dalí, 1940

. . .
The first Dalí painting that the Morse’s purchased in 1943 was his now-iconic Daddy Longlegs of the Evening–Hope! It’s the first painting visitors see when entering the museum’s permanent collection.

One has to wonder what it was about this phantasmagoric image that so attracted a seemingly straight-laced Midwestern couple. What ensued was a lifelong friendship with Salvador Dalí and his wife Gala. The Morses’ devoted patronage resulted in the acquisition of about 2,100 works by the artist before his death in 1989. St Petersburg is incredibly fortunate to have this collection.
. . . . . .
My own 38-year artistic career owes a huge debt to Dalí’s inspiration. After moving to St Petersburg in 2010, the first thing I did was become a docent at the museum. This allowed me not only to be in constant contact with Dalí’s creative world, but to deepen my understanding of the man and artist through the museum’s training and educational programs. It’s been a great pleasure to share that knowledge with curious visitors through public and private tours.

It’s not hard to see Dalí’s influence on the many other artists who make Tampa Bay their home. Simply tour the hundreds of murals adorning the streets of St Pete and the thread of surrealism that runs through many of them is readily apparent.
. . .

. . .
It’s not just artists who fall under the influence of Dalí and the museum – the entire community and beyond, benefit. Academically, it’s safe to say that this museum has become a worldwide resource for scholars of Dalí and Surrealism.
. . .

. . .
In a recent YouTube presentation Shaina Buckles-Harkness, Dalí Museum Librarian and Registrar, detailed the wealth of programs and outreach now offered by the museum including but not limited to –
. . .

. . .
As a tourist attraction, about 400,000 visitors are drawn to the city annually because of the museum’s far-reaching reputation. According to their own statistics “The Dalí provides an overall economic impact to the greater St. Petersburg/Clearwater area of more than $161 Million and prompts direct spending in our community of more than $80 Million each year.”
. . .

. . .
Dalí’s artwork isn’t the only thing that draws attention to the area. The museum’s strikingly original architecture also garners high praise. Designed by St Pete’s own Yann Weymouth and the firm HOK, the building is consistently listed as a must-see on travel websites. According to HOK “The American Institute of Architects included the building on its list of Florida’s greatest architecture of the past 100 years, and Flavorwire ranked it among the ‘20 Most Beautiful Museums in the World.’”
. . .

You can read a detailed interview with Yann Weymouth in Inhabit
magazine, on the Dalí’s artistic and sustainable design

. . .
Dalí once said, “At the age of six I wanted to be a cook. At seven I wanted to be Napoleon. And my ambition has been growing steadily ever since.”

That statement seems to have held true even in death. Dalí’s visionary legacy didn’t die with him. His positive influence keeps spreading and much of the credit goes to St Petersburg’s Dalí Museum.

I think he would have been proud.

Congratulations to the Dalí Museum. Here’s to another 40 years!
. . .