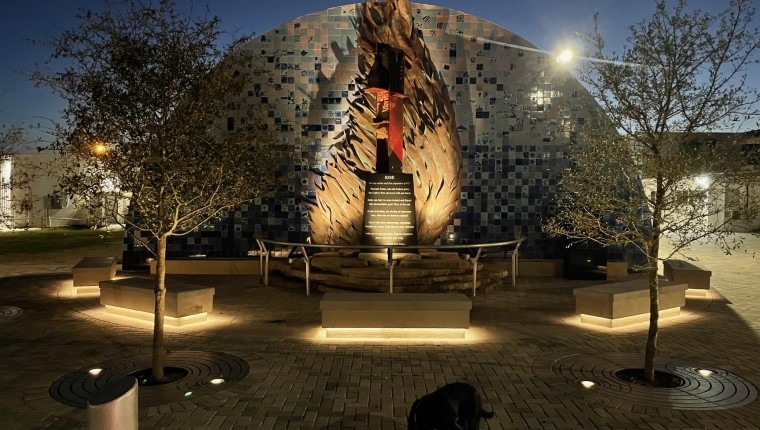 On this Memorial Day weekend, Mark and Helen share their thoughts, and all the work behind Rise.
. . . 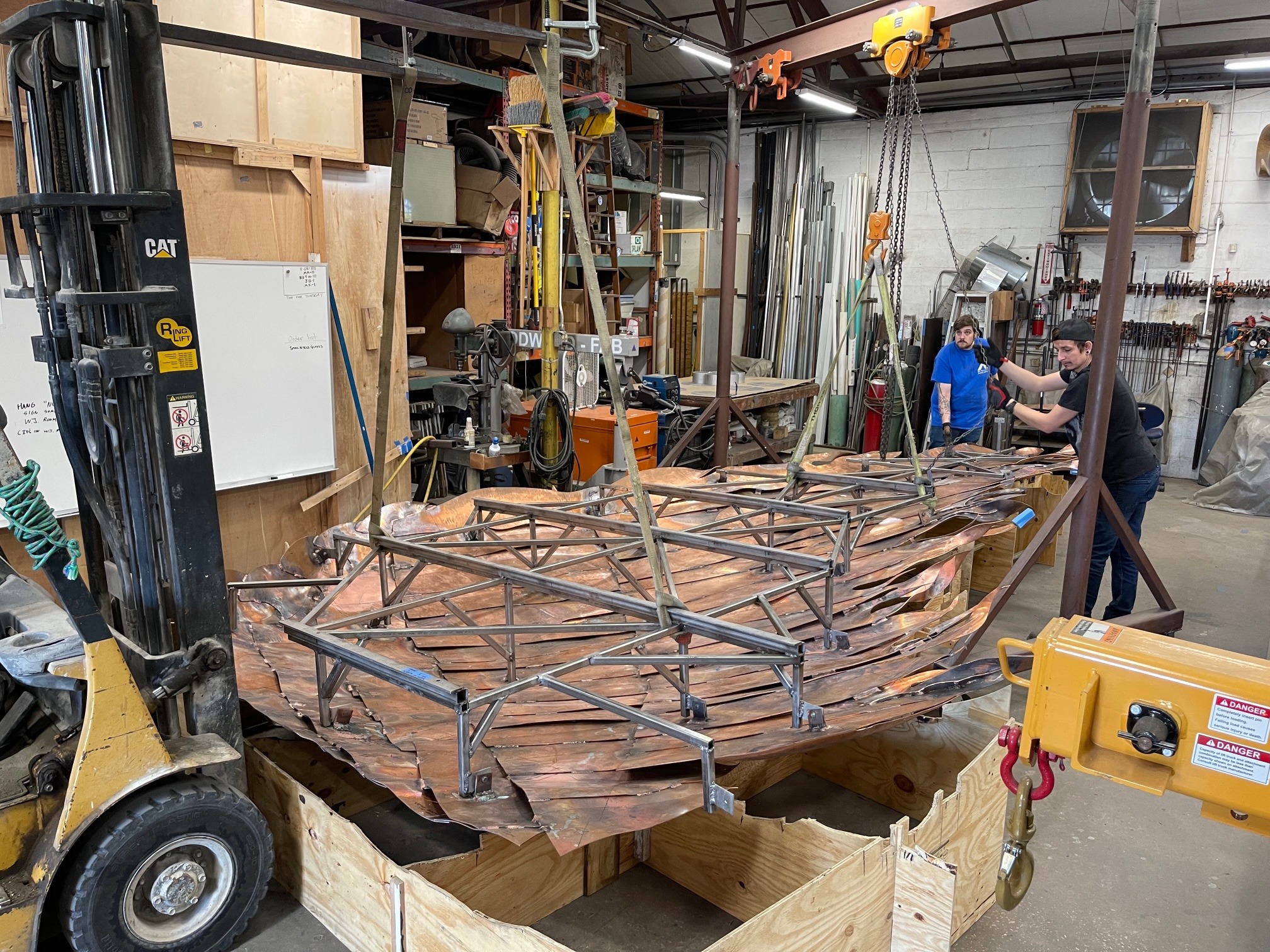 . . .
“The folks from American Freedom Distillery reached out to me to create a monument to first responders and all those impacted by the events of 9/11. They had already created a memorial to honor those lost on that day and in the conflict that followed in Afghanistan, that was placed at ground zero in New York.

“In the process of moving that sculpture called the Horse Soldier Memorial from its temporary location on the Twin Towers site to its permanent home by the museum, a piece of Tower 1 was unearthed – and it turned out to be the last piece of that tower removed from the site.

“This became the centerpiece of Rise. In my initial conversations with AFD, they talked about wanting the Monument to look forward and focus on how the community recovers and heals from an event like this.

“It was at this point that the idea of the Phoenix wing came to mind. Rising from the ashes – rebirth became the primary theme for the monument.”
. . . 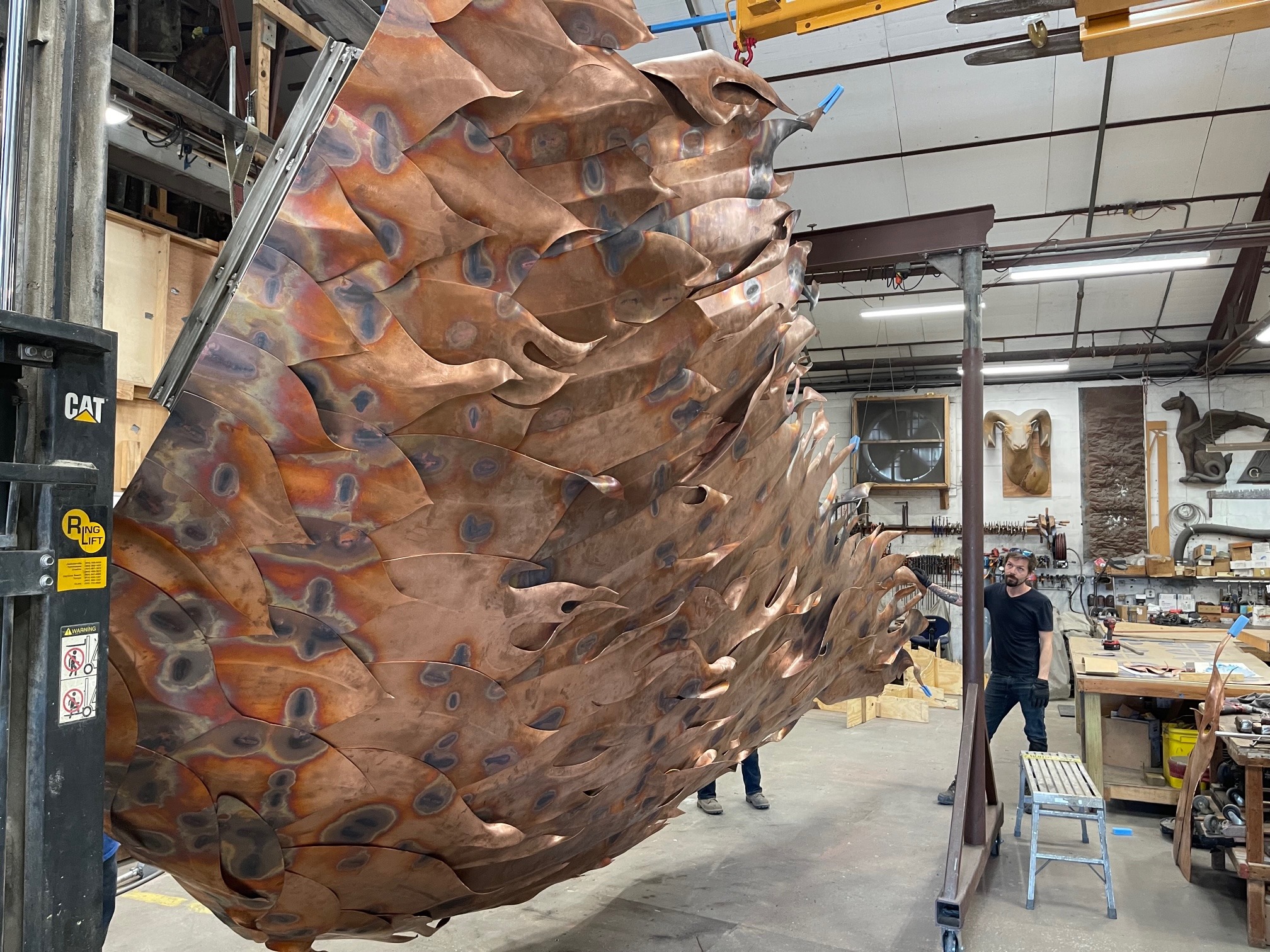 . . .
“It is reiterated in the arched wall that is the backing of the monument. It’s a nod to the previous architecture that sat in that place on the ArtsXchange campus where there was a quonset hut structure – but more than that, it symbolizes a rising sun, the dawn of a new day.

“The arched wall is clad with hand-painted tile created through multiple community events to give people a physical connection to the monument. The piece of steel I-beam from Tower 1 sits atop a black granite pylon that has Helen’s poem etched into it. The granite pylon is rising up through a broken pile of limestone meant to represent the destruction of that day.”
. . . 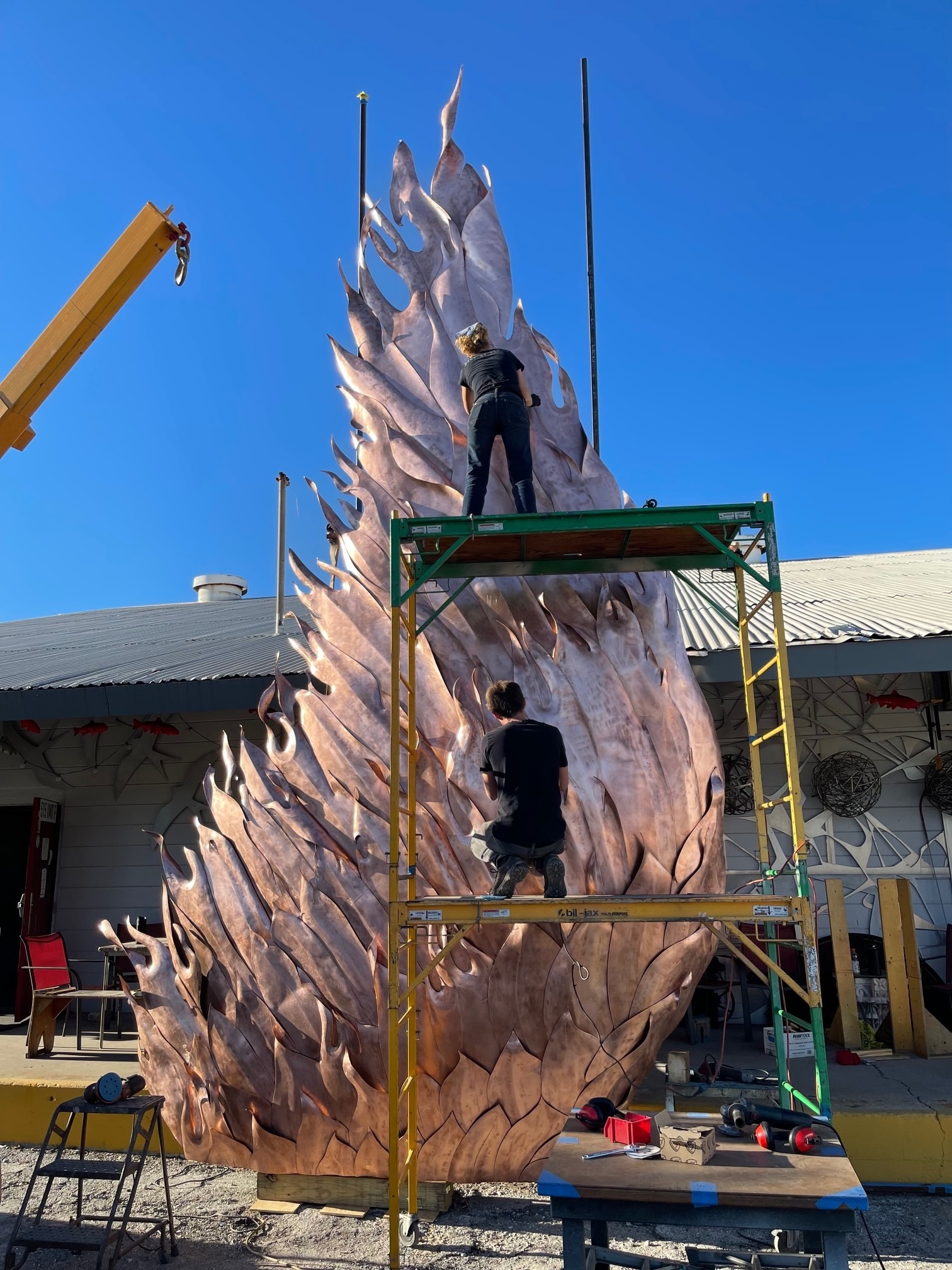 . . .
“Working with Helen was a wonderful process as we shared the creative challenges associated with using our artistic mediums to express such an intense and significant experience, particularly in this politically polarized world that we find ourselves.

“We tried to hold on to hope as an inspirational guide through these challenges. After all, 9/11 is a shared experience by all Americans. We are bound together by this common thread.”
. . . 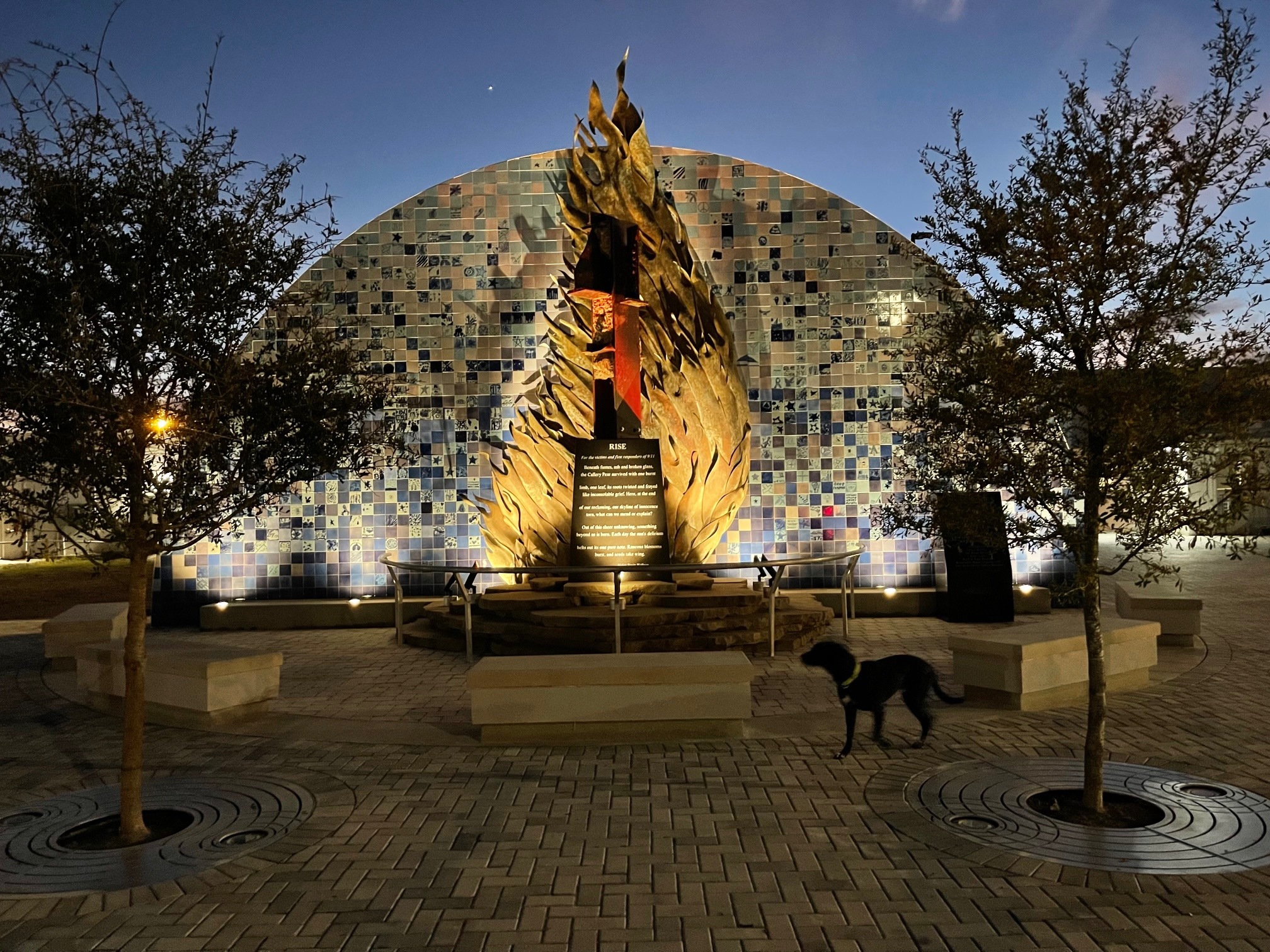 . . .
“Collaborating with Mark Aeling by writing a poem for the Rise Monument was both an honor and a challenge, and I’m grateful to Mark and American Freedom Distillery for asking me to be part of it.

“I had written two previous poems about 9/11 that were published in my book, Shimming the Glass House, but neither of them was appropriate for this project. The monument is meant to honor the first responders and victims of 9/11 – to be about resilience – how we as a nation have moved forward and come together since that terrible event.

“But writing a poem about strength and unity, especially during this particularly divisive and pandemic climate, required a deep dive. I had to ask myself the question, ‘Are we truly stronger now as a nation?’ Writing poems about resilience in the midst of so much loss is both difficult and necessary.

“As I typically do, I turned to the natural world for a way into the conundrum of this task. Like many, I mistrust didactic poems (who am I to tell you how to feel?), so I relied on the help of several poet friends (you know who you are—thank you!) who acted as readers and sounding boards of several early drafts.”
. . .

. . .
“The final draft of the poem leans into the metaphor of the Callery Pear tree – or The Survivor Tree, as it’s sometimes known — a tree found buried in the rubble of 9/11. Years later, nursed back to health and replanted on site, the tree now flourishes with a profusion of annual white blossoms.

“As symbols of strength and support, saplings from the tree are given by New York school children each year to other communities who’ve suffered their own traumatic events. Unfortunately, like Uvalde this past week, recipients for this kindness are far too easy to come by.

“After zeroing in on the Callery Tree as the metaphor for resilience in the poem, I tweaked images and lines to better reflect Mark’s terrific wing sculpture of the Phoenix rising from the ashes. It felt important for the poem to be in dialogue with Mark’s visual work, but in poems, beyond image and metaphor, sound is crucial.”

Beneath fumes, ash and broken glass,
the Callery Pear survived with one burnt

limb, one leaf, its roots twisted and frayed
like inconsolable grief. Here, at the end

of our reckoning, our skyline of innocence
torn, what can we mend or explain?

Out of this sheer unknowing, something
beyond us is born. Each day the sun’s delirium

belts out its one pure note. Raucous blossoms
burst, and seeds take wing.
. . .

“As usual, I read the poem aloud through the drafting process tweaking the sounds of the language and manipulating line breaks to suggest the emotions of the poem – grief, dismay, and yes, a determined hope that eventually followed that event.

“So while this poem, etched into the base of the Rise Monument, admits still the horror and bewilderedness of 9/11, I mean for the poem as a whole to be a political statement. Focusing on the power and tenacity of the natural world is a choice that shows us the possibility of moving beyond loss.

“It’s no small thing how a charred leaf becomes again a tree, but thanks to the brave men and women who responded that day, how lucky we are to witness it.
. . . 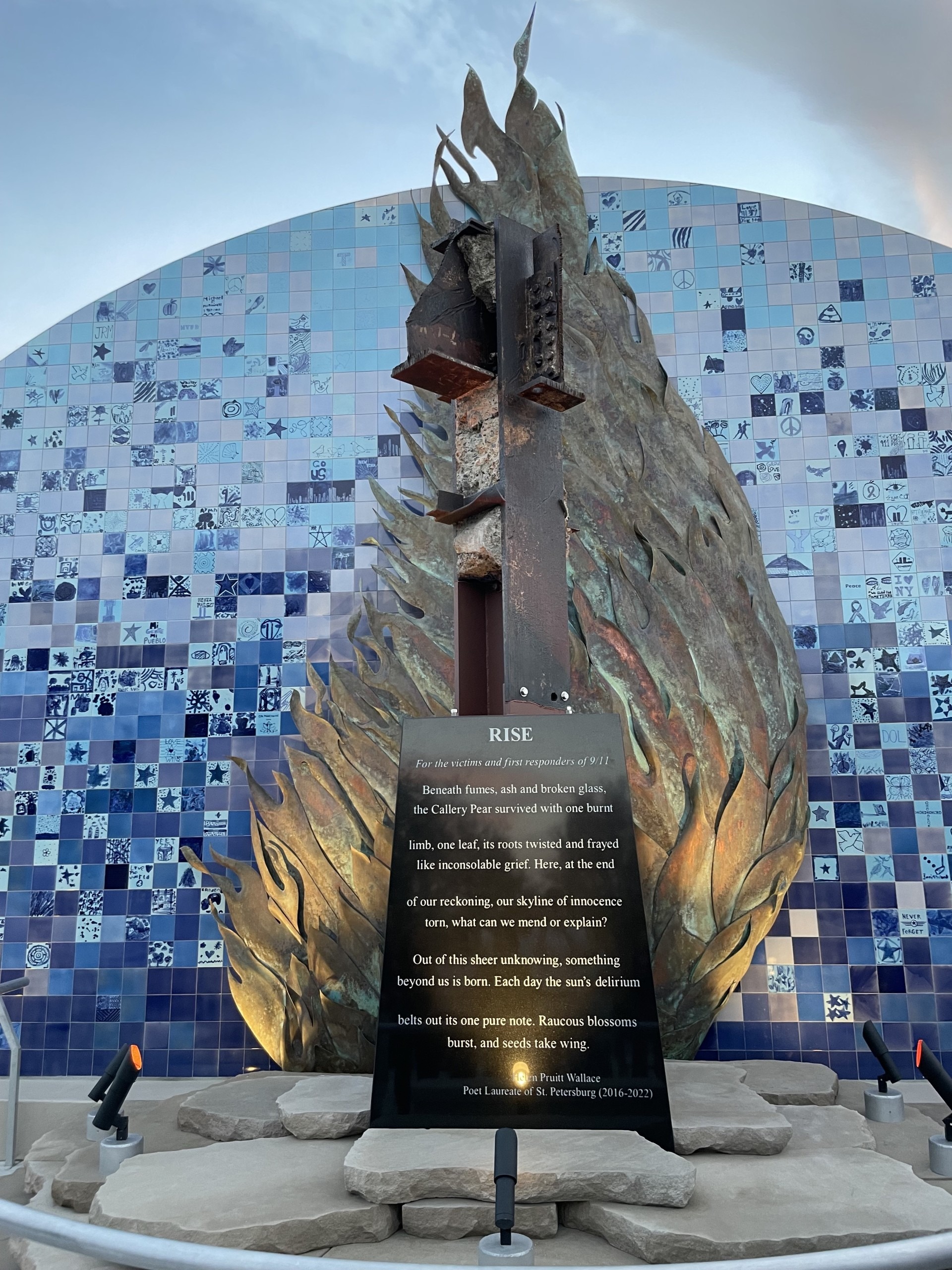