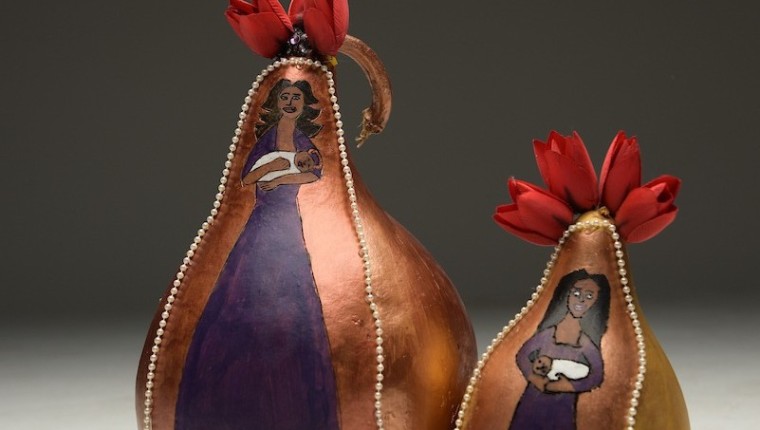 By Robyn Crosa and Christina Marko
. . .

. . .
Visual artist Robyn Crosa has a solo exhibition, Gourdgeous Goddess Gals, on display at Gallery 120 at the Largo Public Library. Robyn’s art work has previously been displayed at the Salvador Dalí Museum Holiday Art Show, and the Carrollwood Cultural Center in Tampa.

Robyn first became enchanted by gourds when she was in a small town country store in Georgia where a basket of gourds were sitting out for sale. “When I looked at the basket of gourds, it looked like my mother and my sisters and I sitting together, and so I decided to take them home and paint them. I painted an abstract design on them and ended up giving them to my mother as a Christmas gift and they were supposed to represent myself, my mother and my sisters.

“I was just really drawn to gourds and their natural feminine shape. My mother had a friend who was an artist who had done a little bit of gourd art, and so she came over and showed me how to use a wood burner on the gourds. So then I started burning faces and images of women onto the gourds and I started painting them and gluing little beads on them. I just became fascinated with gourds.”
. . . 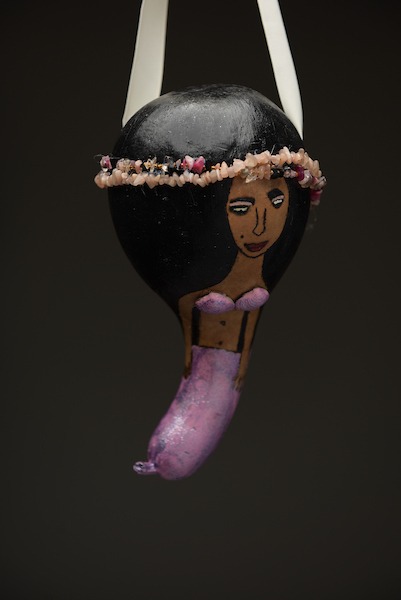 . . .
To continue working with gourds, Robyn found a local farmer who sold her 100 gourds for $100 and she painted them all. Over time, she discovered the American Gourd Society which consists of a national group of people who either grow gourds or create gourd art, and each US state has its own Gourd Society.

Local communities of gourd enthusiasts organize in clubs, referred to as “patches.” For example, in Atlanta, there is the “Hotlanta Patch.” Here in Florida there are “patches” in Seminole, Brevard and Marion counties and beyond. Robyn learned additional gourd art techniques at local Georgia patch gatherings from other gourd artists who made all kinds of things out of gourds, including musical instruments, bird houses and dolls.

Robyn Crosa was born in Miami to immigrant families from Lebanon and Cuba. Her early childhood was spent in the Tampa Bay area, later relocating to the greater Atlanta area where she grew up and established herself. After taking a life changing trip to visit her relatives in Cuba, she realized that her family was the most important thing in the world to her. Recently, she decided to move back to Florida to be closer to family and currently resides in St. Petersburg. She received an Emerging Artist Grant at the Florida CraftArt Festival in 2020.
. . . 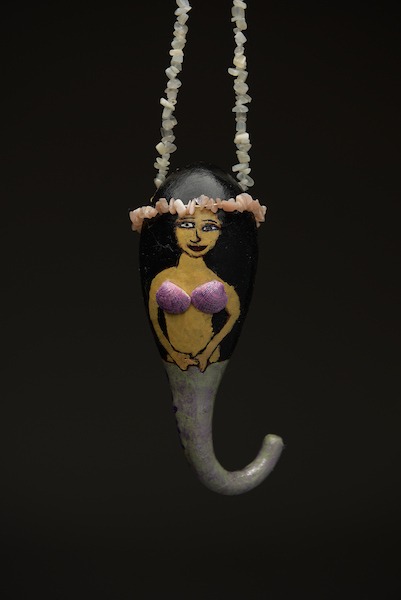 . . .
Robyn applied for Creative Pinellas 2022 Pinellas Recovers Individual Artist Grant after being invited to do a solo exhibit of her Gourdgeous Goddess Gals collection at the Largo Public Library. She explains, “I wasn’t exactly sure how I was going to pull off the exhibit because it’s expensive to get all the materials that I would need and so I decided to apply for a grant to see if the grant would sponsor the exhibit that I had been invited to do. . . and they approved my grant.” She also recently received a St. Petersburg Arts Alliance Individual Artist Grant to support the exhibit.

She says, “I want to invite people from these communities to come to the exhibit and to come to the July 3 Artist Talk and participate in art – it is for everyone, but it’s especially for people who feel marginalized or who are underrepresented.”
. . .