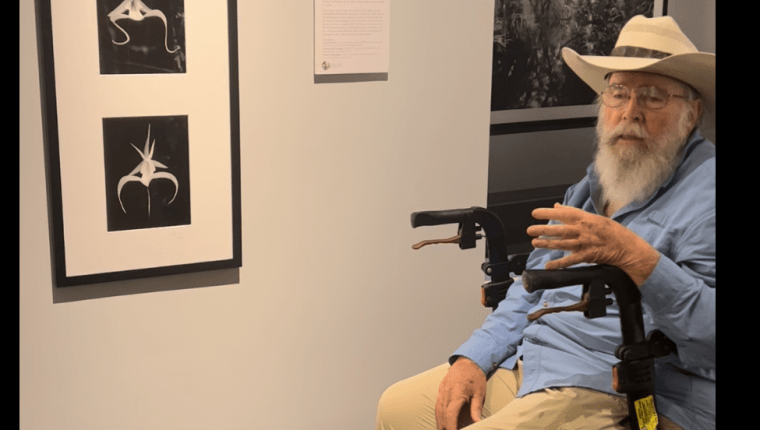 . . .
The Clearwater Community Redevelopment Agency scored a grand moment for Clearwater’s Main Library with the opening of America’s Everglades Through the Lens of Clyde Butcher, an exceptional photographic art exhibit by the world-renowned Florida Artists Hall of Fame photographer.

Butcher’s landscape photography is revered among photographers, nature lovers and art historians for its idyllic frame of time and place on this Earth.

Existing spaces were redesigned within the main library to present this museum-quality exhibit with easy access on the first floor. The library’s waterfront location on the bluff has prompted its place in the Imagine Clearwater redesign and development downtown.

According to Amanda Thompson, Clearwater Community Redevelopment Agency Director, “Why art and why an Everglades exhibit? Our community is defined by our public spaces. We believe when you bring high quality art where you live it’s transformational.

“We want to invite people to come for free and see this fine photography. Art is a critical part of the downtown transformation.”
. . .

. . .
The Everglades National Park will celebrate its 75th anniversary in late 2022. These large format photographs share the depth and breadth of the Florida ecosystem, encouraging respect for its value. It is part of Butcher’s nature to support environmental groups and conservation efforts by state agencies. Preservation of Florida parks is vital so future generations may explore its wildness.

As Butcher says, “I think that it’s important, hopefully, to bring kids here and schools. A lot of people don’t know where their oxygen comes from. It’s the beauty of Florida.

“When I started working on the Everglades restoration, I would take politicians into the swamp – all they’ve seen is the road, until you put your feet in it. The water is crystal clear in Big Cypress. There are a few alligators making a deposit here and there, though.”
. . .

. . .
I met Clyde and Niki Butcher back in the 1980s at an outdoor Dunedin Art Harvest Festival. We spoke briefly about the camera he used to photograph such stunning images and sharp detail. He explained how he used a full frame camera, tripod and waited for the light to be just right. Niki, his photographer wife, assisted him on these journeys into the wilds of the Big Cypress Swamp in the Everglades and other captivating areas in Florida.

The black-and-white images, often sized to large 5 feet by 9 feet images, meld the stark edges and subtle nuances of landscapes, capturing unbroken moments of nature. For many years, Butcher carried 120-pounds of camera gear as he hiked in difficult terrain and stood in chest-deep water for hours. His large format cameras range in size from 5” x 7” to 12” x 20”.

He currently uses a Cambo Actus with a digital 36 megapixel Sony A7R camera and RZ Mamiya lenses, equipped for black and white. The silver gelatin, platinum palladium and digital photographs show the splendor of the Everglades.

The popular Moonrise photograph is in the first room. This is one of the first pictures he took after his son Ted was killed in an auto accident. After this tragedy, the Butcher family moved from California to Florida, towing their sailboat and launching it in St. Petersburg. He put aside color photography and turned his passion to black and white.

“I wanted to get the feeling of Florida and started photographing what I wanted to, and apparently people liked my work,” says Butcher.
. . .

. . .
In 2017, he had a stroke, met the challenges and changed his life. He recommends that people with health problems, such as a stroke or other concerns, need to get outdoors and do things. Nature helps you heal.

“I just shot Sunken Gardens in St. Petersburg last Sunday. I’m photographing more than before I had my stroke,” adds Butcher.

Visitors to the Clearwater Library will enjoy stunning large format photography depicting tropical trees filled with bromeliads, orchids and reptiles in the ecosystem. Subjects range from cigar orchid ponds to expansive views of resurrection ferns in swamp forests, as well as sandy islands on silvery water with magnificent cloudscapes overhead.

As Butcher says, “I follow the light and let nature present itself.”

Most people who photograph the Everglades take photos of birds and alligators. He prefers wide angle to reveal the primeval essence of the river of grass. The scenic Cigar Orchid Pond photograph is one of his favorites.

Butcher explains, “January 1, 2000 we took the family to the swamp. We had the wrong light but the composition was there. I went back to this spot every year for 9 years until I got the right shot. Everything was right, the light, the resurrection fern, the bromeliads, the water, the background. You can’t have wind blowing since it’s a two minute exposure. It’s a 2-hour swamp walk. True men don’t use compasses or GPS. I do have a compass in my backpack. I think I used it once.”
. . .
. . .

. . .
. . .
Another unique photograph is the Ghost Orchid Triptych. Butcher shot the same orchid at dawn from 1999-2001 to document this rare plant. All was well until the water moccasin bit his heel in his Birkenstock sandals. His friend Oscar Thompson doubted him until he saw his heel. Butcher said it must have been a dry bite. He decided he felt okay, continued to the orchid and took the photograph.
. . .

The Butcher’s home and the Big Cypress Gallery was previously an orchid and bromeliad nursery, encompassing 13 acres of land within the Big Cypress National Preserve. Butcher’s purchase required special permission which was granted after the superintendent met the couple and understood their gallery vision.

Clyde and Niki’s daughter Jackie also felt the pull of the Everglades and southwest Florida. Since 2000, Jackie and her husband Neal Obendorf have been involved in leadership roles at Butcher’s Venice and Big Cypress Galleries. Their children, Robert and Kayla also play a part in the business. Kayla graduated from the Academy of Art University in San Francisco in the field of photography and has joined the business. Robert will soon be in college majoring in Computer Engineering and assists with technical issues. Kayla and Robert also weigh in on the latest social media strategies. The family feels blessed to work with each other along with expert staff members for gallery operations and swamp walks.

For an Everglades experience all year round, you can book a swamp walk and stay overnight at the one-bedroom Swamp Bungalow or the two-bedroom Swamp Cottage. The accommodations sit on lush subtropical acres of Big Cypress Swamp, surrounded by a million acres of wilderness. Make a reservation in advance for a guided swamp walk and eco-tour or private photography swamp tour.
. . .

. . .
According to Butcher, “Summertime is the prettiest time. October to April is busy. May is not good in the swamp as it’s mating season for gators and snakes.”

Treat yourself to this exhibit. It is a breath of Florida’s fresh air magnificence, reminding us of the importance of land conservation. There is one Everglades, a true wonder of this planet.

If you are unable to attend but want to experience Butcher’s wondrous photography, The Everglades book is available for purchase. The large book contains photographs from 1986-2019, biological explanations, the healing waters home story, and historical moments with Marjory Stoneman Douglas, dignitaries such as a President and Vice-President, and ancient orchid adventures. Butcher’s extraordinary photographic legacy is an impressive gift for all Floridians.
. . .

The America’s Everglades Through the Lens of Clyde Butcher exhibit
will be on display through May 31, 2022, during open library hours.
The exhibit and library parking are free.
Clearwater Main Library
100 N Osceola Ave
Clearwater FL 33755

The Venice Gallery and Studio houses Butcher’s 2200-square-foot darkroom.
You can find details about his process here.
. . .