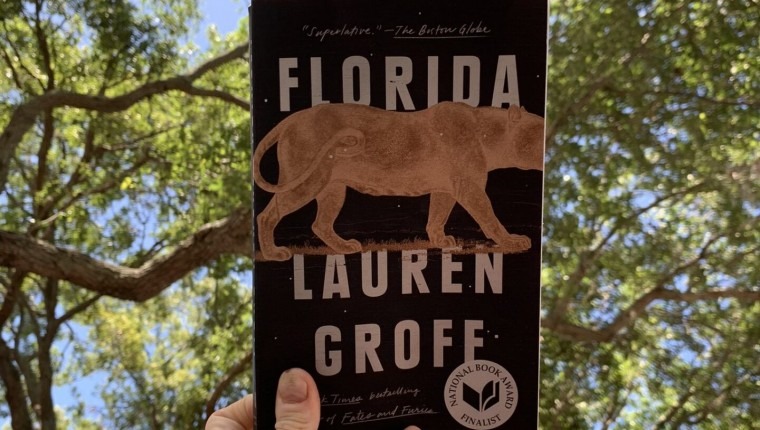 I had the privilege and pleasure earlier this week of moderating a discussion of Lauren Groff’s incredible short story collection Florida, with writer and editor John Freeman, and Erica Hall, Executive Vice Chair of the Suncoast Sierra Club. The talk was co-presented by XR Writers Rebel and the Brooklyn Public Library, as well as Orion Magazine. We talked about the unique capabilities of fiction to address issues of climate change, how crucial an intersectional approach is to climate justice, and why Florida is the “canary in the coal mine” for climate change.

Here is the original event description…

Co-presented this month with Orion Magazine, and with Writers Rebel NYC, Climate Reads returns in May to discuss Florida, by Lauren Groff. This Climate Reads will be moderated by Sarah Gerard. It will include editor John Freeman and Executive Committee Vice Chair of the Suncoast Sierra Club, Erica Hall.

In her vigorous and moving new book, Lauren Groff brings her electric storytelling and intelligence to a world in which storms, snakes, and sinkholes lurk at the edges of everyday life, but the greater threats and mysteries are of a human, emotional, and psychological nature. Among those navigating it all are a resourceful pair of abandoned sisters; a lonely boy, grown up; a restless, childless couple; a searching, homeless woman; and an unforgettable, recurring character – a steely and conflicted wife and mother.

The stories in this collection span characters, towns, decades, even centuries, but Florida—its landscape, climate, history, and state of mind—becomes its gravitational center: an energy, a mood, as much as a place of residence. Groff transports the reader, then jolts us alert with a crackle of wit, a wave of sadness, a flash of cruelty, as she writes about loneliness, rage, family, and the passage of time. With shocking accuracy and effect, she pinpoints the moments and decisions and connections behind human pleasure and pain, hope and despair, love and fury—the moments that make us alive. Startling, precise, and affecting, Florida is a magnificent achievement.

John Freeman is the founder of the literary annual Freeman‘s and the author and editor of ten books, including Dictionary of the Undoing, The Park, Tales of Two Planets, The Penguin Book of the Modern American Short Story, and, with Tracy K. Smith, There’s a Revolution Outside My Love. His work has appeared in The New Yorker, The Paris Review and Orion, and been translated into over twenty languages. The former editor of Granta, he lives in New York City, where he teaches writing at NYU and is executive editor at Alfred A. Knopf.

Erica previously chaired a DC non-profit, Healthy Solutions, that worked with Community Supporting Agriculture (CSAs), Community Gardens, Brownfield Remediation, food insecurity, and urban agriculture. Erica previously served on the Board of Directors of Groundwork Anacostia River DC, a local non-profit that utilizes environmental restoration goals as a vehicle for community development. Erica is also a Senior Fellow of the Environmental Leadership Program, a dynamic network of 900 of the country’s top emerging environmental and social change leaders. Erica was also selected as co-chair of the Host Committee for Greenbuild, the world’s largest conference and expo dedicated to Green Building. As co-chair, she worked to connect and introduce the U.S. Green Building Council and Greenbuild to International Real Estate Management (IREM) and other real estate groups. The 2015 Greenbuild Host Committee, on which Erica served, has earned the President’s Volunteer Service Award in 2016. She has participated in developing Food Policy Councils in NY, DC, VA, and MD and has been very active in the green building and environmental justice community in the DC area, using her platform to combine leadership and activism. Currently living in St. Petersburg, FL, Erica stays busy on several projects, including advising and working with the St. Petersburg League of Women Voters and the City of St. Petersburg on the development of a Food Policy Council for the City of St. Petersburg. Erica previously served as a workgroup member of the Grow Smarter Strategy, a comprehensive, integrated, data-driven community plan to enhance St. Petersburg’s competitive position and provide quality, diverse economic growth. As a member of the Ad Hoc Committee of the Enoch Davis/St. Pete Youth Farm, Erica helped to define the mission statement for the project, helped guide project direction, while producing some broad actions needed to implement the project.