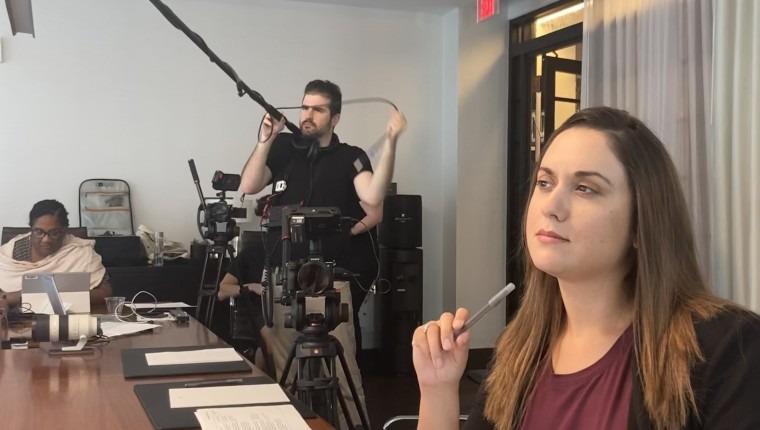 Another WONDERFUL opportunity in the books!

I was recently hired to participate in a corporate training series for JW Marriot! E-Training projects, like this one, are a great way to play a standard character, like a board member, sales leader, manager, etc. It’s very much a character study that pays handsomely for shoot time. Additionally, these projects help companies “train” their employees by offering them real scenarios in a contained setting, with actors. This specific series was produced to emphasize employee interaction and boardroom report. This was very similar to the UF Literacy Learning series I completed a few weeks ago. I’d like to walk you through my prep, as well as what it was like to be on set. I’ve included some pictures from this weekend!

So, when an actor gets hired for something like this, and the contract is signed, they’re sent a series of scenarios. For this project, I played a sales leader named Carmen and I was trying to convince the other team members of the potential financial gains for offering a certain hotel block. The director wanted us to focus on our body language, as it would show the trainees how to act in those situations. That was the fun part!

Since this is a VERY specific project, I try to memorize the text as soon as possible. For something like this, as actors, we need to cater to what the client wants, not what WE want to portray. I try to adhere to the script as acutely as I can and not take any liberties. The client usually wants everything word for word…no exclusion of “ifs, ands or buts” even 🙂

I also try to memorize the other actors’ material or at least have an idea of the text that comes before and after my own. This saves time during the shoot, as well as creates an easy flow with the other characters. Memorization and choosing wardrobe (costume) are usually all that I need for pre-shoot preparation.

On the shoot days, I was called to the venue (Tampa hotel) at around 7am for hair and make-up. The team was a South African based production company known as Lobster Ink, and most of the members were based out of Cape Town. I’ve never worked with an international crew before, so this was a pleasant surprise. The female director, Carleen, was amazing and super helpful, direct and supportive of the actors. I really enjoyed working with her. Jackie, the producer, was also an immense help behind the scenes, along with the Hair and Make-up person, Francesca. I can’t STRESS enough how kind and open these people were for the entirety of the shoot. I HOPE to work with them again in the future. The purest epitome of professionalism! The other actors were extremely kind and talented! We all had our specific characters to play and formal objectives to present for the client. We handled each scenario with clarity, detail and accuracy. Both days were successful and the client liaison (who came from Atlanta) was pleased with the turn out!

Overall, it was another wonderful experience for the books 🙂