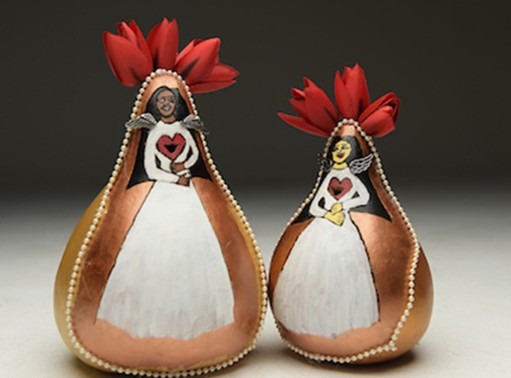 . . .
On Saturday, July 9 at 3 pm Robyn Crosa will host an Artist Talk at Gallery 120 at Largo Public Library about her solo exhibition, Gourdgeous Goddess Gals, on display through July 29. The event includes a children’s storytelling time and a musical performance of the American folksong “Follow the Drinking Gourd.” There will be a Spanish language interpreter at the event and it will be videotaped and posted to YouTube and Social Media.

Though she considers herself a naive, or self taught artist, Robyn has developed a system to creating her current gourd art, which she affectionately named Gourdgeous Goddess Gals. “I have a five-step process to creating my gourds. First, wash the gourds because when you get them, they’ve grown in the ground and they have dirt on them, so you have to take a vegetable scrubber and scrub them down and let them dry.

“Then I draw on them. I draw the faces of the women and the figures that I’m going to do. Then the next step is that I take a wood burner and I burn over the lines in the shapes that I’ve drawn, so that the figure of the goddess is etched into the wood. I then use acrylic paint and I paint over the gourds and then I do a gloss on top of the paint.

“The last step is that I take glue or use a wood staple to attach found objects to the gourds to kind of embellish them. I usually work on several gourds at a time and put each of them through the five-step process.”
. . . 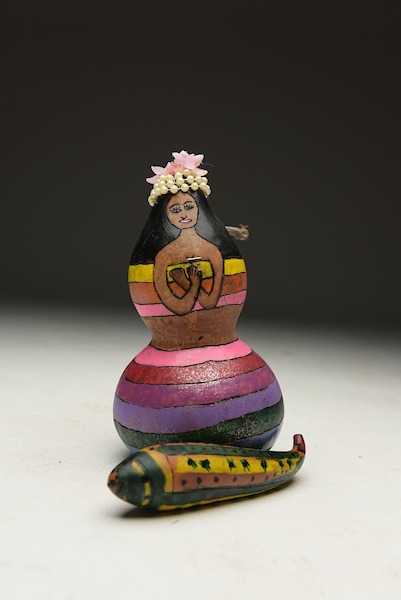 . . .
Robyn’s current Gourdgeous Goddess Gals exhibit theme is born out of her spirituality. “I am also a very spiritual person and I am a Goddess worshiper and I worship the Divine Feminine and so I started making little women who were supposed to represent different Goddesses from indigenous traditions all over the world. And what I found out in studying about gourds is that gourds are universally recognized by all indigenous people as being a symbol of the Great Mother or the Great Goddess – a symbol of Mother Nature and the Divine Feminine.

“What I also found out is that gourds are the oldest domesticated plant in the world – the oldest plant that people started purposely growing and the first cups and bowls that people ever used to eat, were made out of gourds. Also, when people discovered how to use fire, they would keep a hot coal from the flame in a gourd container and travel with it, so that way it would be easy for them to start a fire whenever they would make a camp.

“Gourds go all the way back to that first time in the history of humanity when we first really became human beings. They’re just a very ancient symbol of a time when the world was matriarchal and people believed that the Divine Creator was a female and so that just really resonated with me very much.”
. . . 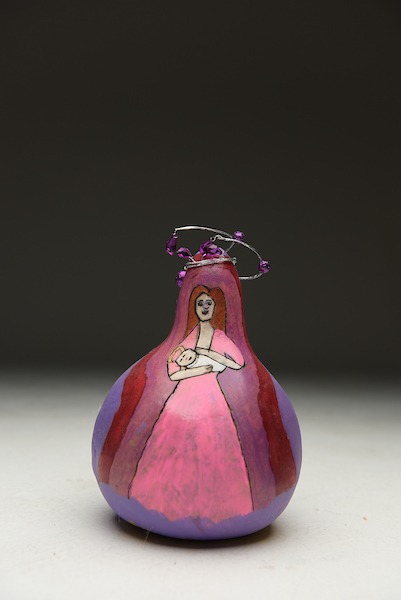 . . .
At the Artist Talk on July 9 Robyn will perform a traditional song entitled “Follow the Drinking Gourd.” She explains, “It’s an old abolitionist folksong that was written to help enslaved African American people escape to the North. They used to hollow out a gourd and use it as a cup to dip in a well and drink water.

“So when they looked in the sky at the Big Dipper they would call it the Drinking Gourd. . . and so this abolitionist wrote a song called ‘Follow The Drinking Gourd’ which was supposed to be an instructional song to help enslaved people know which direction is North by looking up at the Big Dipper. It was a secret song that was taught so that people would remember how to find North and they would use it as a way to escape. It is part of the Underground Railroad heritage.”

Robyn will also read a children’s illustrated book based on the song. “We’re going to interpret in Spanish so that everyone can understand and also my father is going to be there with me. He also speaks Spanish and he’s going to be playing guitar.”

Robyn is affiliated with the Women’s Caucus for Art, with the Mi Gente Mi Pueblo Latinx Community and also affiliated with NAMI, the National Association on Mental Illness. She says, “I want to invite people from these communities to come to the exhibit and to come to the Artist Talk and participate in art – it is for everyone, but it’s especially for people who feel marginalized or who are underrepresented.”
. . .