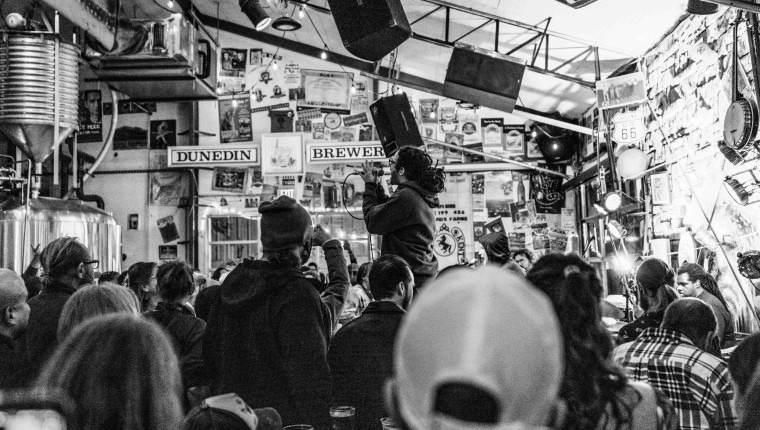 This song was a doozy, and took me a long time to write. Not only was the tune necessitating unbridled “badassery” based off its musical composition, but it was also written in multiple time signatures. The bulk of the verses are in 7/8 time, but at the tail end, they switch to a 6/8 Waltz. Then, the chorus, as well as the third verse, are in standard 4/4 (as to which we are most accustomed in contemporary pop/whatever music). I decided, lyrically, to take this song in a direction that satisfied something about which I needed to get off my chest.

2020 was obviously a trying year. Not only due to the pandemic, but due to imperative (and rampant) social issues making their way to the forefront. Of course, the media absolutely hyped up the hysteria… which resulted in a very stark separation of supposed fundamental beliefs and values, among the American Population. And when there was such disparity in support for, what I felt, was mandatory change needing to be made, I remembered the benefit on which we can always rely: “The Art of Punching Up.” This is, of course, reserved for anyone who IS underprivileged or disenfranchised in life—and it may likely only apply to you, partially. What’s the art of punching up? It’s pretty much your ability to criticize and make fun of any entity holding more power than yourself. The opposite doesn’t/can’t hold true (or it’s in extremely bad taste), because it’s a cheap shot, and frankly idiotic, for the more powerful/privileged body to be attacking the lesser. You’re straight-up an asshole if you punch down.

“The Art of Punching Up” was an opportunity for me to vent my frustrations at the world, and more specifically, the country in which I live. 2020 showcased a severe lack of empathy for those persons wielding less power. The evolution of Blue Lives Matter, as a response to Black Lives Matter, is exactly this concept at work. One entity is the controlling body that, at the end of the day, holds the upper hand. You don’t have to be anti-police to recognize the lack of tact and understanding in that reverse victimization. I mean, let’s be real here… an ex-Pasco County Police Officer just got acquitted for shooting a man in a movie theater, who threw popcorn at him. I don’t need to bring up the countless instances where this was NOT the case for a person of color. Regardless, punching up is reserved for those in the more compromised position. It’s why we are allowed (and should) make fun of Jeff Bezos—because he has more money than anyone else could possibly need, and dually doesn’t compensate his employees properly. Conversely, it’s why someone significantly lesser than you or me, financially, has the right to punch up at either of us. This song is about THAT. It’s a song acknowledging this reserved right, throughout the course of history…

“It’s echelonic, regardless ‘who you aren’t.’ Your cognizance influence how you might effectively align and mind the way you actin’ in a given context.”