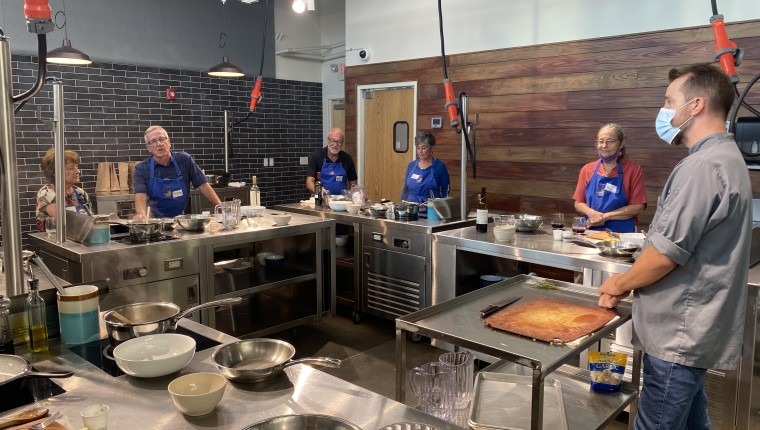 At the Dunedin Fine Art Center, some masterpieces are not on the walls. They are on the table. The kitchen table, that is.

For the past three years, DFAC has been offering dozens of cooking classes with such mouth-watering titles as Paris Summer Bistro, Taste of Thailand and Flavors of Sicily in its state-of-the-art kitchen classroom. Students create chef d’oeuvres — and then get to devour them.

As Marcella Hazan, the Italian-born cookbook writer who died in Longboat Key at age 89 in 2013 once said, “Cooking is an art, but you eat it too.”

In August, I attended a class called New Orleans French Quarter and although I will never be mistaken for a culinary artiste, I made a meal fit for a king (or queen) —  with the help of cooking instructor Chef Craig Tinling who earned his culinary degree in his hometown of Winnipeg in Canada. In registering for the course (cost $65 per person), I was required to sign up with at least one other person with whom I would feel comfortable working in close quarters. My friend Anthea Penrose (who has been in my COVID bubble since the beginning of the pandemic) agreed to become my cooking accomplice.

She and I arrived at DFAC 10 minutes before the 6:30 p.m. class, as instructed. After we had our temperatures checked at the front door, we were directed to the second floor. There, in a 1,400-square-foot teaching kitchen, Tinling and his assistant Alina Berje greeted us with aprons and two glasses for the BYO wine we had been encouraged to bring along (Anthea chose a Pinot Noir, I contributed a light Cab). Tinling then led us to a stainless-steel cooking station. The class was full – 10 students were paired two by two at the kitchen’s five stations. While Anthea and I were first timers, Linda Shutt Atkins and David Atkins of Dunedin, occupying the station next to us, admitted they were confirmed recidivists.

Each station was equipped with a cooktop with two burners  and a large countertop workspace laden with the ingredients, already cut and measured out, that we would be using for our cooking lesson – cups of oil, flour and spices. Bowls of crushed tomatoes, chicken broth, slices of Andouille sausage and bite-size chicken pieces. Onions, celery and green peppers (dubbed the “Holy Trinity of Cajun cooking”) along with garlic and fresh okra.

As we broke open our wine, Chef Craig, who also gives cooking classes at Casa di Mazzaro’s in St. Petersburg, outlined the meal we were about to create – Chicken and Andouille Sausage Gumbo over Red Beans and Rice. A butter lettuce salad tossed with crusty lardons and a home-made vinaigrette and topped with a poached egg. And, for dessert, beignets, those puffed pastries smothered in confectioner’s sugar that I have been dreaming about ever since I first encountered them at the Cafe du Monde in downtown New Orleans.

But first, Alina brought us hot French bread and seasoned butter to enjoy with our wine. “I make it different every time,” says Tinling when someone asked him for the butter recipe. This time he mixed a pound of “salted, pricey” butter with lemon juice, zest, cayenne, Dijon mustard, honey and black pepper.

We started by making the roux for the gumbo, mixing flour and oil in a heated pan. Tinling urged us to keep the heat up, stirring the sauce until it was the color of milk chocolate. “Like this color,” he explains, pointing to the room’s brown-paneled walls. When we eventually added the prepared gumbo ingredients, he told us to keep on stirring the gumbo as we tackled the rest of the meal.

For the rice and beans dish, Chef Craig taught us how to chop celery without cutting our fingers off – hold down the stalk by curling your hand into a bear claw, making sure you tuck in your fingernails. With the other hand, grip the chef’s knife with your middle, ring and pinkie fingers, pinching the blade near the handle with your thumb and index finger. Then cut the celery with a gentle rocking motion. He also suggested first sautéing the trinity of vegetables and then adding the garlic to prevent the cloves from burning.

As we grilled the lardons (which I learned are cubes of salt-cured pork) until they were crisp and mixed the ingredients for the vinaigrette, the chef taught us the best way to poach an egg – break an egg into a small dish. Slide the egg into a saucepan of simmering water and distilled vinegar, pushing the egg white around the yolk with a slotted spoon forming an oval shape. Let the egg cook for 2-4 minutes depending on desired firmness and then transfer the poached egg to a bowl of warm water. When ready to serve, lift the egg from the water with a slotted spoon, draining off any excess water.

For the beignets, Alina brought us a ball of prepared dough which we rolled out to a quarter of an inch thick and cut into squares. Then we were invited to drop our squares into a vat of oil heated to 350 degrees F on a stove in the back of the room. When the batter puffed up and was golden brown, we transferred the pastries with a slotted spoon to one of the paper bags filled with powdered sugar lined up on an adjoining table.

Confession – in the spirit of the infamous bumper sticker “Life is uncertain. Eat dessert first,” I convinced Anthea to join me in immediately gobbling up more than one of the piping hot beignets, now covered in powdered sugar, before they cooled off. I knew they would never taste as good as at that moment.

Before the pandemic, the DFAC class would have ended with a group dinner around a common table. Instead, we stuck to CDC guidelines for indoor dining and returned to our stations to savor the results of our labors with our cooking partners. We poured the gumbo over the rice and beans, plated the tossed salad and finished off a few more beignets.

As we left, Alina handed out printed recipes so we could try all these dishes at home. Would we? Alas, a team of assistants to do the shopping, chopping and measuring beforehand and cleaning up afterwards was not included.

Perhaps the Atkinses at the stove beside us have the better idea. Why not just take more cooking classes? DFAC is offering over 25 fall cooking classes, from Cooking With Wine on September 8 to Flavors of Morocco on November 19.