A Love Letter to Linda

Anne Hampton Callaway, regarded as one of our finest purveyors of the Great American Songbook, adds a new wrinkle to her current show. She rocks.

The Linda Ronstadt Songbook — the latest in Callaway’s “legacy series of women who inspire me,” which has featured the music of Ella Fitzgerald, Sarah Vaughan and Barbra Streisand — includes several of Ronstadt’s rock-oriented tunes, among them “You’re No Good,” “When Will I Be Loved?” and “Poor, Poor Pitiful Me.”

“When we originally conceived the show, I kind of assumed I’d be singing mostly the standards,” says Callaway, referring to Ronstadt’s best-selling trilogy of records with arranger Nelson Riddle in the 1980s. “But ultimately it seemed like a better idea to interpret her more well-known hits.

“Since I focused a lot of my life on jazz and standards, it’s very exciting to get into the soft-rock that I had never explored that much in my career. It’s exciting for me as well as the audience. And I’ve found that it’s more fun.”

Eddie Vedder and Joan Jett needn’t feel threatened, but Callaway sings the more rockin’ Ronstadt tunes with a certain abandon that’s a departure from her usual cabaret-style elegance, if not quite the snarl that Ronstadt conjured. Still, the rangy, crystalline character of Callaway’s voice shines through, and her fans will likely enjoy these steps outside her comfort zone.

Callaway also includes such standards as “Somewhere Out There,” “What’s New,” “I’ve Got a Crush on You” and “Someone to Watch Over Me” — songs that Ronstadt’s ‘80s albums helped introduce to a new generation. 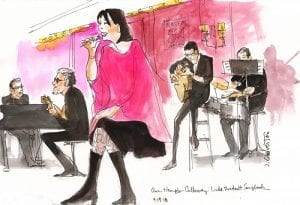 Ronstadt played her last concert in 2009 after experiencing vocal problems. She was diagnosed with Parkinson’s Disease in 2013. “It absolutely breaks my heart that someone as special and talented as Linda, someone who has given so much, can’t sing anymore,” Callaway says. “That was part of the motivation for the show.”

Callaway, 61, started the Ronstadt songbook project about two years ago. She earned Ronstadt’s blessing through a mutual friend. “Linda and I talked on the phone and exchanged emails,” Callaway says. “She helped me along, found some symphony charts from her performances.

“I don’t create tribute shows, I think of them more as artist profiles.”

The difference? “A tribute show is playing a bunch of songs as similarly as possible to the original performer,” Callaway explains. “My profiles have a narrative and give thought to the emotional arc of an artist’s life and career. I would never mimic Linda Ronstadt.

“I have ‘You’re No Good’ people in my life. I’ve had ‘Poor, Poor Pitiful Me’ times, so it’s a matter of digging into those emotions and memories and making them vividly come to life in the moment. One of the main things that people enjoy is having these songs interpreted by somebody who’s much more mature than Linda when she recorded most of them.”

Callaway has performed the Ronstadt set with small combos and full orchestras. Her appearance at the Palladium Side Door Cabaret on Thursday, December 19 will be only the second occasion she’s done the show as a duet, each time with pianist/singer Billy Stritch.

“At first I was really hesitant to do it with just the two of us,” Callaway admits. “‘What’s it going to be like without drums?’ But Billy is a phenomenal human orchestra. One of the great things about the duo show is people can better hear the nuances in my voice and the storytelling of the words. The intimacy certainly comes through.”