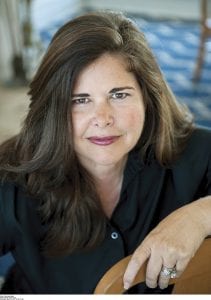 I sat down with Lisa Unger, New York Times best selling author and Pinellas County resident to chat a little bit in advance of the launch of her 17th novel, The Stranger Inside.

We met at a small coffeeshop with a beachy vibe and an old piano, that at one point during our conversation spoke so strongly to a customer waiting for his coffee that he had to sit down and play, drowning out ours and everyone else’s ability to speak with and listen to each other.

You might expect that the discordant and ridiculously loud sounds would set your typical crime novelist on edge. But Unger, who earlier had gotten up from her seat to hold the door open for a mom awkwardly wheeling in her baby-carriage, relaxed into her chair and shrugged. And for a moment we both resigned ourselves to waiting until he was done.

By the second song, the jingle-jangle of the out-of-tune-piano was more than I could bear, and I went up to the player and asked him if he could stop. But it was interesting to see that Unger, writer of psychological suspense and diviner of the deepest secrets of what compels somebody to behave the way they do, was willing to let things unfold the way they would. And with that, the secret of her novels, and her perspective as a writer came clear.

She never tries to force the voices of her character, or their actions. She puts them into play and lets them evolve as they will.

“I hear sentences and phrases,” she says in describing the start of her process. “Or I see images. For Angel Fire (her first book) I saw a character running across a landscape. I didn’t know who she was, or what she was doing. But I wanted to find out. That’s really what motivates me. I have a ferocious curiosity to learn about the characters who people my work. Who are they? Where do they come from? What makes them tick? I want to see what happens.”

In that way, Unger is a stand-in for her readers, enough of whom want to see what happens — over and over again — that they have propelled her to the top of the NYT best seller list, earned her two Edgar Award Nominations and finalist status for the Macavity and Hammett Prize Award, three of the mystery world’s best.

“I have always been a writer,” says Unger. “Even as a small child I knew that’s what I wanted to do. My mother was a librarian, so I was raised in the milieu. Books and reading were a staple of my life. Our house was filled with them. If I could climb up on the shelf and pull one down, I was encouraged to read it.” 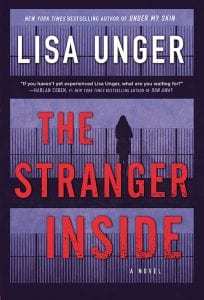 Unger also attributes much of her practicality to her father, an engineer. “I write every day,” she says. “And I approach my work the same way anyone committed to their job and to doing their work at the highest level would. It’s nuts and bolts on some level. This is my role. This is what I do. How do I do it as well as I can? How do I learn and take it to the next level, so that with each book I’ve grown as an author?

“And then how do I address the business side of publishing? There is a machine in place, and very early on I learned the ins and outs of that process.” Unger was in a high-powered PR position at a publishing house, prior to beginning her career as a writer.

At the same time, Unger is very clear that the process of writing is infused with mystery. “I don’t know what is going to happen,” she explains. “I walk into a specific story with my eyes wide open. What can I discover? Who is this character and what are they going to do? I am intrigued about what makes people respond to situations in certain ways and how they behave,” she adds. “I want to know. How do we get to be who we are? Why do we make the choices that we do?”

Unger is known for getting under the skin of characters both creepy and heroic. “I was very taken by a book by Donald Kalsched, The Inner World of Trauma,” she says. “In the book he writes about how the psyche deals with childhood trauma and how certain aspects of a personality grow stronger to protect a child’s emotional and psychological wellbeing, and the consequences of that. In a sense,” she adds, “that explained to me what I was already interested in as a writer, and has informed my work since.”

Published in 1996, before the concept of PTSD become part of everyday vernacular, Kalsched’s work plumbs the hidden ways in which a child’s psyche might create inner defenses in response to “overwhelming life events.”

Recognizing that for a young child this could be witnessing violent behavior, but more often could be casually humiliating actions, Kalsched investigates shame, malevolence, inner torment — and fiercely protective responses, both defensive or aggressive.

If this seems like the operating principal behind the behavior of Unger’s characters — those that live in light and those that function in the darkness, it is.

And it may also be be the chord that travels through all 17 of her novels, including her newest The Stranger Inside, already named a “Best Book” by People Magazine, The Boston Globe, Pop Sugar, Crime Reads/She Reads and Mystery Tribune.

Colette Bancroft of the Tampa Bay Times writes about the book, “Unger builds believable characters whose lives seem ordinary until they are plummeted into some extreme situation that changes how they see the world, and themselves. . .  Her books are first-rate crime fiction, but the most engrossing questions they pose aren’t really who committed a crime, but why it happened.”

And that is exactly what Unger — author, disciplined writer, mom and polite Pinellas County neighbor — wants to know.

Find out more about
The Inner World of Trauma:
Archetypal Defenses of the Personal Spirit
by Donald Kalsched, Psychology Press, 1996