The people who make up the Tampa Bay area come from every inch of the globe, and The Florida Orchestra pays tribute to this diversity for the opening of its 2019-2020 season.

“This is an unusual program,’’ says music director Michael Francis. “The purpose really is, what is Tampa Bay and who are the people that live here? So, I wanted to draw attention to a musical portrayal of the elements that make up Tampa Bay.’’

The most unusual piece is a first by the orchestra, Mothership by a young Virginia-born composer named Mason Bates. Part classical pundit, part disc jockey, Bates has developed a compelling voice, writing music “in a real American language,’’ says Francis. He views this eclectic new work as the “musical equivalent of a modern city.’’ It’s an ear-smacker that blends orchestral, techno, pop and swing motifs.

“When I’m writing music for the concert hall I go after what is the most pregnant musical possibility, not just the outreach component [winning new audiences],’’ Bates explains by telephone. “Older subscribers go along because they can tell I have roots in classical music. But I think listeners enjoy the collision of an old medium with sounds that could be on their iPod. With Mothership, the music has surface newness and some real tethering to the symphonic tradition.’’

Mothership was first performed in 2011 at the Sydney Opera House and broadcast live on YouTube to nearly 2 million viewers. The one-movement, 10-minute work is a rhythmic tour de force that wastes no time getting off the ground. 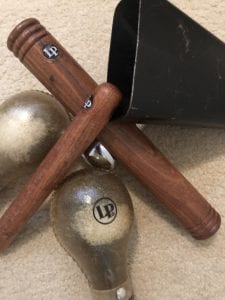 The orchestra opens the night with George Gershwin’s Cuban Overture, a musical postcard capturing Gershwin’s whirlwind two-week vacation in Havana, where he admitted drinking too much booze and not getting enough sleep. He was fascinated by the colorful street bands and their instruments: bongos, claves, gourds and maracas.

“Cuba was most interesting to me,’’ Gershwin wrote, “especially for its small dance orchestras, who play the most intricate rhythms most naturally.’’ He returned to New York along with a collection of Cuban instruments, and in the summer of 1932 finished the 10-minute score to Rumba, soon to be given in a more fitting title before a benefit concert at the Metropolitan Opera.

The Cuban Overture is cast in a single movement with two fast outer sections serving as bookends to a slow middle, with ample instructions to be played with warmth and expressiveness. The music is full of sparkle and rhythmic verve, which mask the intricate contrapuntal technique Gershwin had been studying and proudly employed in the opening section.

Wanting to showcase the original instruments he heard in Havana, Gershwin insisted they be placed in front of the conductor’s stand, treating them as soloists and delighting audiences lucky enough to sit close to the stage.

The concert’s centerpiece is Edvard Grieg’s evergreen Piano Concerto, with Frank Fernandez at the ivories. Norway’s best-known composer, Grieg was more comfortable with small forms, so this may be the least characteristic of all his works, but one of the most-performed of all concertos.

Grieg drew inspiration after hearing Schumann’s Piano Concerto in A Major in a performance by his wife, Clara Schumann, at a concert in Leipzig. In fact, the opening of both works seem to be cast from the same die. Afterward, in 1870, Grieg had the fortune of meeting the great pianist Franz Liszt, who was impressed with the younger composer’s First Violin Sonata. Grieg shared the handwritten manuscript of his Piano Concerto, which Liszt played by sight and offered advice on orchestration. Grieg accepted some of his counsel, and in fact continued to dabble with the piece. From its inception in 1868 until the year of his death, Grieg revised the work no less than eight times.

The concerto opens with a salvo: a timpani roll followed by a series of descending octaves by the piano. From there, Grieg condenses his material into a neatly packed development section with not one wasted note. Near the end, the soloist takes over with an impassioned cadenza. The adagio requires an unerring delicacy from the soloist, free of frothy showmanship, and when done well this movement mirrors Mozart.

The piece closes with a flourish, a fast-paced Norwegian dance known as a halling, even if piano and orchestra are not all that well integrated and Grieg doesn’t fully develop his material. Most concertgoers could care less — they leave the hall humming tunes all the way home.

Who better to represent our area’s German heritage than ol’ Ludwig van Beethoven, who steps in this weekend with his Leonore Overture No. 3. No single work gave Beethoven more fits than his lone opera, Fidelio, which he struggled with for a decade and wrote no less than four overtures. ”This opera will win for me a martyr’s crown,’’ he once grumbled.

Beethoven’s angst has been attributed to his perfectionism in setting to music his poetic ideal of freedom, as he would do so magnificently in the Ninth Symphony. The opera, however, ran into all sorts of artistic and production snags that demanded revisions of the original overture to better suit his largest score – or in the case of the Leonore Overture No. 3, to not suit it at all.

The overture simply overpowered the opera’s emotional drama, muscling the opening scene, stealing thunder from the action’s middle and spoiling the surprise ending. This was potent stuff, and soon took on a life of its own as an orchestral work preceding the great single-movement symphonic poems that echoed through much of the 19th century.

At just over 12 minutes and crafted in sonata form, the overture is a marvel of musical storytelling, capturing the light-triumphs-darkness motif as well as anything Beethoven ever wrote. He identified with the plight of Florestan, the high-minded husband of Leonore who is unjustly sentenced to isolation in a tyrant’s dungeon.

Disguised as a man (Fidelio), Leonore gains access to the prison and frees her lover, setting in motion themes of injustice, empowerment, good over evil, hope and the exhilaration of freedom.

The Florida Orchestra wraps up its opening weekend with a tribute to Spain, even though the composer, Maurice Ravel, was French. But his famous Bolero is a purely Spanish twirl and one of the more insistent pieces of classical music ever written. Ravel composed it in 1928 for an obscure ballet and intended it to support dancers, not serve as a stand-alone concert hall piece. He even called it “orchestration without music,’’ but harsher sentiment followed the premiere, when a critic called it “the most insolent monstrosity ever perpetuated in the history of music.’’

Today, Bolero ranks with the Beatles in airplay (well, almost) and enjoys a hybrid status of being at home on both masterworks and pops programs.

Yes, Bolero is a study in repetition – the same C major pattern repeats itself 13 times against a snare drum – but it would be an injustice to call it simplistic. This, in fact, makes it so entertaining. A long crescendo based on two themes and decorated in the flavors of Spanish flamenco, the work moves forward on an insistent rhythm that grows louder and louder. Bolero begins quietly and ends demonically, a traditional form turned on its head, with exhilarating effect. The genius of Bolero is not that it challenges listeners, but that it makes no demands at all.