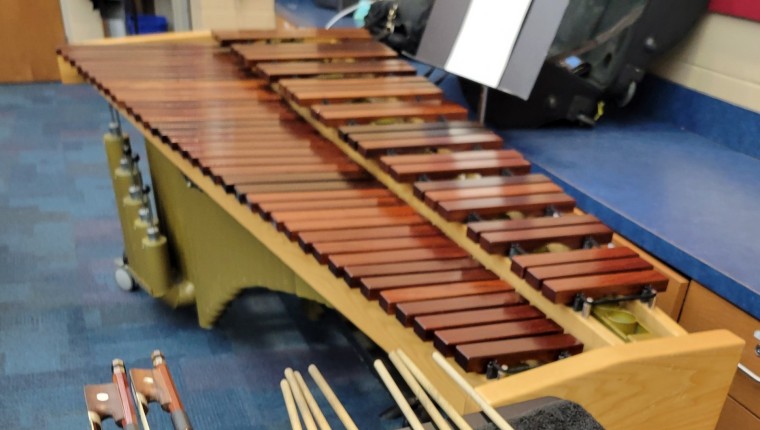 . . .
Each year in October, the flagship ensemble of the Dunedin Music Society –  the Dunedin Concert Band – programs a major symphonic work to challenge its hardworking and talented performers.

This year’s featured concert work is the Marimba Concerto #2 by David Gillingham, performed by the concert band’s very own Alex Guini, a graduate of the University of South Florida School of Music and alumnus of its percussion studio.

Led and conducted by Maestro Stephen P. Brown, the Dunedin Concert Band is thrilled to bring this work to Pinellas County on October 16 as the DMS continues its mission to connect local communities with live music experiences they can treasure for a lifetime.

. . .
If you don’t know what a marimba is – it can be one of the most exotic, calming, mesmerizing instruments ever invented. . . in the right hands, of course.

Much like a xylophone, a player uses mallets on a “keyboard” of wooden blocks, instead of metal like a vibraphone or glockenspiel (bells). The sound that comes from the marimba is therefore more muted than the xylophone and other metal percussion instruments and can create beautiful melodies and harmonies.

At one point in the piece, the soloist may also use a nontraditional musical method of making the marimba keys vibrate. . .

. . .
In this particular program, the Marimba Concerto is matched with Argentinian composer Alberto Ginastera’s Symphonic Dance suite titled Estancia. According to the description in an article by Betsy Schwarm, the piece is “an orchestral suite and one-act ballet that, through its references to gaucho literature, rural folk dances, and urban concert music, evokes images of the diverse landscape of the composer’s homeland.

“The Estancia ballet tells the story of a city boy in love with a rancher’s daughter. At first, the love affair is one-sided, as the girl finds the boy spineless, at least in comparison with the intrepid gauchos. By the final scene, however, the hero has won the girl’s heart by outdancing the gauchos in a traditional contest on their own terrain.”

Come and see if that’s what you and your friends and family members will experience through the music!

. . .
Other pieces in the program include works by Khachaturian, Tatebe, and even a Sousa march, rounding out this Intercontinental Celebration.
. . .

Dunedin Concert Band performances are ideal for ages 7 and up.
. . .