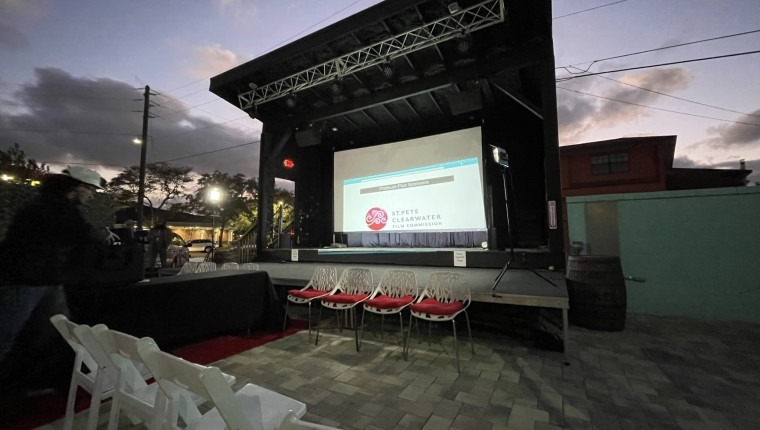 Story and Photos by Jennifer Ring
. . .

. . .
I remember when Dunedin House of Beer was a tiny taphouse on Broadway, and it still is. But now there’s more. In 2019, HOB added another downtown Dunedin location – an outdoor patio and recreation area on Huntley Avenue called HOB Brewing Co. The new space features a patio full of picnic tables next to a swath of kid-friendly artificial turf. Above the turf, hops wear sunglasses and congregate by a bonfire on the beach in a colorful mural.

In 2022, inspired in part by DIFF, HOB Brewing Co. grew to include an additional events space. This is where the 5th Annual Dunedin International Film Festival begins, with its first directors’ panel, in a beautiful outdoor “garden” theater that looks like it was made to show movies.

Apparently getting board members onstage is a bit like herding cats. Festival President Cameron Ilan repeatedly called names out over the mic until they all made it up to the stage, slowly, one by one. Each board member introduced themself before getting into the meat of the discussion — what film festivals are for, why Dunedin has one, and what this year’s film festival holds.

“Discussion is the heart of a film festival,” Ilan said to the audience. “It’s about meeting the people and having conversations.”

Shared values played a large role in film selection this year, especially when it came to ocean conservation, sustainability and providing natural habitats.

Ilan launched the festival with an hour-long block of short nature documentaries, one of which was filmed right here in Dunedin.

Tippin, Konger and Bouchard appeared in a post-screening panel along with Ilan, who directed the film, where they discussed the making of Beacon City and announced the date for this year’s annual Hope Spot Festival. It’s February 11 at Dunedin’s Edgewater Park, and features performances from Dunedin favorites Wendy Barmore and Jesse Ray Stout along with an eco-friendly wearable art/costume contest and more.
. . .

Water Colour follows wildlife artist Jane Smith as she works in the area surrounding the UK’s first Hope Spot, the Sound of Jura, off the West Coast of Scotland. Despite being a protected area, dredging still occurs here, which Smith hopes to raise awareness of with her art.

This visually stunning film, featuring Smith’s art and the wildlife that inspires it, won the festival award for cinematography.

What Inspires Us to Make Art?

More than just introducing a Hope Spot off the West Coast of Scotland, Water Colour provides a thoughtful reflection on the things that inspire us to make art – in Smith’s case, nature.

In the case of Steven Spathelf, it was a lack of public art in his hometown of Dunedin.

“We had this reputation as an artist’ community, but we had no public art,” Spathelf said after an encore screening of his namesake film, Spathelf.

Local filmmaker Sheree Johnson’s short film, Have You Seen my Hat? was inspired by boredom. Johnson shot the film during COVID with her 90-year-old mother, who has since passed. Johnson’s mother had severe Alzheimer’s/Dementia, which Johnson incorporated into the script.

Have You Seen my Hat?  tells the story of a woman determined to make a statement, if only she could find her hat. It’s amazing how this particular film tackles dementia, family life and human rights in a swift, highly entertaining, three minutes. Two months later, Johnson’s mother didn’t remember filming it.

“It was fun, I will always have it, and I will miss her,” Johnson said at the panel following the screening. Festival President Cameron Ilan was inspired to direct Beacon City by something Dr. Sylvia Earle once said. And I’m paraphrasing here —  everyone has something that they do well, whether it’s writing, speaking, photography or exploring – and that’s how you can help conserve our oceans. For Ilan, that one thing is directing films.

For Sarasota musical performers, Sharon and David Ohrenstein, art was a calling. For their daughter, Kathryn Parks, who relayed her parents’ story in the 45 min-long documentary, The Fabulous Ohs: The Marriage and the Music, inspiration came from a short film that screened at DIFF three years ago — a student telling their parents’ love story.

Before that, Parks hadn’t considered that a personal documentary about one’s parents could be enjoyed by people outside of the family. But Parks’ parents are far from typical. They’ve lived an artist’s life, writing/composing and performing onstage together for decades, collecting more than 40 VHS tapes of performances along the way.

“David was a fanatic about getting everything filmed,” says Sharon Ohrenstein, who attended the DIFF screening.

Parks bought an $80 VCR off ebay so she could view all the tapes and pick out what was integral to her parents’ story. The biggest surprise, which didn’t make it into the documentary, was discovering one of Mom’s burlesque performances. Sharon assures me that she was fully clad throughout the number – but as Parks points out, burlesque is a tease, and you never know how far it’s going to go.

. . .
The Dunedin International Film Festival
is a recipient of the Pinellas Recovers Grant,
provided by Creative Pinellas through a grant from the
National Endowment of the Arts American Rescue Plan.