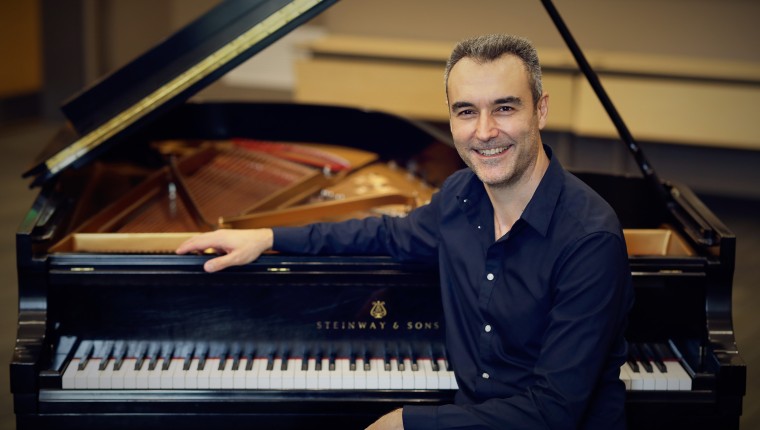 A Pianist’s Path of Self-Discovery

. . .
Everyone, at some point in their lives, asks themselves that fated question – “What is my purpose?” Some people become obsessed with this question, while to others it’s another passing thought that gets lost in the white noise of their busy lives.

The journey to find one’s purpose looks different for everyone. Some people take long detours, others start by going in the opposite direction, while many head straight to their destination, but their roads are filled with speedbumps. I had the chance to sit down with Pablo Arencibia to discuss his personal journey that led him to become a renowned jazz pianist who has performed around the world and teaches at the University of South Florida.

Pablo Arencibia was born in Caracas, Venezuela. Pablo wasn’t the only one in his family to love music – he comes from a family of creatives. He describes his father as someone who loved the Spanish guitar. His mother loved to sing. His older sister became a professional composer, organ player and singer. The only sibling who decided not to pursue music was his other sister who decided to paint instead. His childhood home in Caracas was filled with instruments, so to Pablo, choosing a career in music made sense. “It was very natural for me to start. So it was not something I remember questioning myself, do I want to do this?”

Out of all the instruments strewn around his home, the piano was the one that caught his attention. Much like how his path in music as a child was clear-cut, so was playing the piano. He started to learn from his older sister before moving on to piano lessons with a family friend. “The piano is very visual. In the piano, you see the notes standing right there in front of your eyes. And once you get used to that, it’s kind of hard to move away from that,” Pablo explains.
. . .

Pablo Arencibia, saxophonist Jack Wilkins, bassist Michael Ross and
drummer Dave Rudolph performed the first ever jazz concert at UT’s Gordon
Theater last month, performing original compositions including Arencibia’s, “Who Am I?”
. . .
As he gained proficiency, he entered the National Venezuelan Conservatory in Caracas and graduated at the age of 16 — the youngest graduate in the conservatory’s history. But after spending most of his life with music, Pablo wanted to explore new passions in his life.

His parents wanted him to go to continue down his path and grow as a musician, but Pablo, feeling burnt out, wanted to study computers — something he grew increasingly interested in. “My parents were expecting me to go somewhere in Europe and get a master’s… but I was really tired, and it was so many years being a young kid and every year the performances, the exams, the competitions… So, I needed a break,” Pablo says.

He took a break from music and went to college to pursue an engineering degree in computer science before moving to Spain — the country his family originally lived before moving to Venezuela. His life had taken its first substantial detour from music as he worked for Procter and Gamble and then Hewlett-Packard.

But he couldn’t give up his passion for music so easily. While working as a computer engineer, he still studied and practiced classical piano. Eventually he crossed paths with two notable influences in his life while living in Spain – Guillermo Gonzalez, a Spanish classical pianist and Pablo Gutierrez, a jazz pianist. While studying under Gutierrez, Pablo slowly shifted his focus from classical piano to jazz.

“I still enjoy playing classical music very much, but jazz has been such a self-discovery process. It’s like getting into an artform that nobody told me about, that I discovered by myself. And it was a very personal experience to realize about improvisation… I enjoy that presence and the liveliness of something that you’re creating right there with what you feel in that moment. For me, that is unbelievable.”
. . .

. . .
Since beginning his foray into jazz piano, Pablo continued his growth as a musician with performances for the Romanian Royal family alongside other musicians he hadn’t played with before and a particularly memorable performance in the Thessaloniki Concert Hall in Greece, where he played on a hybrid electric-acoustic piano for the very first time. His journey took him down a familiar road, but with one main difference – he created this path for himself.

This path eventually led him to Tampa where he earned his master’s degree in jazz piano performance at the University of South Florida (USF).

Pablo was invited to Tampa by a friend who ended up introducing him to the faculty at USF. In addition studying jazz piano at USF, Pablo was swayed by the prevalent Hispanic influence in the Tampa Bay area, as well as the prominent musical scene in both Tampa and St. Pete. Not to mention that Orlando and Miami were only hours away, which allowed him to further expand his horizons and connect with musicians throughout the state.
. . .

. . .
That’s not to say he didn’t face challenges when moving here from Spain. One of the biggest obstacles Pablo had to overcome was adapting to the different way that people socialize here. It was a far cry from how people get to know one another in Spain:

“The socializing aspect is very different… the way that people share with others is so different here.” He found that in Florida, “things are so spread out. Your daily life is so different… you get into your car, and you drive somewhere. You do your thing, and you go into the car and go back home and that’s it…

While the change in culture was difficult in some areas, Pablo found ways to connect with musicians and artists in the area. Through studying and practicing music, he became part of the music community here in Tampa Bay. “There is an interesting community of people with different cultures, and with a lot of knowledge of [the] arts. People who have traveled the world, especially in [the] St. Pete area. It’s like I’ve met so many interesting people and sometimes you start talking to someone and they seem to know more than you about some cities in Spain!”
. . . . . .
While pursuing his master’s in jazz piano performance at USF, Pablo was hired as a music instructor for a joint project between the psychology department and the music department, focused on how music learning influences brain activity in older adults. “[I] never saw anything like that in my life, especially with older adults without music experience. And then in a few weeks you get these people playing piano and wow, that’s amazing.”

Pablo was no stranger to teaching. While in Madrid, he served as Director of Contemporary Composition Studies at the TAI School of Music  at the Universidad Rey Juan Carlos Campus de Madrid. But while he studied at the research lab here at USF, he became fascinated with finding ways to “get a student to discover a different way of doing things.

“I got more and more interested in what are those skills that supposedly you can’t really change in a person – and in music, there’s a lot of research going on about that.

“There are some aural skills that are supposed to be genetic or somehow skills that you acquire in the very early stages in life, and that you can’t change. And I have had so much experience in changing those skills and helping people overcome some of those obstacles.”
. . .

. . .
To Pablo, the most rewarding aspect of teaching has been to help a student make progress in something that they have been struggling with for years. To this end, he decided to not only teach classical and jazz piano at USF, but to teach at Hillsborough Community College and the University of Tampa. To teach has been a “dream come true.”

As for Arencibia’s future, he is unsure where his path may take him next. Even though he has the desire to explore new venues and opportunities around the country, he met plenty of fantastic musicians in this area who he loves to perform with such as USF Jazz Program Director Jack Wilkins, Sarasota jazz bassist Michael Ross who has four albums under his name, and Dave Rudolph — a jazz drummer and composer who recently released his album Resonance. Together they recently performed the first ever jazz concert at the Gordon Theater in the University of Tampa, performing only original compositions.

One thing is certain – Pablo Arencibia will continue to play his heart out and connect with any musician or person he meets. For Pablo’s journey of expressing himself through music shows no signs of stopping anytime soon, and he is more than happy sharing that joy with others as they forge their own paths.

“I’m proud of the people I’ve played with, the places I’ve played in,” he explains. “That’s been my personal experiences with audiences who have been so happy to listen to great music… that for me is the main thing…

“I enjoy what I know, and I try to play the best I can. And I try to express myself as an artist, to be a human being, with what I have… When one person comes after [a show] and they say, ‘Hey, your music really touched me’ – that is for me, the best reward ever.”
. . .