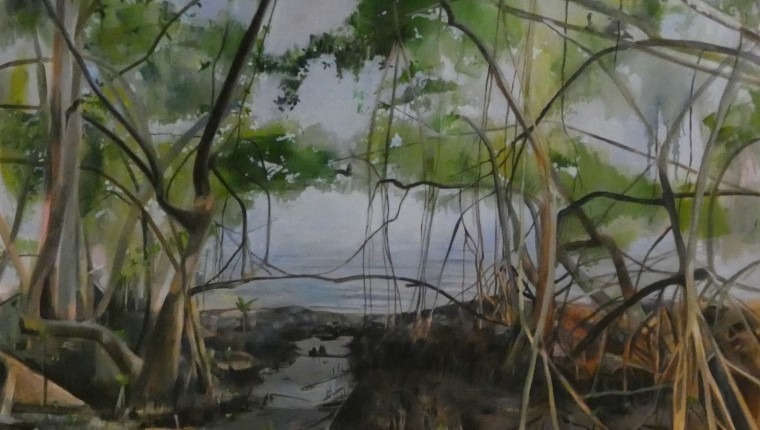 Inspiration Captured on Canvas
a Look at Harriet Monzon-Aguirre

. . .
Harriet Monzon-Aguirre opens the front door to her Safety Harbor home. Her two-year-old son Thomas rests against her shoulder as she leans to accommodate him on her hip. “Come in,” she says. Her smile is authentic. Her kitchen offers the welcoming aroma of freshly-brewed coffee.

“It’s not a big space,” she says, handing me a full cup. She carries Thomas as she walks toward a brightly-lit back room — the Florida room. “But the sunlight . . . it’s perfect for painting.”

Harriet divides her artistic life into three chapters. The first introduces a very young and enthusiastic artist to the business side of art, selling paintings of flora in art galleries on the island of Barbados, where she grew up. She describes the second chapter as a time when she focused on a series produced while she studied for her Master of Fine Arts Degree in Newcastle. The art that came from that period reflects an examination of national identity. But her third chapter, the chapter she is experiencing now, may so far be the best part of Harriet’s story.
. . . 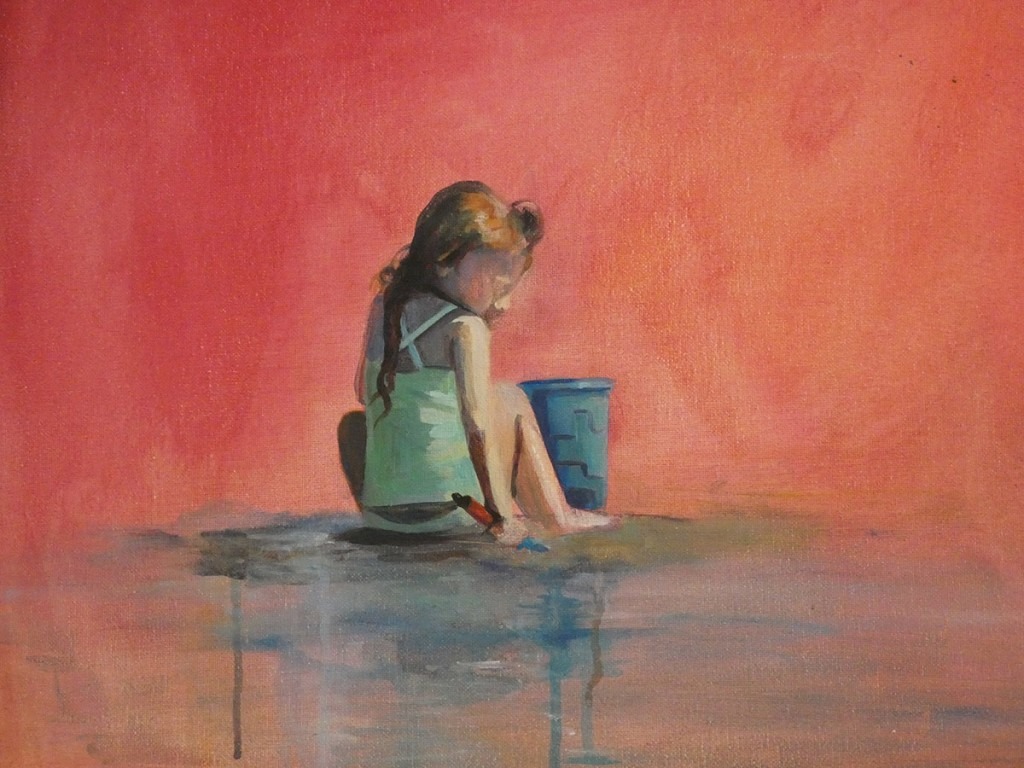 . . .
“My husband Carlos and I initially created Bahia Studios so both of us could pursue our hobbies.” Now, Harriet is dedicated to painting and being a part of the culture of Pinellas County. “Bahia is Spanish for bay,” she says. “The term bay for me symbolizes a place that is secure.”

Safety Harbor offers the kind of security that Harriet has longed for. She has connected in a way similar to how the centuries-old oaks have taken root around her home, intertwining and collectively reaching across miles under sandy soil. Harriet has gotten to know the wildlife, the water, and her favorite subject, the mangroves. “I feel like because of my past experiences, one of the things I strive for is to let my three children have a sense of belonging,” she says. “I have always felt out of place. Like I am from a different century. My art is about longing to belong.”
. . . 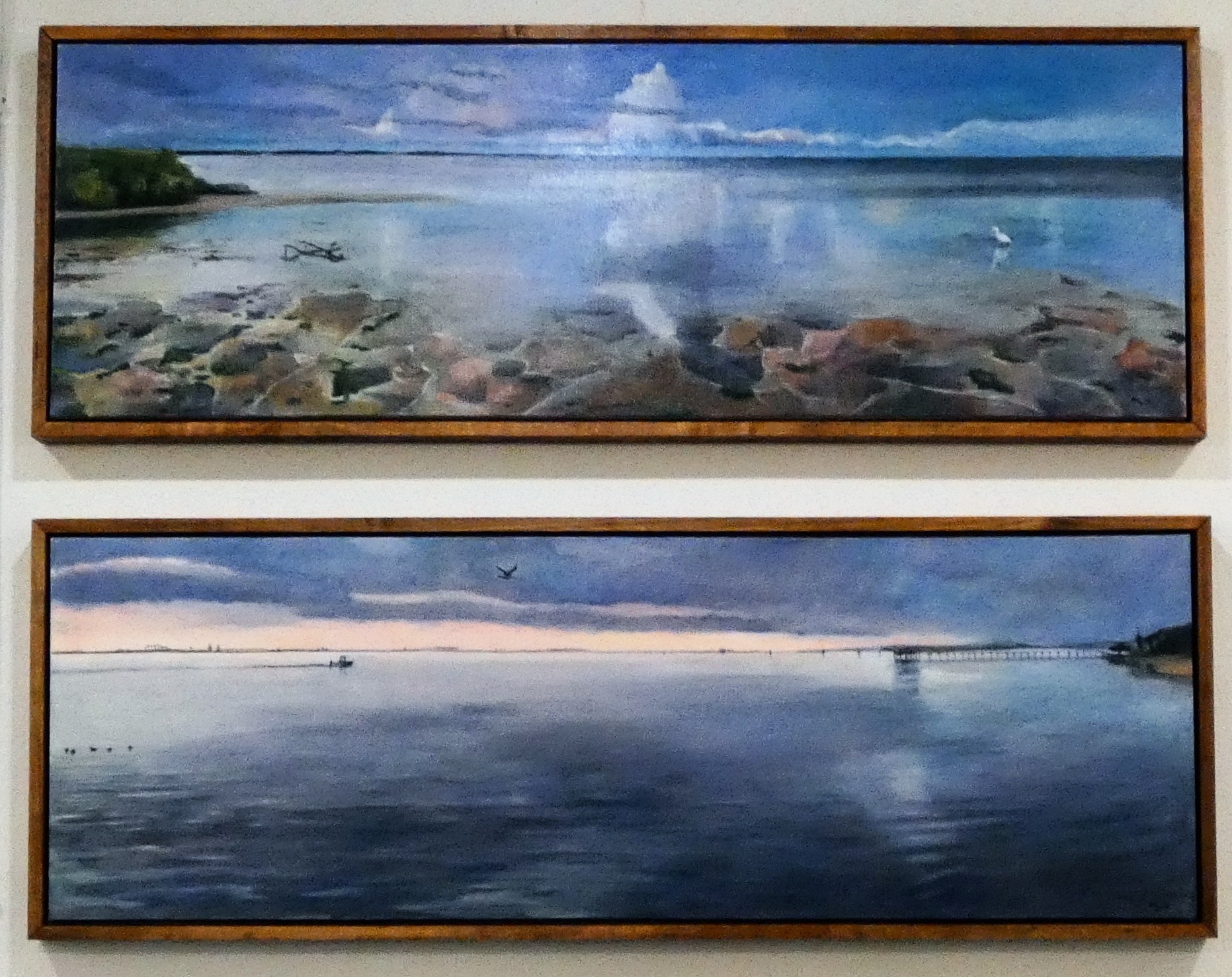 . . .
Harriet is in her early 30s but she exudes the wisdom of someone who has already experienced a lifetime of learning. She’s open to new experiences, especially when she believes it will enrich her children’s lives. “We went to Colombia for six months,” she says. “It was not as easy to acclimate.”

But Harriet had been away from painting long enough for the passion to dissipate. “I was unhappy,” she says. She and Carlos returned home to Safety Harbor.

Harriet began walking with her children and her camera. Inspiration followed. She started painting the images she had captured. “I wanted to show my littles that I am following my passion and it is through my art that I try to process my environment, my space.”
. . . 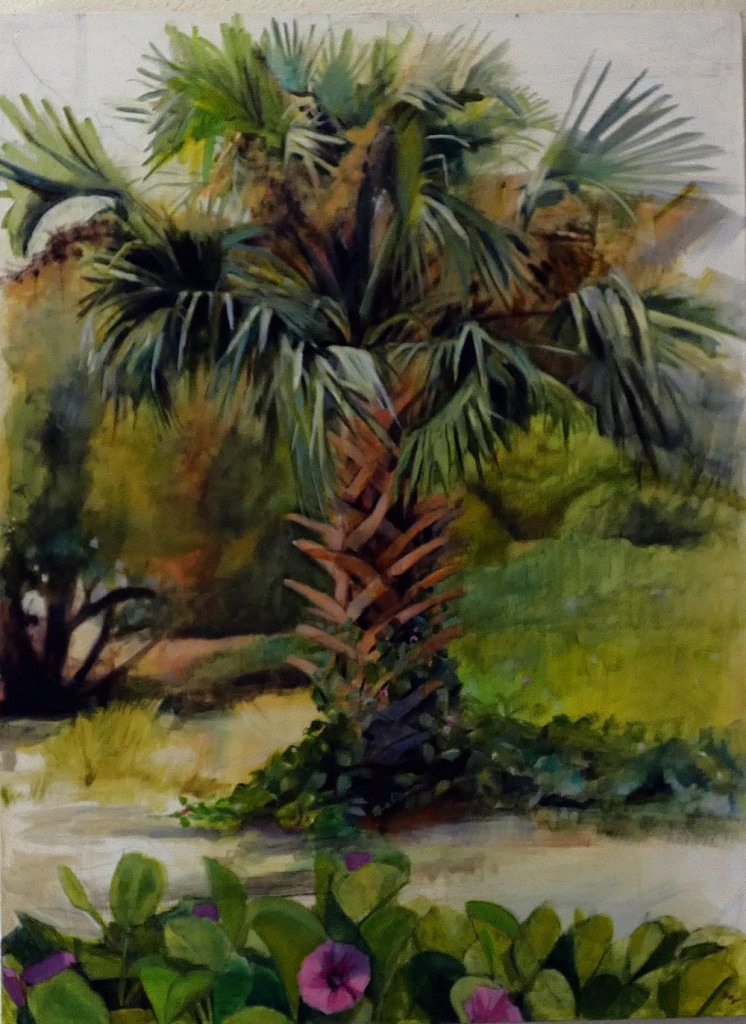 . . .
Harriet’s daily walks provide new experiences to ignite inspiration. “I take as many photos as I can,” she says. “It’s a combination of trying to capture things about the surroundings. Something that catches my eye. I don’t have time to draw and sketch while there. I really love mangroves, how they intertwine. How the light bounces off of them. But I am also drawn to light on water, the reflections — when the Bay is like a mirror and you see the sky reflected.”
. . . 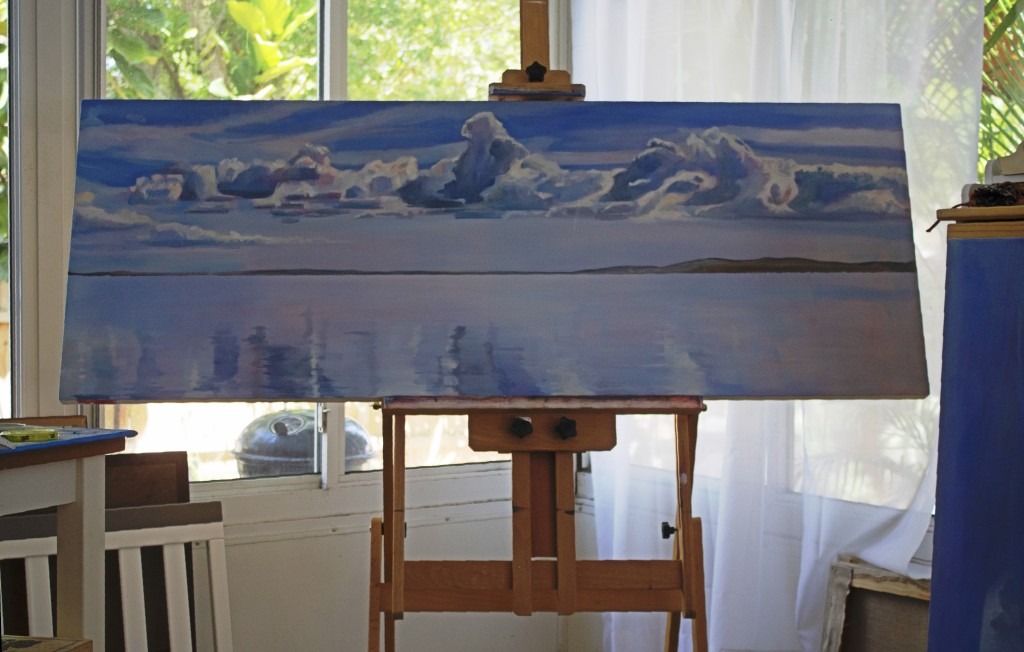 . . .
Creative Pinellas sponsored Harriet in their Co.Starters arts business training program. “It was a ten-week program, all online,” she explains. “It was so helpful connecting with other business ventures. I feel like sometimes artists are introverted and have difficulties networking.”

Standing in her artist studio, the Florida room, a large structure can be seen through backyard foliage. “My husband is almost finished,” Harriet says. It’s the new location for Bahia Studios — a place to showcase her work and meet with clients.
. . . 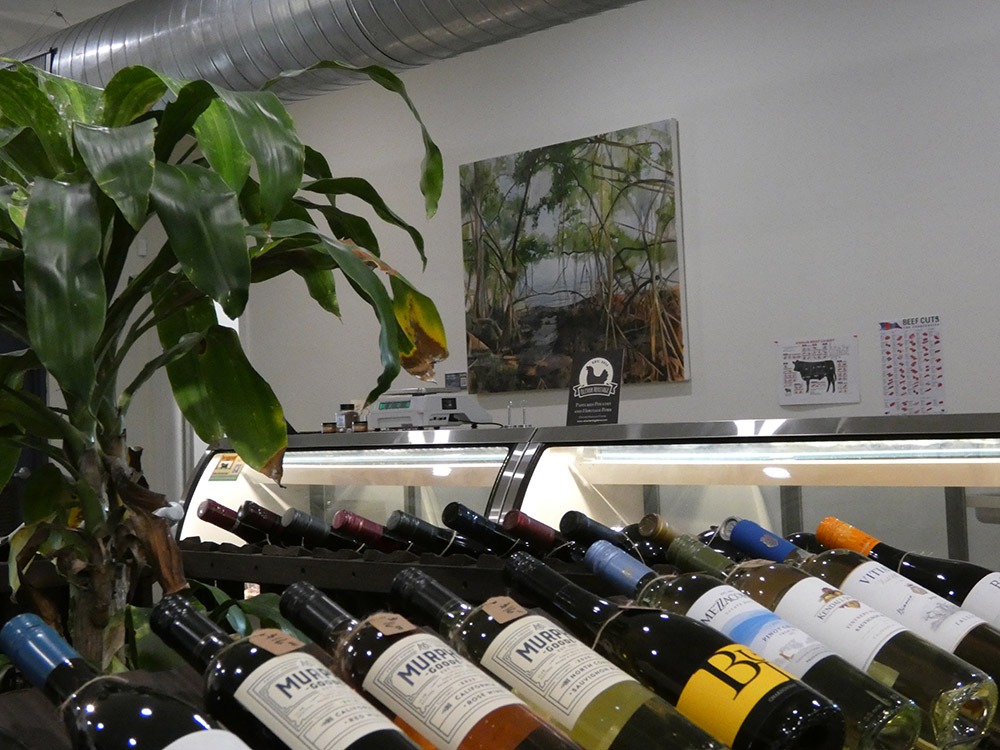 . . .
Harriet’s works are stirring interest in the city she loves so deeply. Mary Kate and John Walker, the owners of the Tides Seafood Market in downtown Safety Harbor, are some of Harriet’s biggest cheerleaders. They commissioned two of her paintings, one of high tide and one of low tide. Recently, they’ve dedicated a wall to more of her work. “They believe in me,” she says. “To have somebody believe in you . . . it’s really special.”

Experience Harriet Monzon-Aguirre’s work at the Dunedin Fine Art Center until May 16 and at the opening of the 11th Annual Art to the Rescue, benefiting the Dunedin Doggie Rescue, at Stirling Art Studios and Gallery through May 31.
. . . 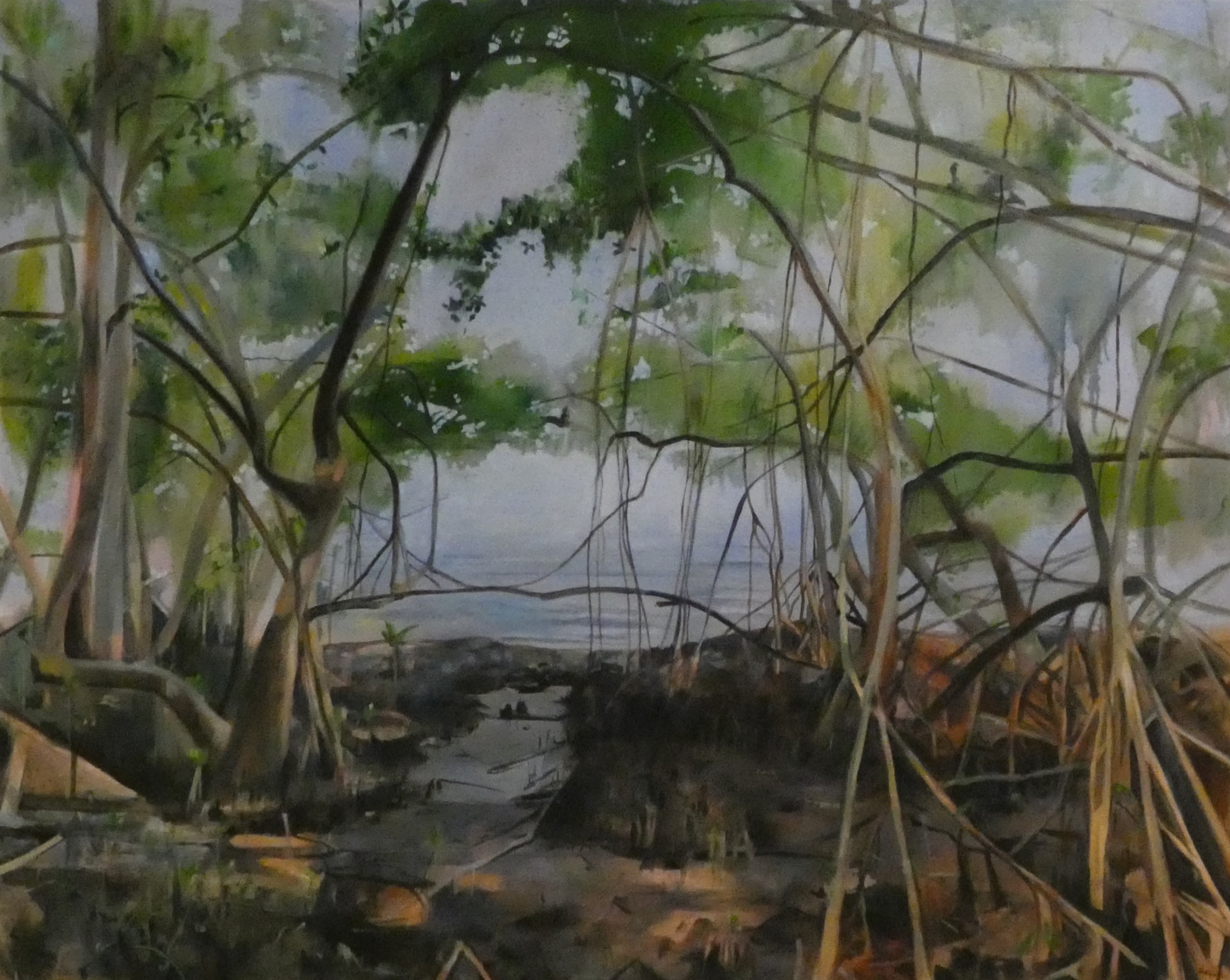