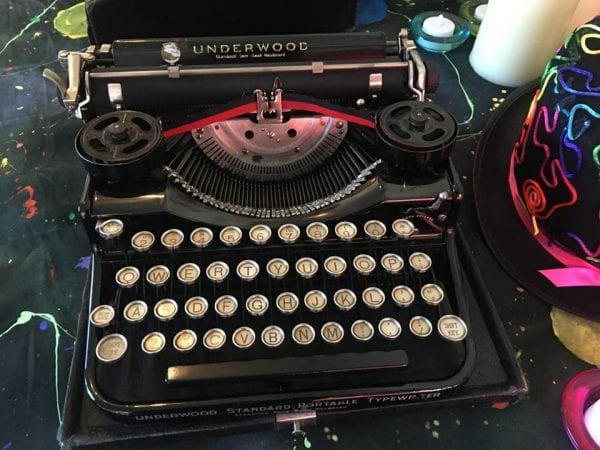 TypePoetry Taps Into An Old Way to Deliver New Verse

For years, writer and artist Ed Derkevics has traveled with his trusty vintage typewriter – well, one of the 14 in his collection – setting up pop-up poetry booths wherever he happened to be. Key West. Michigan. His hometown, Safety Harbor, either at the Safety Harbor Arts and Music Center (SHAMc) during events or at community markets in the park.

“I was basically typing small poems for people as they walked up curious about the typewriter,” he said.

Sometimes they’d offer him a theme, word or phrase. Other times, he’d ask about them, learn about their lives and write a poem on the spot.

“It was very interesting,” Derkevics said. “A lot of people were inspired by the actual typewriter. There were kids and teenagers who had never seen one before. But there were many who grew up with them and hadn’t seen one in 30 years. It brought them back and they started telling me stories about typewriters.”

He has worked with typewriters his entire life. “I’m pretty old school anyhow, with my view of life, and I feel like it’s something that should be valued and treasured.”

When writing, he prefers to write longhand in a notebook or using a typewriter. Only when he has “a finished product” ready for submission or performance does he use a computer to type it up and print it out. 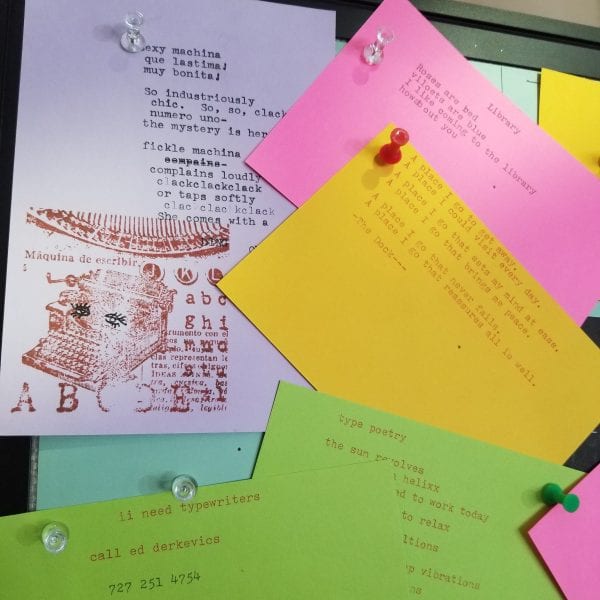 “Computers are great. I love them,” Derkevics said. “But when you’re using a typewriter, it has a way of slowing life down. You’re in the moment. To me, it’s like meditation. You are really in the moment. You have to be present. You can’t make mistakes. You have to think about it and consider every stroked. You’re transfixed in the typewriter and I love that feeling.”

So when he was approached by staff at the Safety Harbor Public Library about creating programming with typewriters, he jumped at the chance to share his passion for the vintage technology.

He created the concept for the TypePoetry Project Safety Harbor, and in early September, Derkevics set up a display for the project near the main entrance. This display includes a table and chair, an electric typewriter, index cards to type on and a cork board for typists to hang their finished pieces.

“It’s been a way overwhelming success to me,” he said. “The kids are really into it. Teenagers are really drawn to it. They have no idea what this machine is. Then, lots of people tell me their father had one of these or they remember their grandfather having one of these.”

Lisa Kothe, library director, said, “The kids have never seen a typewriter. They’ve grown up on iPads and computers, and every afternoon it’s like clickety clack, clickety clack, and it sounds so cool. I have my door open so I can hear it.”

She added, “And it’s great they’re being so creative. Writing whatever comes into their head….People get real creative and that’s what the library is for, to spark that.”

The TypePoetry display will remain up through at least Oct. 26, Derkevics said.

He and Kothe said that’s a loose end date. Likely, it will remain on display as long as it’s popular with library patrons.

“Hopefully, we go longer with this,” Derkevics said.

He has also set up a second TypePoetry display at SHAMc, where he hosts the SHAMc Alive! Open mic on the fourth Wednesday of each month.

He and writer Mary Cummings will also host a Type-In at the library Wednesday, Oct. 23, 6 to 7:30 p.m. Those attending can either bring their own or use one that he’s provided. In addition to writing on typewriters, he hopes the group will share typewriter stories.

Eventually, he’d like to compile the poems and pieces created for the TypePoetry project and publish them.

“I’ve had so much success with this it brightens my heart,” Derkevics said. “I’ve had kids who’ve come in here go buy a typewriter because they saw this. Today’s kids get so caught up in electronics and the speed of everything. This helps them slow it down.”

For more information about this project, visit facebook.com/TypePoetry.