In 2018, when I first saw a call for art issued by Pompano Beach for proposals to design a sculpture that would live at the bottom of the sea I was immediately intrigued. It was a unique opportunity to create something that would be installed in a remarkable location. I was also motivated by the idea of contributing to the artificial reef ecosystem that helps support and sustain sea life off the Florida coast. This was a chance to work on a truly environmental piece of public artwork.

I envisioned diving at the wreck and coming upon a horde of un-plundered pirate treasure. It’s a fantasy come true – a huge treasure chest full of gold coins and ingots. I immediately began designing a compelling concept image that could effectively communicate the idea to the selection committee.

After being awarded the commission in early 2019, I went to work on a series of orthographic drawings that described the chest from all sides. This sculpture was going to be more architectural than my usual subjects of animals and human figures, and I needed to clearly define all it’s dimensions before going into the complex job of fabrication. 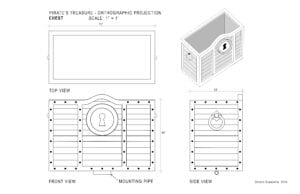 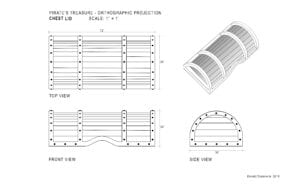 An important consideration was what the chest would be made of. It’s common knowledge that salt water Is hard on metal,  you don’t have to be a sailor to know that salt water eats through steel. That’s why I chose to create the treasure chest out of aluminum which fares much better in the caustic environment of the ocean. To help the aluminum surface further resist corrosion I applied all exposed surfaces with an industrially applied powder coating. It’s a “green technology” that is safe for the environment and doesn’t generate harmful solvents or airborne pollutants.

This dry powder is applied to the surface of aluminum using electrostatic spray deposition. A curing oven transforms the powder into a smooth, hard coating. Powder coating provides a durable finish, which reduces maintenance issues and mitigates the effects of salt water on aluminum.

The chest ended up being made of over 200 individually shaped pieces of aluminum that fit together like a giant 500-pound jigsaw puzzle. It was quite a challenging problem to create the chest to come apart so all the individual pieces could be powder coated and then put it back together again fully assembled. 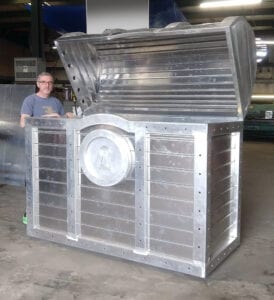 Each of the many aluminum parts were laser cut with computer precision and preliminarily fitted together before being disassembled and individually powder coated in three different colors. The chest was then reassembled and riveted into its final form.

The most challenging part of the process was creating the treasure itself. Oversized ingots were made out of a one-piece pattern and folded and welded into place. I created the mint markings on the ingots and the doubloons on Photoshop before transferring them to a cad program and etching them into the aluminum.  I wanted  them to have the look and feel of real gold treasure.

Another concern was the fact that the chest had to be installed on land for one year before being taken out to sea and attached to the Shipwreck. This meant installing anchor tabs at the bottom so it could be securely attached during its terrestrial exhibition, and designing a special device that would be used to attach it to the deck of the ship. I also had to make the lid very sturdy to avoid any damage from people possibly standing on top of it during its exhibition on the ocean front walk. 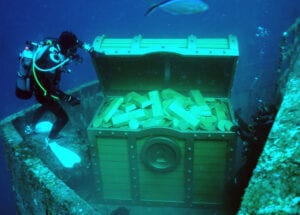 In December 2020, after a year on display, the sculpture was loaded onto a ship, taken out to sea and sunk by divers who attached it to the deck of the Lady Luck, its final resting place.

I envision the sculpture adding an element of fun and surprise to the underwater realm of Shipwreck Park, and I hope it brings joy to divers for years to come.