THE POLITICS OF ART

Hi there. It has been quite the week, hasn’t it? Welcome to my Creative Pinellas Emerging Artist blog. I was recently awarded an Emerging Artists grant and part of our responsibilities as grantees is to keep a blog. I suppose it would make sense to kick things off by introducing myself and telling you about my background and what I do but as I sit here with an end of day cocktail in hand I don’t really feel like doing that right now so if you want, head on over to my website www.gascot.com where you will find a bio, CV and samples of my work. Go ahead, I’ll wait right here. Hi again! Hope you enjoyed what you read and saw. Now that that’s out of the way let’s talk about this week. Are you happy with who’s leading? I am. And I hope for a final decision soon. If you looked at my work you know by now that I’m a loudmouthed Liberal and if you are a staunch Conservative you’re probably neither my audience nor a fan. That is perfectly OK. Art can be polarizing. As someone recently said, “It is what it is.” As we sit on pins and needles awaiting the results I am reminded of how I was able and honored to have been a part of this moment in history through art. I’ve gained a reputation for being political and addressing social issues in my work as well as on social media. Often I play with parody or satire to start a visual conversation. Perhaps because of that reputation, the League of Women Voters commissioned me to design and paint a mural about diversity in Democracy. It was initially intended to reach the LGBTQ community (of which I’m a part) but I wanted to cast a wider net. 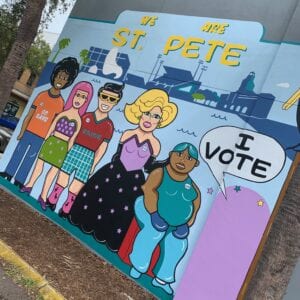 I wanted to include a range of colors, ages and genders in my mural to fully reflect St. Pete’s diversity. I knew I wanted the piece to be interactive and made it a selfie mural. You can literally insert yourself into it. I was inspired by “I Voted” stickers. I wanted to ensure the mural remains relevant so I changed what was initially a “St. Pete Votes!” banner with an “I Voted.” Comic book-style speech bubble to “We are St. Pete.” And “I Vote!”. After all, we vote all the time. Voting is ever relevant. The mural is also interactive via the free app Pixelstix. Each “Voted” sticker  the characters wear contain chips with voting resource information and a “making of” video. 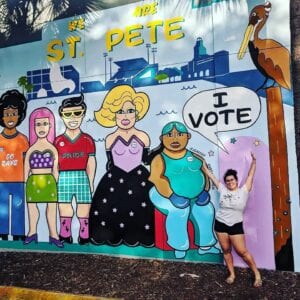 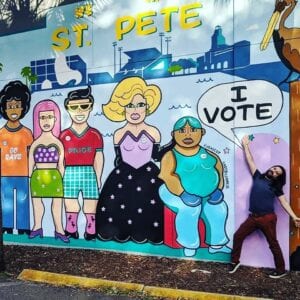 To handle the typography and assist me with the overall execution I brought in artist James Hartzell, who specializes in lettering. Be sure to check him out. From the moment the mural began to take shape the community support and excitement was overwhelming and invigorating. Passers by would give us the thumbs up, wave and often stop and talk with us about the piece and the importance of voting and progress in our country. Throughout the process we only encountered one negative experience. A man who didn’t feel included quite boisterously declared that “What we REALLY need here is an All Lives Matter Mural.” This did not go well. I proceeded to tear down his arguments while a Black mother holding on to her child stood a few feet away.  She stopped upon hearing my now raised voice and stood giving me the thumbs up. Once I saw the child I forced myself to disengage as I didn’t want her to witness any negativity. You just don’t know how out of hand these “debates” can become these days. I have a big, big mouth and can be quite passionate, to a fault about equality and equity, holding no prisoners. Anyone who follows me on social media or knows me personally knows it. 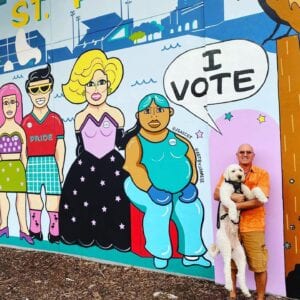 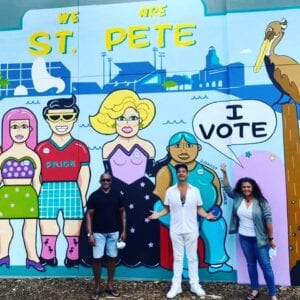 One night as we worked on the mural a caravan of “Proud Boys” counter-protestors rode by. Both James and I became heated about this hate parade and shouted a few things at them but then something occurred to me that put me at an immediate ease. I turned to James and said, “You know what? It’s OK. We don’t have to scream at them.” I realized that we were, at that very moment exercising our right to protest and denounce their bigotry in the best possible way by literally painting a mural celebrating diversity and the power of voting for progress before their eyes. I can’t think of a better way to flip a bigot off. Can you? Upon completion the mural received quite a bit of media attention and acclaim. Residents and visitors continue to express how pleased they are with a mural that encourages action and social change. Then the social posts began. I am still being tagged on social media by friends as well as complete strangers inserting themselves into the mural and proudly sharing with the world that they have and exercising their say in Democracy. It tickles me every single time. 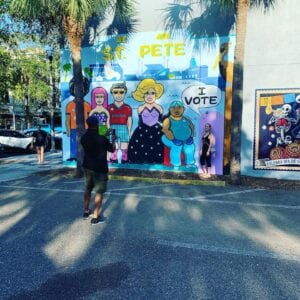 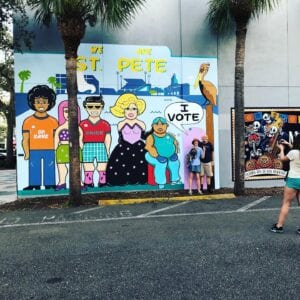