The Lean on Pete Effect 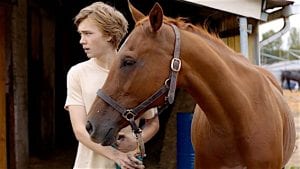 Last weekend I saw the movie LEAN ON PETE. Andrew Haigh’s moving tale of a fifteen-year-old boy and his horse, adapted from the Willy Vlautin novel of the same name, explores themes of loneliness and grief set against the stark, often brutal landscape of the new west. I found myself rooting so heavily for Charley that at one point I involuntarily folded my hands in a prayer position and then pumped my fist to urge him on. Days later I’m still thinking about the film and Charley’s hubris, a kid who is completely alone in an ugly world of poverty, violence, and homelessness. Admittedly this is the kind of gritty coming of age story (in the same vein as the Jeannette Walls memoir THE GLASS CASTLE) that I’m drawn to. Nonetheless, for me, no matter what the genre of the narrative, the single most important ingredient to the success of powerful story-telling is: do I root for this person. Because for me, no matter how flawed that individual may be, I need to be so deeply entrenched in the wants and heartbreaks of a character that I can’t help but fold my hands together and pump my fists in hopes that they get whatever it is that they’re looking for.