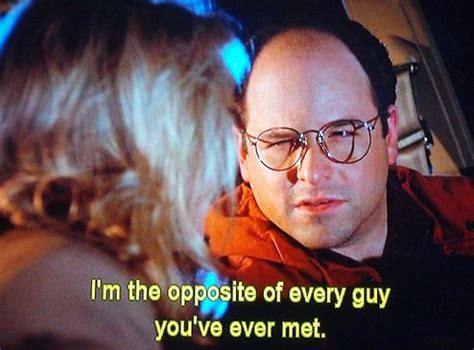 My favorite TV character of all time is George Constanza, and his greatest episode is “The Opposite.” In “The Opposite,” George a stocky, slow-witted, balding, unemployed 30-something man who lives with his parents, laments:

“Why did it all turn out like this for me? I had so much promise. I was personable, I was bright. Oh, maybe not academically speaking, but … I was perceptive. I always know when someone’s uncomfortable at a party. It became very clear to me sitting out there today, that every decision I’ve ever made, in my entire life, has been wrong. My life is the opposite of everything I want it to be. Every instinct I have, in every of life, be it something to wear, something to eat … It’s all been wrong.”

Spurred on by a form of resignation and fatalism probably common to most addicts, George decides that henceforth he will “do the opposite”—reasoning that since every impulse and intuition he has about the world is wrong, he “will do the opposite.” As he tells Jerry and Elaine at Monk’s Cafe, “I used to sit here and do nothing, and regret it for the rest of the day, so now I will do the opposite.” Following this re-birth, George goes on to get a beautiful girlfriend, a great job with the Yankees, and moves out of his parents’ house. In rehab parlance, George is now in recovery, until he next episode.

One of the gags for my fictitious rehab in Delray, modeled on the “Derek Jeter Rehab Facility Delray” (I won’t be able to use that name for legal reasons, I imagine), is for clients to watch this episode in orientation. I started thinking this was a funny gag, like giving them all dying plants in their rooms to save, but now, like George Costanza, what at first seemed vapid and asinine now seems profound. “The Opposite” is the most hopeful episode in the history of TV, and messages of hope are requisite in recovery.

If Seinfeld was a “show about nothing,” does this make my work-in-progress a “novel about nothing”? I’d be okay with that.