Recently at The Studio@620
curated by Bob Devin Jones, hung by Marcus Wehby 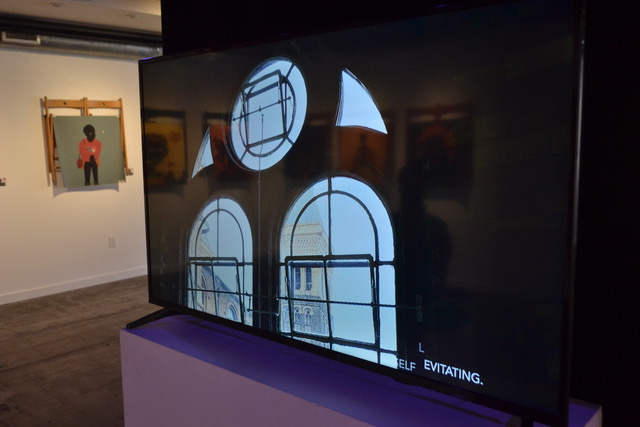 . . .
Jazz sucker punches from the Studio@620’s speakers
an invisible saxophone leads lively conversation
with the paintings and photographs on the wall.

Tenea Johnson’s installation punctuates the middle of the studio;
a short, white wall as you walk in, a perfect square 4×4 feet
just behind, a much taller wall, a nosebleed sorta fella
holding a framed piece in the middle,
with two photographs printed on foam, flanking the sides
. . . 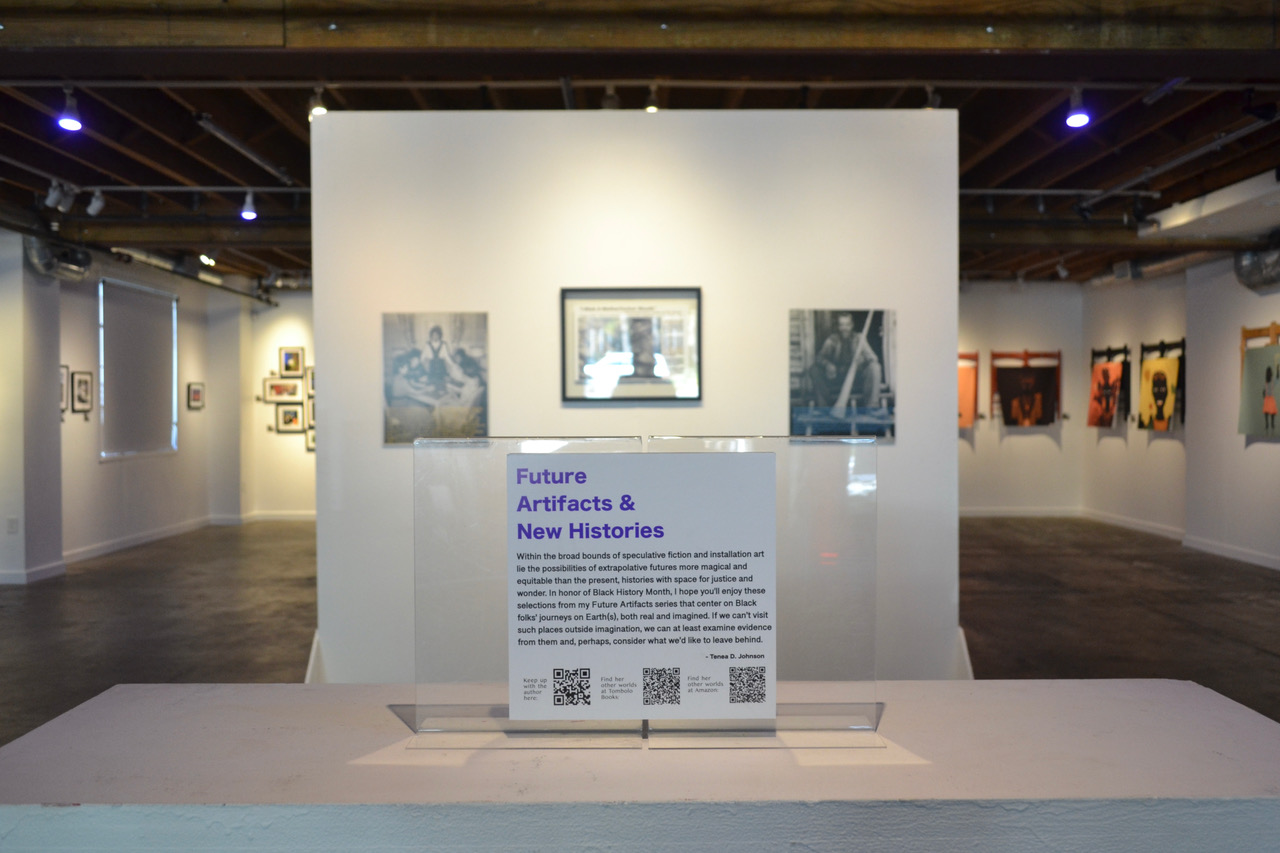 . . .
pictures from another era haunt,
whisper without moving mouths,
gossiping where there are no lips or ears
to receive rumor.

The opposite side of this wall is a similar set up. Three pieces, with a single free standing
column in the middle holding the image of a Black elder it reads:
. . . 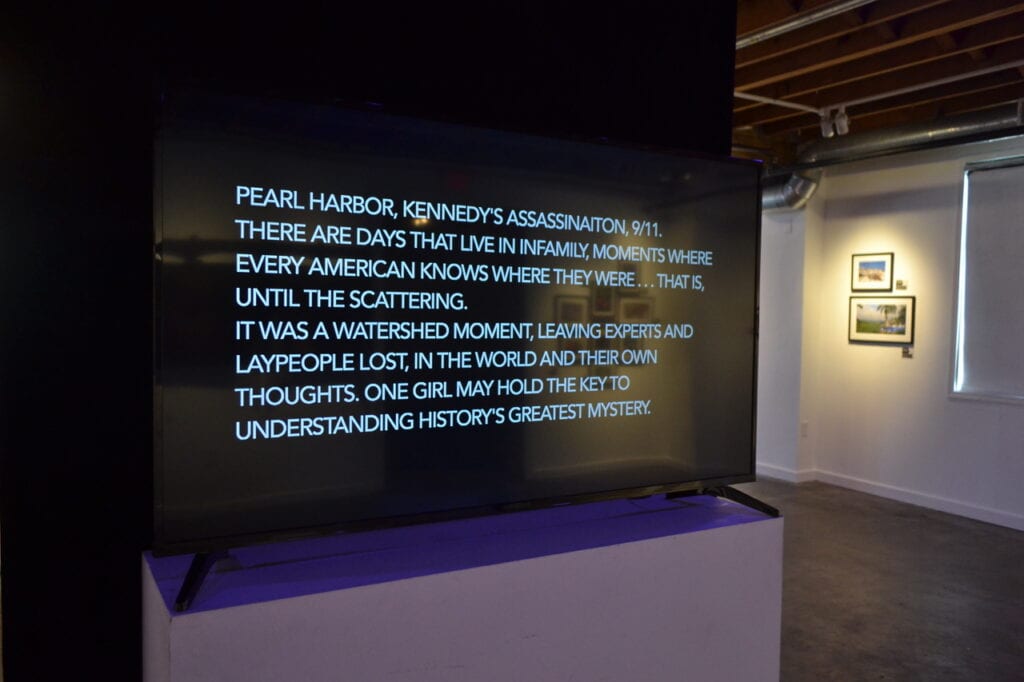 . . .
A black curtain stands beyond even this, and on the other side of that curtain, a tv screen, a portal to the story of a fourteen year old girl named, Quet Daniels, that lost her father in a Twilight Zone kind of event that reverberated around the world with a sound like when lava meets the ocean and it cracks and smothers itself under the pressure of waves and salt and insane brine. This event would be known as “The Scattering”. 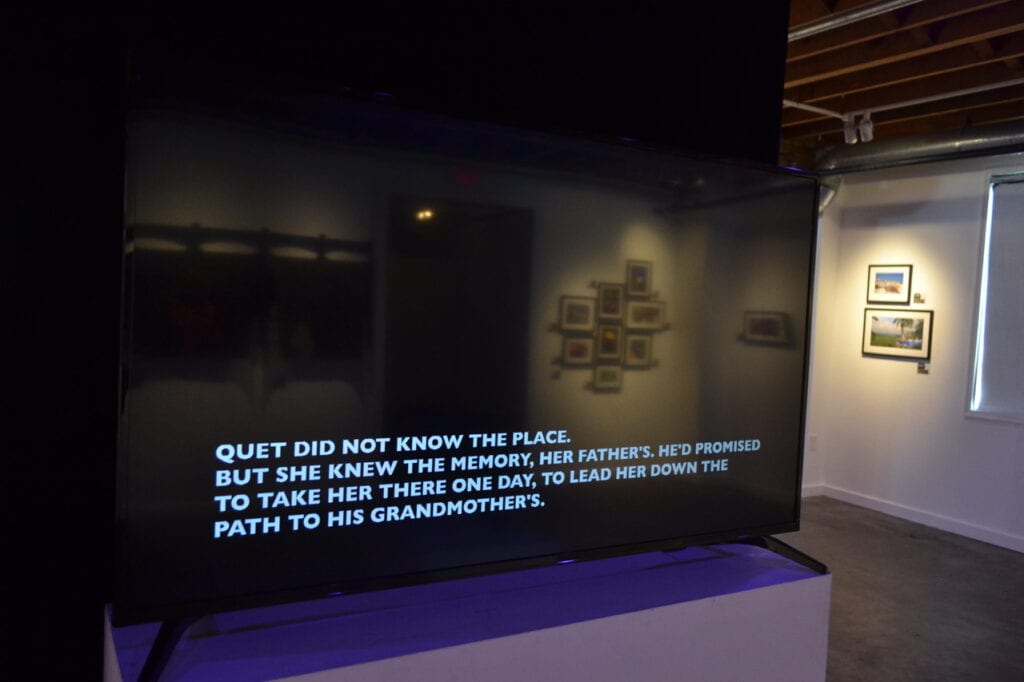 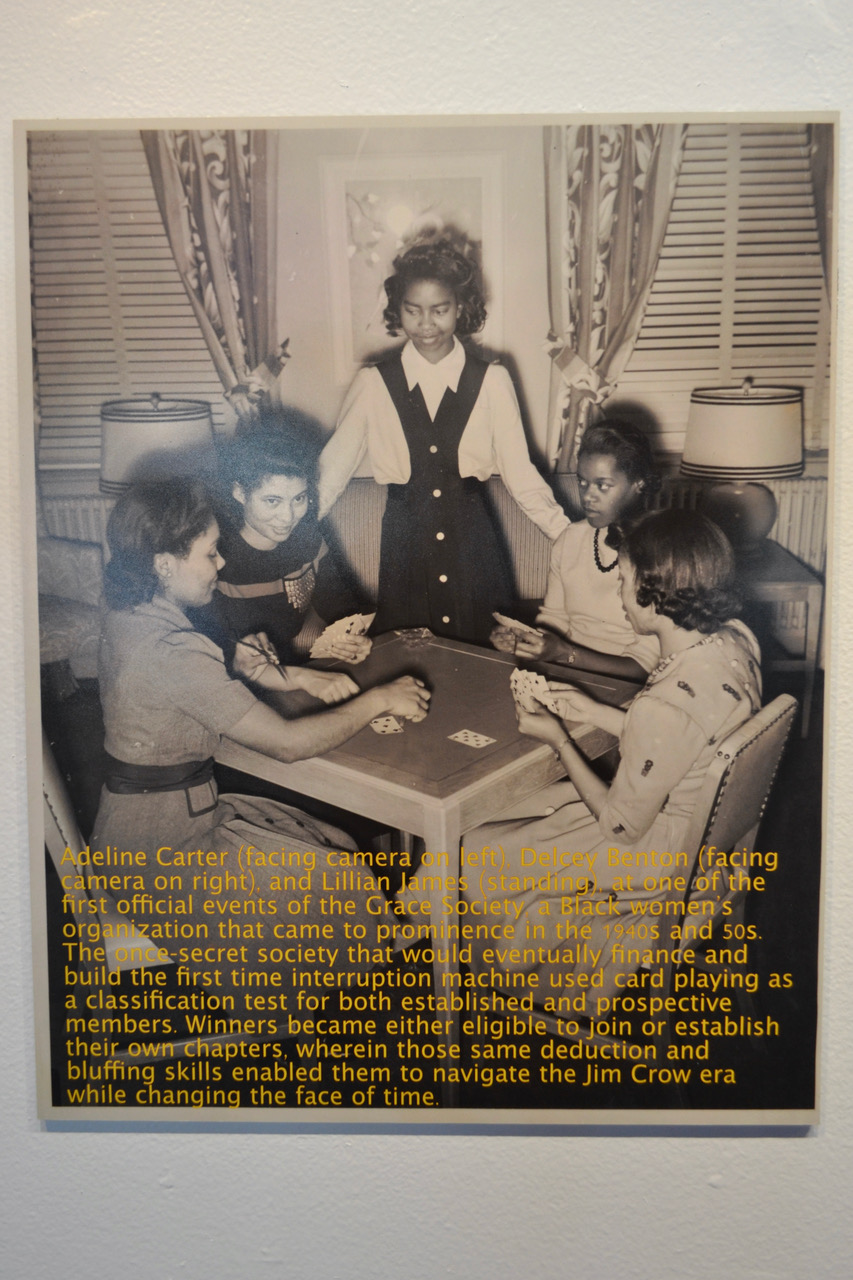 . . .
I like how haunting this photograph looks. Though, it’s likely just the effect of looking at an earlier time period through an “obsolete” and unfamiliar medium. 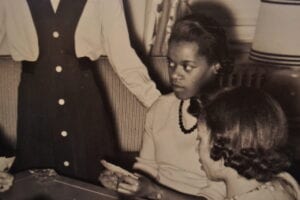 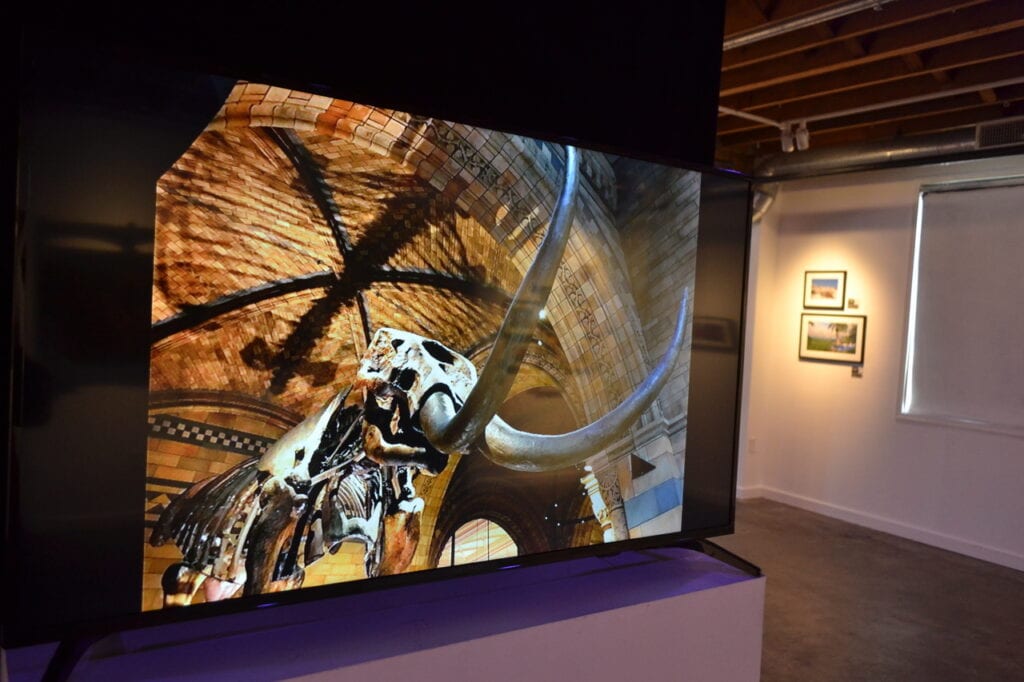 . . .
“Do you think secret societies really exist?” – a young man asked me as he walked shyly around the gallery, his feet asking the concrete where they can land. “Do you think they’re still around?”

“Why of course I do,” I replied. I fidgeted with my mask, “The fact that you and I haven’t heard of them means they’re doing a pretty good job.”
. . . 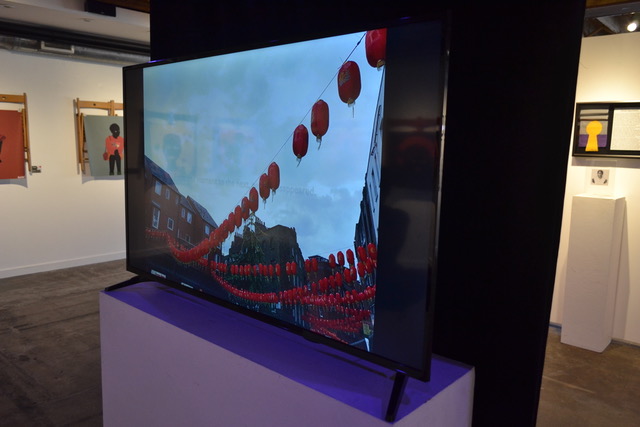 . . .
I chuckled and he looked at me sternly and actual concern set the tan table of his face. Cherry, or Hickory faced. “There have been countless forms of secret societies in virtually every country, and in the places before countries.

His look was less grave, more sure footed. A young goat, looking down at his descent, the valley beneath, uncanny, green, slippery, but manageable, workable, climbable.
. . . 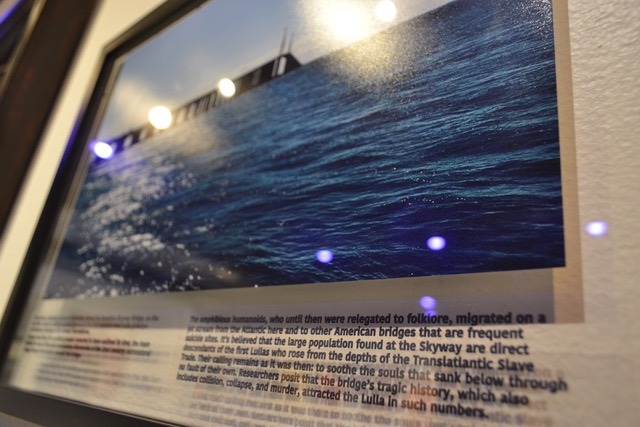 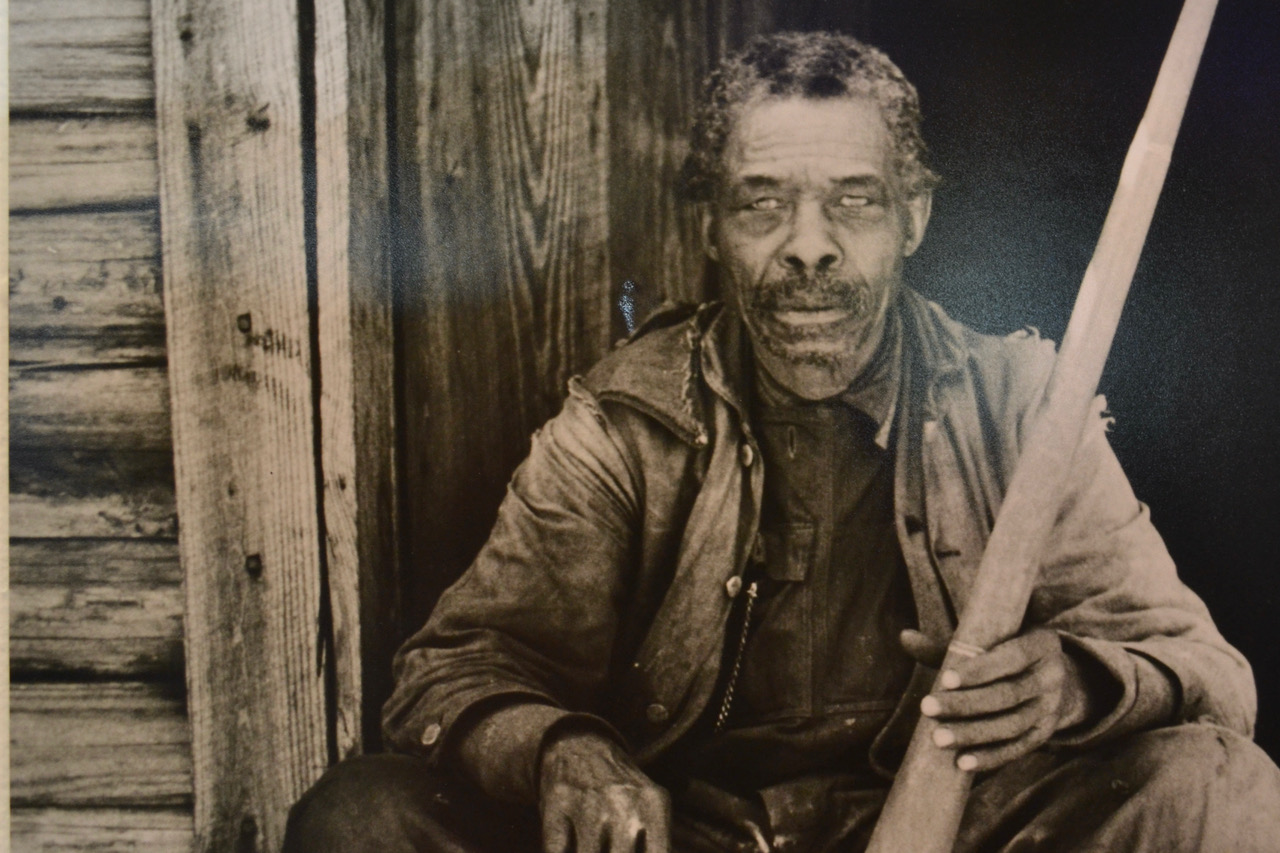 . . .
This piece shows a Black elder sitting down in an old jacket, even older pants, and scraggly facial hair you can’t tell where it stops and where his neck begins. He looks like he’s seen a million things

“Blind hope ain’t always what pulls you through — especially if you know what folks are thinking… and thinking about you.”
. . . 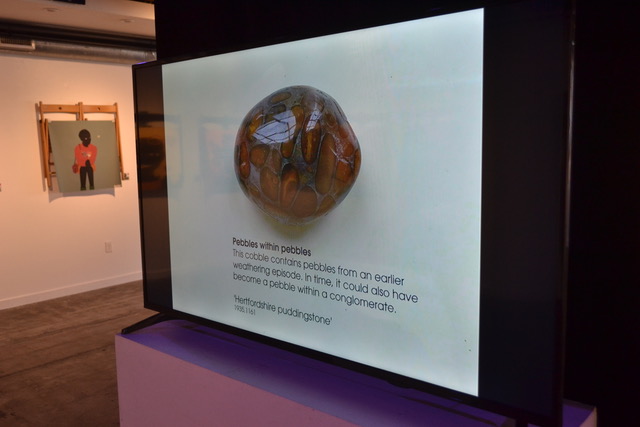 . . .
Tenea Johnson has an uncanny talent for making you doubt reality. 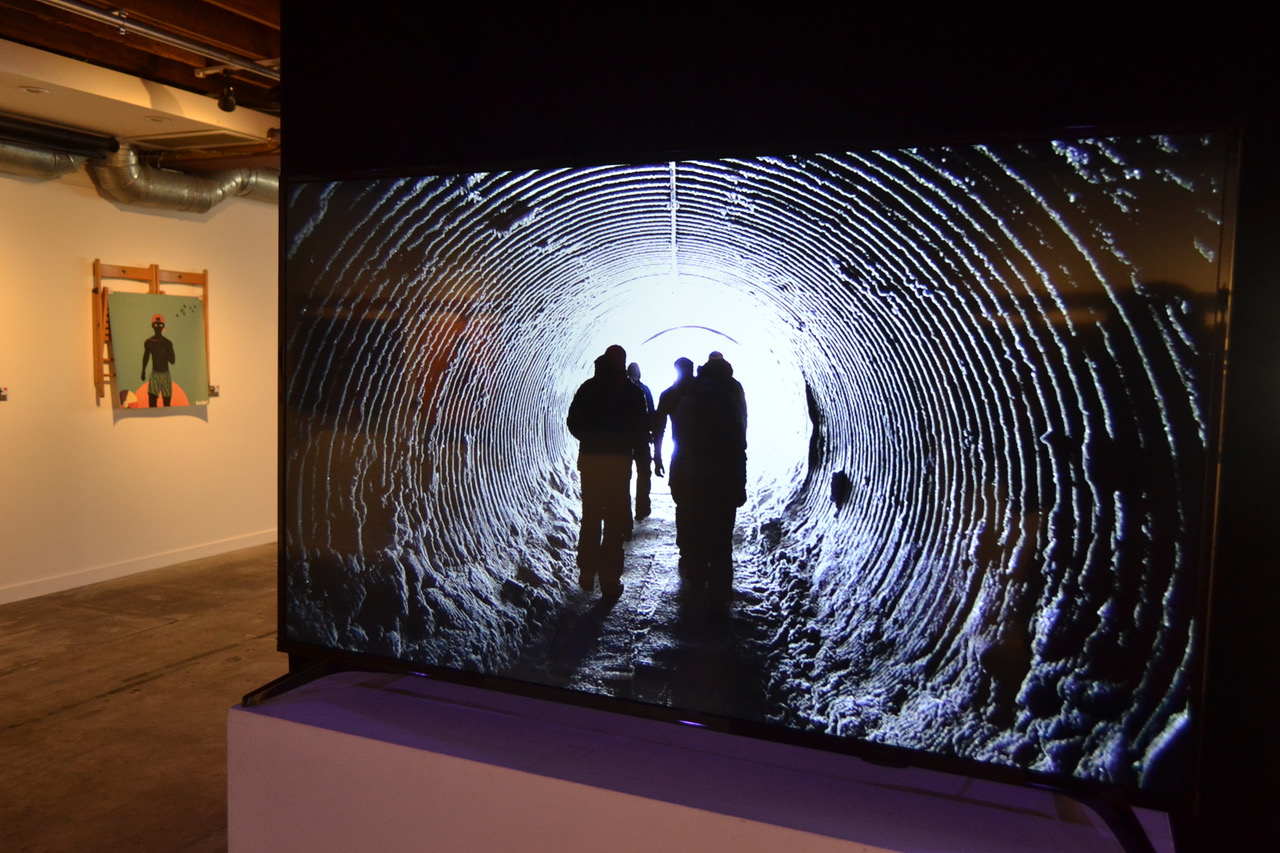 . . .
TV screens and the backs of cupboards

Like a gargoyle, her short and often spooky pieces at the Studio@620 come alive at night, aim to protect our dignity, and shroud us in a slow grace rarely allowed by text books and nosey neighbors. Tenea Johnson offers us another method to explore “Blackness” with speculative fiction, and take back what’s been stolen and hidden away into the cupboards of near absurdity.
. . . 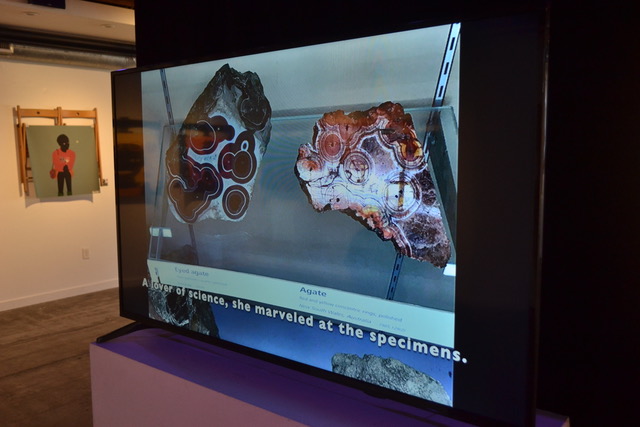 . . .
She offers a unique, time traveling experience. Her machine doesn’t buzz or hum, or strobe lights, a rupture the air. It’s as quiet as air conditioning, and as plain as branches rocking their hips in the breeze, in fact, her machine doesn’t make any sound at all.

and my scribbles swell with rushing silence and Tenea’s stories carry on whether you watch them or not, like a stream in a valley, it goes on with or without you, the stories of the enslaved, freed, escaped, secret Blacks, who digest a part of themselves to steal away, but “stealing” is as messy as my cursive writing, for, how can you steal what was already yours?
. . . 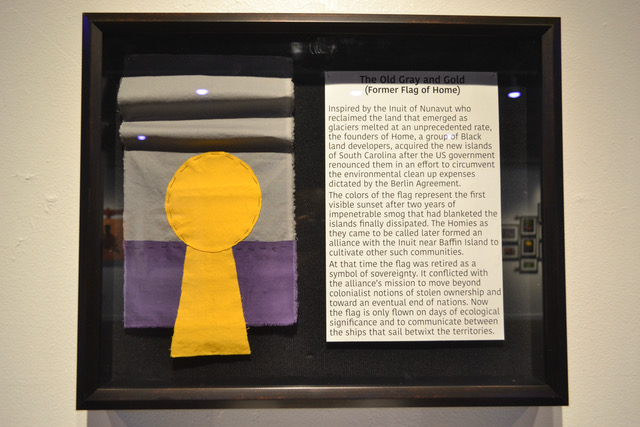 . . .
Like Robert Jones Jr. said in The Prophets, you gotta bury parts of yourself deep down where you almost forget it’s there to endure the indifferent suffering of slavery, of wage slavery, of segregation, of beatings, of lynchings, of being murdered by the police, of white people telling you to suck it up like the other immigrants, of no one caring about you and your dark brown skin but your kin. 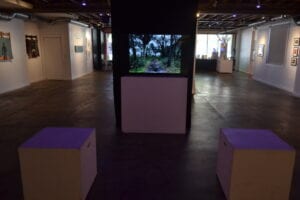 All photos by Denzel Johnson-Green
. . . 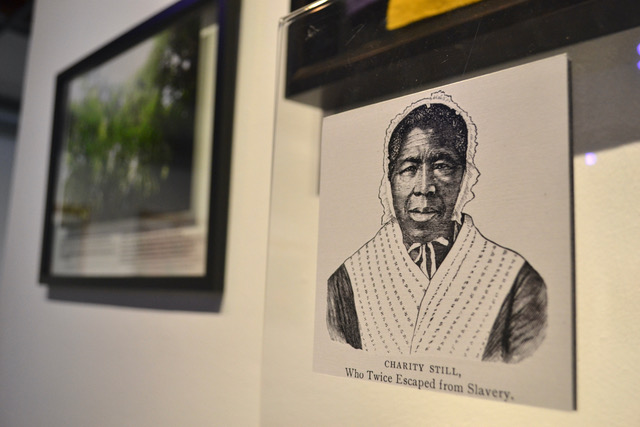