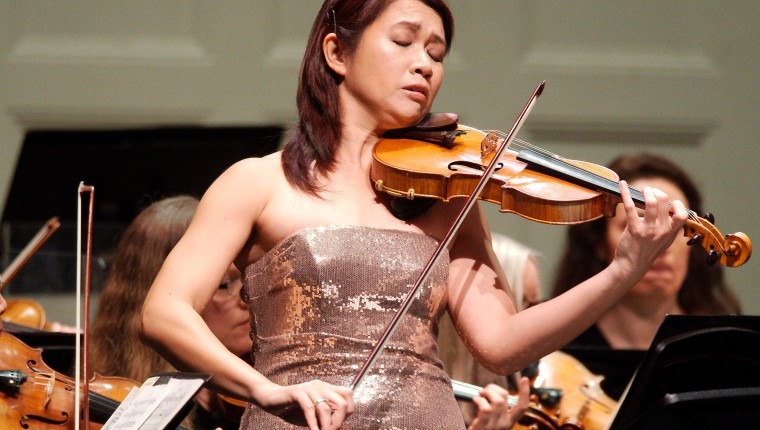 TFO violinist tunes up for
the inner challenges of playing Mozart

. . .
Nancy Chang might have the toughest job in town this week. As The Florida Orchestra’s Associate Concertmaster, she’s more than busy studying scores, rehearsing and performing with her colleagues.

But for the latest Masterworks program, she tunes up for a bigger challenge – standing in the spotlight to bring Mozart to life.

Sure, Mozart might sound easy to play, and his light and sunny Violin Concerto No. 3 – which Chang tackles in two concerts this weekend – appears deceptively laid back. Not so, the Taiwan-born musician says, because so much depth and richness percolate under the surface.

We caught up with Chang, who joined TFO in 2006, and posed a few questions on preparing and performing Mozart. She appears in between Jessie Montgomery’s Records from a Vanishing City and Ludwig van Beethoven’s Symphony No. 6.

The Third Violin Concerto is a youthful work and sounds effortless in its development. But is it simple from a performer’s perspective?

“In short, no. First of all, complicated sounding music can often be relatively easy to play, while simple sounding music can be extremely difficult. Each instrument has its own idiosyncrasies with regard to a challenge and only a seasoned player will often be able to discern the difference.
. . .

Nancy Chang performing with a small ensemble in 2020
. . .
“Someone once told me Mozart is like shopping and looking at a simple but elegant ornament on a shelf. Any flaw in the product stands out dramatically, as there’s nothing there to distract the eye. The same analogy applies to how we listen to Mozart’s music. The more advanced a musician becomes, the less likely he or she is to dismiss Mozart as ‘simple.’ ’’

Is there a lot of emphasis on clarity and precision in this piece?

“I would consider that to be an understatement! Without addressing clarity and precision first, one cannot even begin to address phrasing and musical elements, or formulate an idea as to how to convey emotion to an audience.

“Mozart’s youthful energy and optimism is apparent throughout the entire concerto. It’s one of the more consistently upbeat pieces of music he wrote.

“At the same time, the second movement features incredibly mature writing, with some of the most elegant and beautiful musical lines in the solo violin literature.’’

Each movement ends with a cadenza. Did you create your own or use cadenzas written by someone else? What do you try to accomplish in these virtuosic passages?

“I chose to use standard cadenzas, rather than write my own. There are so many great cadenzas already written for this piece by other violin virtuosos, I didn’t feel that my composition skills would likely top those. I did spend a great deal of time selecting cadenzas, trying them on almost like shoes before buying.

“I settled on the well-known Sam Franko cadenza for the first movement and the David Oistrakh cadenza for the second movement. The third movement is a combination of different people’s writing, as there are multiple shorter cadenzas.

“A cadenza is about taking the raw elements of the movement and stretching them to show some of the limits of what an instrument can do. Although these examples have been performed by many other players over the years, they are also the moments in the performance where I have absolute freedom to express myself in a unique way. I only hope my personal stamp does them justice.’’
. . .

Ana Chumachenco’s violin masterclass on Mozart’s Concerto No.3, recorded at the Verbier Festival Academy. In this clip,
Chumachenco works on the cadenzas.
. . .
How do you prepare, mentally and physically, as soloist in a concerto like this? Is there a mindset you need to be in long before the performances?

“That’s a very interesting question. Obviously, in my role as associate concertmaster, I play solos from a seated position within the orchestra – but it’s very different to stand up and play a full concerto. The practice and mental preparation both take place over many months.

“I do have to say, having a one-year-old toddler at home climbing on me while attempting to practice, has added an entirely different level of challenge to the undertaking! Much of the technical process is generating muscle memory, and the more of the art form one can commit to that, the more secure he or she feels on performance day.

“It’s especially gratifying to play as a soloist in front of friends and colleagues. It feels like home. Of course, saying a little prayer prior to walking out doesn’t hurt, either.’’

And what do you hope to convey to your audience?

“I just want them to sit back, relax and enjoy the great music. In the end, I believe the message of music does not need to be something concrete. It only needs to evoke a feeling, a memory or introspection.’’
. . .

The Florida Orchestra
Works by Montgomery, Mozart and Beethoven

. . .
This story originally appeared on The Florida Orchestra website.