Taking the Next Step

There’s a lot swirling around in my head this Friday afternoon. Maybe because it was a big week. A big couple of weeks, actually. Yesterday marked one year since the COVID shutdowns began. Yesterday I received my first vaccine shot. As I write this, my right arm is aching and my heart is pumping with hope. Last week, I attended Jobsite Theater’s hilarious Hand to God, the first live indoor show I’ve seen since the shut down. This week, I got news that a play I’ve been developing for over a year, Tanya’s LIT CLIT, received a major grant and that another play I was supposed to assist on last spring (which was canceled almost one year ago) is tentatively rescheduled for the fall.

All this to say, it’s stirring up A LOT of feelings. Working virtually this past year has allowed me to connect with people, artists and companies across the country in a way I never imagined possible. The accessibility opened by going online or mailing work out to a broader audience is frankly miraculous. I also ache to be back in a rehearsal room with people making theater. And I am also scared to return.

Who am I now? How am I now? How do we come back together from this? There were hurdles to working in this industry that felt like a steep upward climb even before the pandemic hit. Scarcity, nepotism, elitism, racism…the list goes on. There are moments when I feel like I am starting from zero again. But I have to remind myself that my community will hold me up. I have to remind myself that I am loved, that we are all starting again and that we have all been, irrevocably, changed.

This morning, a good friend forwarded me a quote from playwright/actor, Tracy Letts, who was interviewed amongst 75 artists in the NY Times article, 7 Questions 75 Artists 1 Very Bad Year. When asked, “What’s one thing you made this year?” he said the following:

“I’ve made nothing. On four separate occasions, I arranged my schedule with [my wife] Carrie so I could have six uninterrupted hours a day to write. All four times, I emerged from my office after two or three weeks, rattled, defeated, feeling lousy about myself. My wife finally said, “Here’s what you have to do: read books, watch movies, cook dinner and take care of our boy.” That is what I’ve done. And while my family is my focus and my joy, from a creative standpoint, this year for me has been a dust storm. I’m normally involved in a number of creative endeavors, in different forms, but the theater is my lifeblood and I don’t know who I am without it. The plug getting pulled on “The Minutes” was truly devastating for me. I feel like a heel even saying that since so many people in this country and around the world are suffering as a result of this pandemic in ways I can’t even fathom. But it’s the simple truth. I can’t do the computer theater, it’s too depressing for me, and I’ve turned down a couple of on-camera jobs because I am just as scared of this virus as I was a year ago. Creatively, I’m lost. It’s why I’m doing this interview. I’m guessing there are some other artists who identify.”

I share this because Tracy Letts gives voice to what so many of us working in the theater industry have experienced this year. His frustration is honest. If you haven’t made anything this year, that is ok. There is bravery in just trying to survive.

Being forced to slow down and to find who and how I am when I cannot do the art form that largely forms the basis of my identity, I had to reassess what mattered to me and develop a new relationship to myself. And, despite it all, I wouldn’t go back. I will try to walk forward holding space for this complexity and contradiction to exist in me and those around me. That is the only way I know how to take this next step. 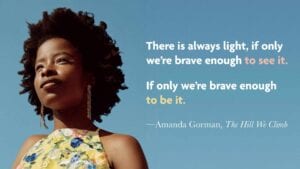