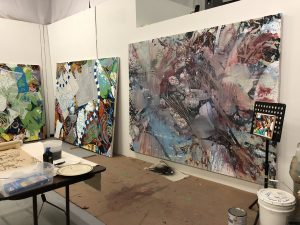 This past week I met with Kirk for the second time, only this time I went to his studio in Seminole Heights. We planned on gallery hopping after hanging out in his studio since it was First Friday in Tampa. Just like last time, hanging out with Kirk was filled with more warmth, ease, and fun than I expected. We talked for an hour or so about his work and past shows: what he had down in the Tampa Bay area and abroad, his time in NYC in the early 90’s with his artist friends, movies, and his students. His studio is huge! And gorgeous. Walking in I drooled at his high ceilings and, surprise, actually good ventilation and AC! He owns the whole building attached and rents out some spots to a dance studio, which I thought was really cool. It’s that kind of DIY, blue collar pragmatism and optimism that’s part of what attracted me to the art scene in the Tampa Bay area, and I wish even more people would implement that sensibility.

In fact, that’s a lot of what we talked about after we saw the shows at Quaid, Tempus, and Cunsthaus. As great as those shows and spaces were, and as proud as we are for them being in Tampa Bay, they shouldn’t be the only spaces like that. There should be 8 “Tempus Projects” and a dozen “Quaid” galleries. Garages, spare rooms in houses, carports, condominium shared spaces, patios – FL is plentiful with these kinds of spaces and they should be used for art shows, film screening, lectures, sit-ins, BBQs, anything that causes strangers to come to be together. Kirk totally agreed, and after some very cool flattery, he said that he would love for me to curate a few shows in his studio. Apparently he’s been wanting to turn his studio space into an alternative art space for a while. He doesn’t want to worry about commercialism like selling work or pleasing collectors. He wants to make shows that people will talk about, think about, make shows responding to (for or against). I’m still thinking about how flattered I am that, after knowing me for less than ten hours, this cool, successful, local artist wants me to basically turn his studio inside out. I happily accept the offer, though. 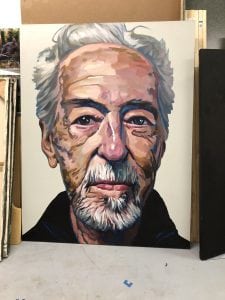 We also talked a lot about his longtime friend and colleague, Theo Wujcik. Theo died a few years ago, and above is a portrait Kirk made of him. Theo was a local artist in Tampa for decades. He was good friends with Rauschenberg and Ruscha and used to hang out with Kirk a lot. I’m a little embarrassed to admit I didn’t know anything about him before. Apparently Theo would call Kirk after 1am (when he knew Kirk was finishing up in his studio) and ask if he could come over and just hang out. Seeing Kirk speak so fondly but not hyperbolic about his friend, I remembered how important mentor-student and peer-peer relationships are in the arts. Maybe the most important thing. Sometimes that’s lost in the hustle and bustle of life, or careerist, myopic impulses. I’m proud to constantly remind myself of how important these relationships are, and grateful that I get to have one with an artist like Kirk.

Also, shout out to his painting of Obama that made it on the cover of Politico Magazine. 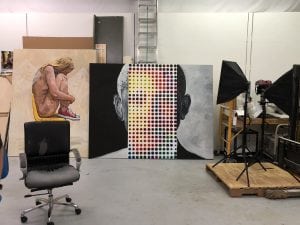