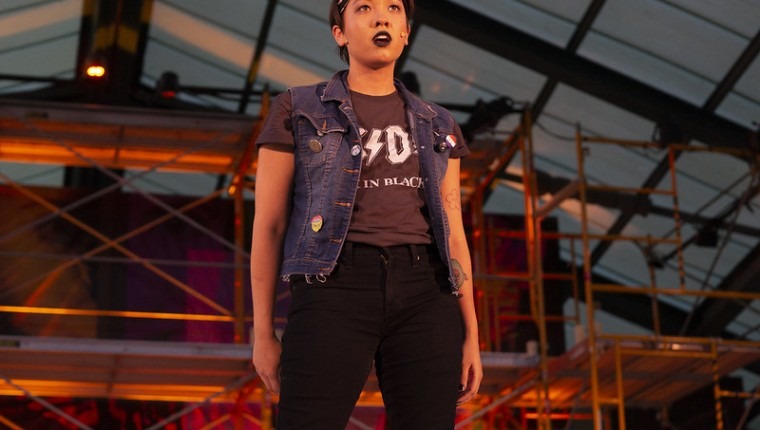 L. Peter Callender – actor, director, playwright and artistic director of San Francisco’s African American Shakespeare Company – shares his thoughts on directing a brand new rendition of a classic play for American Stage. . .  Romeo and Juliet in America: The One With The Happy Ending.

“It was a challenge, and I like a challenge like that. We’ve seen Romeo and Juliet done in so many different ways, from musicals to movies, and they’ve taken lines out and put lines in and tried to make it ‘more comfortable’ for audiences young and old.

“I’ve even directed it with age-appropriate 14-year-olds at my theatre company – as it’s written – and audiences told me, ‘That’s the first time I really understood Romeo and Juliet.’ When you see it with young teenagers and know that the whole play takes place in just 2-3 days, it all makes sense.”

For American Stage’s return to in-person performances, they didn’t want a tragedy. “So with that mandate, as I read the play over and over again – what registered for me is that the word ‘dream’ is repeated so many times in the play. And I took that as my hint, to make this happy ending work. And after that, it became easy.

“98% of the words are all Shakespeare. I was even able to take some lines I cut from Romeo and give them to Juliet. Romeo has some lines about, ‘When I slept, I thought my love came and kissed me’ – so I gave those to Juliet. And I actually have some lines from the Prologue that I put at the end of the play.

Romeo: “If I may trust the flattering truth of sleep,
Your dreams presage some joyful news at hand.”

Friar: “Where be these enemies? Capulet and Montague–
See what a scourge is laid upon your hate
That heaven finds means to kill your hate with love.”

“What made this play so special was when I was watching the show on Friday, right behind me was a little Black girl and her mother. And as we watched the play, I kept looking over my shoulder – this girl was maybe 5 or 6 years old, and she was watching so intently. “And she got it. She really got it. When Juliet woke up, this young girl gasped and looked at me and said, ‘It’s all a dream. She had a bad dream!’

“It’s outdoors, it’s in a park, we’re out there rehearsing and it’s hot as all get out, and people are walking around. And there’s two little boys and their mom outside the fence and this one boy is watching us. I thought he’d be there for a couple minutes – I mean, it’s Shakespeare – but he stayed for half an hour, absolutely glued.

“There are lots of kids who come to see the play and I watch them, they’re riveted.”

As part of American Stage’s ongoing accessibility and Next Generation initiatives, anyone under 20 years of age can watch the show for free. Callender is back in California now, preparing for the African American Shakespeare Company’s upcoming season – a rollicking Complete Works
of William Shakespeare (Abridged), a holiday Cinderella, The Glass Menagerie and what’s sure to be a riveting  Richard II. His original play
about families struggling with reconciliation in poet-apartheid South Africa, Strange Courtesies, will celebrate its first onstage production at San Jose Stage after their virtual premiere this year.