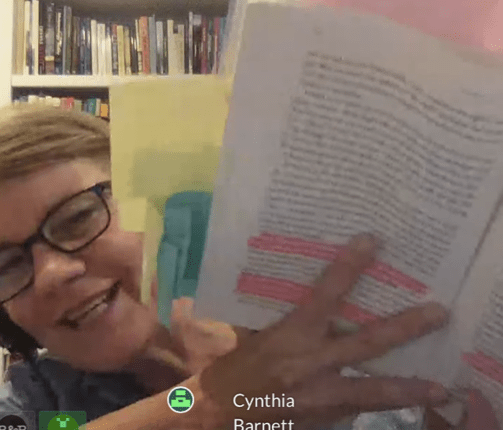 and The Sound of the Sea

This month I attended three book talks by Cynthia Barnett, author of The Sound of the Sea: Seashells and the Fate of the Oceans, just published by Norton.

The first was an in-person talk, entitled “Marveling at Nature,” held July 11 at Tampa Bay Watch in Tierra Verde. The two other talks were virtual talks.

The next day Tombolo Books of St. Petersburg offered “Sound of the Sea: Seashells, the Gulf and the Writing Life” online. This time Floridan historian Jack E. Davis, the author of The Gulf, took on the role of interviewer. That session is posted here.

At the in-person event there was a slide presentation (including Botticelli’s Birth of Venus with the goddess on a giant scallop shell), a fabulous view of Tampa Bay, wine for sale by St. Pete’s Book+Bottle bookstore and — finally after more than a year of lockdown — a roomful of people talking face-to-face.

At the virtual meet-ups, there were people in squares talking to each other, no wine, no water views and no slides. There was, however, the chance to catch a glimpse of Barnett’s bookcases in her Gainesville home (where she lives with her husband and their two teenagers), an impromptu one-woman conch concert by Staletovitch (following a request in the chat by a friend who knew she had a conch shell trumpet in her Miami study) and a brief barking commentary provided by Davis’ dog in his residence just outside Gainesville.

Davis, who teaches environmental history and sustainability studies at the University of Florida, and Barnett, are both book authors. Davis’ book, The Gulf: The Making of an American Sea, won the Pulitzer Prize in 2018.  Barnett has written three books about water-related issues. The Sound of the Sea completes, as Barnett likes to put it, her “hydroponic order.”

Of course, the online sessions couldn’t hope to compete with the setting of Barnett’s in-person Tampa Bay event. What better place to hear a talk about the need to save our oceans than at Tampa Bay Watch? The striking blue and white building that houses the nonprofit organization, dedicated to protection and restoration of our local estuary, sits on Pinellas Bayway South in Tierra Verde, providing spectacular views of the Bay.

The talk was held in the building’s second-floor Bay View Community Center. At the back is a balcony that overlooks a dock and a wide water view stretching to the horizon. I stepped out to peer down on the sparkling waters of the Bay, grateful that I didn’t see any dead fish or get a whiff of any of the red tide bloom that had been stinking up the Bay that week.

Behind me the room was filling up with people, most of them lined up to buy a copy of Barnett’s book and a glass of wine sold by Terra Dunham of Book+Bottle, a St. Petersburg bookstore that stocks both. Dunham was returning $2 back to Tampa Bay Watch for each book sold.

When I stepped back into the room, Peter Clark, founder and president of Tampa Bay Watch, was giving a shout out to writers in the room, including Gary Mormino, a Florida historian who has several books under his belt. Steve Seibert, former executive director of Florida Humanities, then introduced Cynthia Barnett as an international author with Florida roots (she’s a fifth generation Floridian). She is, he said, quoting the Boston Globe, “part journalist, part mom, part historian, part optimist.” Seibert and his wife Jeana were listed as sponsors of the event along with the Southern Alliance for Clean Energy, Tampa Bay Watch and Book+Bottle bookstore.

For her talk Barnett told lots of engaging stories about shells. How her daughter became obsessive about collecting them when she was five, a practice that dates back to the Neanderthals. How cowrie shells, the first global currency, were used during the African slave trade (an estimated one-third of enslaved people were paid for with the tiny white shells). She talked about the origins of the Shell Oil Company and the pioneering work being done by a number of largely unsung female marine scientists.

At the end of the talk she fielded questions and answers from the audience about red tide and the ethics of collecting sea shells (she’s in favor, but only in moderation), often yielding the floor to Steve Geiger, a research scientist from the Florida Fish and Wildlife Conservation Commission who specializes in mollusks.

I learned a lot about seashells from her at the in-person talk, but I learned even more during her one-on-one conversations online.

I learned, for example, that not all mollusks are seashells. Snails in our gardens are mollusks. Mollusks are the second largest group of animals in the world behind insects. They are all over land as well as the sea. But in The Sound of the Sea, Barnett writes exclusively about marine mollusks. That is, shells.

In the book she concentrates on 12 iconic marine mollusks, choosing among the more than 50,000 species identified by scientists. She chose these particular seashells — including the cowrie shell, the bay scallop and the conch shell — because they allowed her to tell both a story of human history and the impact of climate change.

The in-person talk was like sitting in a classroom listening to a lively and interesting teacher. The online sessions, on the other hand, were more intimate, quirky affairs that felt more like sitting in a living room eavesdropping on a conversation between good friends.

Both Staletovitch and Davis are writers themselves, so they naturally talked with Barnett at length about her writing process, something missing from the in-person presentation. Barnett humorously described to both of them the many false starts she had with this project, including an attempt to start the book with a story about marble and Michelangelo (marble being an all-natural stone that was formed by limestone which itself was originally formed by seashells). Eventually she was forced to abandon that ponderous opening and ended up simply starting the book by telling the personal story about her daughter collecting seashells instead, imagining that the first seashell collector was also a little five-year-old girl.

“Seashells are a home and they are a metaphor for our home, the Earth and what’s happening to our home,” she told Davis to whom she admitted that “this was my hardest book to write. It took six years to finish.”

Since the book’s launch on July 6 at Third House Books in Gainesville, Barnett has given an exhausting seven talks, something that certainly couldn’t have happened if some of them were not virtual. In addition to the three I attended, she held in-person appearances at the Story and Song Bookstore in Amelia Island and at a church on Nantucket in Massachusetts as well as virtual talks at Point Reyes Books in California and via the Orlando library system (along with other Florida authors Tyler Gillespie and Craig Pittman). Her upcoming appearances are a mixture of both in-person and online, including one with Warwick’s in La Jolla, California, that you can watch on Facebook Live on August 5 at 7 pm our time. (See Sidebar for more Upcoming In-Person and Virtual Book Talks).

So which is better? An in-person book talk or a virtual one? Which one is the more pleasant and informative experience?

Personally I welcome the return of in-person books talks, but I confess I am still hoping authors continue to include online sessions as part of their book tours.