As the figurative dust from Hurricane Irma settles, some arts venues are still dealing with damage in Tampa Bay, depending on where on the storm’s wobbly, zigzag path touched land. Now that the electricity is back on, it’s time to revisit Wearable Art 13, which showcased the best of innovative design at the Dunedin Fine Art Center on Aug. 26, 2017.

I had no idea what awaited me as I entered the bustling pre-party festivities. A musical duo from the band Spy on the LandäóîPeter Mongaya on guitar and Guianna Brantley on vocalsäóîplayed in the background.

Dunedin Fine Art Center President and CEO George Ann Bissett quickly took me under her wing and started introducing me to and pointing out various artists, influencers, and other movers and shakers. Dunedin Mayor Julie Bujalski said Wearable Art is “the greatest event in the city because it provides art for all ages, from 20- to 70-year-olds. It brings us all together.” With a recommendation like this, my excitement grew exponentially.

Ms. Bissett invited me into the VIP area, where I mingled with designers, models, and die-hard supporters. Aaron Fodiman of Tampa Bay Magazine said, “Wearable Art contributes a vibe that’s so different from everyone’s perception about art. Art isn’t stuffy and boring. This is art, and it’s fun. Also, designers are freer to go farther at this event.”

After my VIP experience, I visited the Gamble Family Gallery, which was full of hands-on, interactive art installations, including wigs and other head- and hairpieces of different materials, like foam, balloons, and synthetic hair. People were delighted by the display, as evidenced by the profusion of selfies.

Soon we all made our way to the main event. A little rain didn’t damper the collective spirit. The excitement was tangible. I had excellent seats in the press area at the foot of the runway and was extremely excited to see this spectacle of art and fashion come to life before my eyes.

Lina Teixeira‘s collection opened the show with a bold mixture of racial, ethnic, and lifestyle stereotypes and imagery, including BDSM, biker burlesque, DIY punk, African culture, Hispanic culture, and Native American culture. Some of the most memorable looks included a faux fur covered man wearing harem pants; a bullfighting couple performing a sexy toe-to-toe dance; and an African queen adorned in reds, greens, and golds. Three models wore Native American headdresses; one wore a dramatic tear-off that revealed a catsuit reminiscent and worthy of Cher. It felt as though the entire collection attempted to use stereotypes to celebrate diversity and break down taboos but fell short, placing it squarely in the impressive-clothing-and-beautiful-models-but-borderline-offensive category.

Melissa Dolce‘s work was next with a powerful, cohesive collection that mixed cocktail dresses with ball gowns, caged structures with floral embellishments, and invoked archetypes of good, evil, royalty, and things between. Some standout pieces included an opening red rose embellished gown and a delicate ivory floral cocktail dress, recalling fairy tale figures Rose White and Rose Red and two black leather (or leatherette) structural rock-n-roll inspired pieces. This collection ended with a prom queen and king, an angel and devil, then a crowned lady in blue, perhaps Persephone. The overall feeling was that of myths come to life, like the faces of a Tarot deck.

Irina Bilka made her couturier debut next with a collection called Hair Couture. Each model wore a platinum bob with bangs, which makes sense because Bilka is a renowned hair stylist. She appeared to be trying to downplay hair as an element in the show. However, hair was still the star because she used it as material in her handwoven collection. The standout pieces were a cherry red cocktail dress with an intricately braided corset and a flowing knee-length skirt and a black and gray barely there minidress. Bilka then modeled in her own show wearing her Hair Couture wings, a large hot pink to platinum ombre construction, on her back. A great showing from a new designer.

This is the Garden Fairies‘ sixth showing at Wearable Art and one not to be soon forgotten. The collective’s “Carnival of Cats in HeatäóîHot & Pink” stunned with a mechanical mouse and an acrobatic interpretative dancer opener, followed by a nonstop parade of color, movement, and joy. My otherwise copious note-taking was interrupted during the Carnivale-esque fruity and floral headdresses, stilts, neon, body paint, flags, flags, streamers, and, above all, lots of cats. When the Garden Fairies gathered at the foot of the runway after the walk, their glee was palpable. This show was pure beauty and a sheer success. Lead designers included Demeree Barth, Bonnie Bowman, Adrianne Butler, Judy Ginader, Terri Gray, Siobhan Nehin, and Beth Warmath. Body painting was done by Shannon O’Leary-Beck, Lynne Golden, Deanna Gray, and Beth Warmath.

Julian Hartzog, nicknamed the “metal man,” worked with mirrored sterling silver in 2016 and in 2017 switched to all aluminum and bright automobile paint. Hartzog’s collection reflected a classic beach pinup look with a sci-fi twist. Models surfed and shimmied their way down the runway to surfer tunes wearing bikinis reminiscent of classic cars, with visors and sunglasses to match. The star of the show was the red femme bot, a masked alien creature (or was it a hood ornament) with wings (or were they fins?) in go-go boots who seemed to control the beach babes. This show was a true crowd pleaser.

Next down the runway was a compact three-piece collection by Dacota Maphis. With an enormous United States flag on the background screen and each model carrying a tiny U.S. flag, the message seemed to be one of patriotism, which was reinforced with salutes at the end of the runway. Each of the three models was of a different racial background, presumably representing diversity and inclusion, and wearing couture mirroring their complexions. The white model was wearing a white wig and white outfit; the brown model was wearing tan clothing; and the black model was wearing black and gray clothing. It was a bit on the nose; alternately, any deeper social or cultural message or critique completely escaped me. Either way, the clothing was interesting, especially the tan ensemble with gold trim and a chain train in the back.

Johnson Hunt‘s collection hit the runway next. A notable feature of Hunt’s work is how flowers engaged with the human figure in whimsical and comical ways. Models draped in shiny gauze strutted their often full-figured stuff, a nice reprieve from the less than representative figures of their predecessors. The standout pieces of this collection were a silky green bodice and white petaled skirt with a bag that transformed into a mossy throw, and a green, pink, and sharp-teethed Venus flytrap-backed getup. During her catwalk turn, the designer stopped dramatically for a selfie with the audience in the background. And she wore the best outfit in her line. (I hope she made it, or I’ll feel really bad for saying that!) 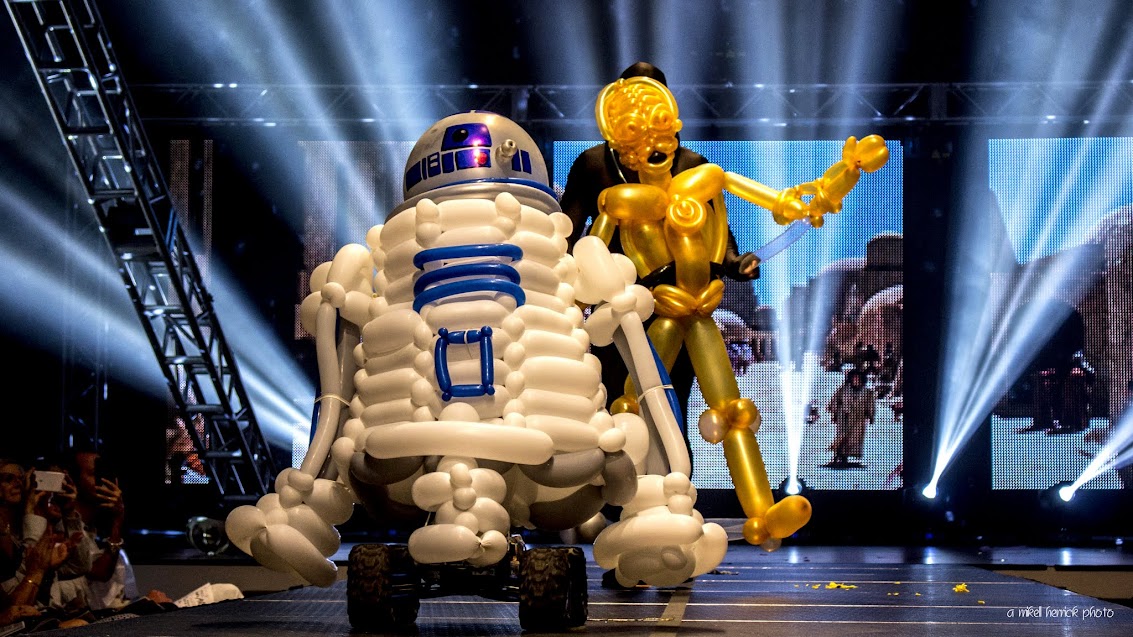 The finale was a collection by Mark Byrne, wearable art made of balloons and air. The first round of Byrne’s work was inspired by Star Trek, the second by Dr. Who, and the third by Star Wars. These are guesses since I’m not overly familiar with any of these franchises. I encourage clarifying comments. In any case, the skill and finesse of making minidresses and ray guns, an angel, a dalek, darth vader, and æis beyond impressive. If I’m labeling the figures incorrectly, please forgive my lack of knowledge and feel free to correct me in the comments or by contacting me for a correction.

After the show, we all went to the after party, which was lit. More music played, and the show replayed on a projector screen for those who had been in it or backstage and not seen the absolutely stunning spectacle of it all. There were drinks and dancing, mixing and mingling, and an all-around fantastic time.

Julie Dressel of Clearwater has been attending for at least five years and said Wearable Art has “a wow factor” that impresses her every time and keeps her coming back each year. I have to agree with Ms. Dressel. The eventædefinitely has a wow factor, I was impressed, and I will return each year just like she and many others will. 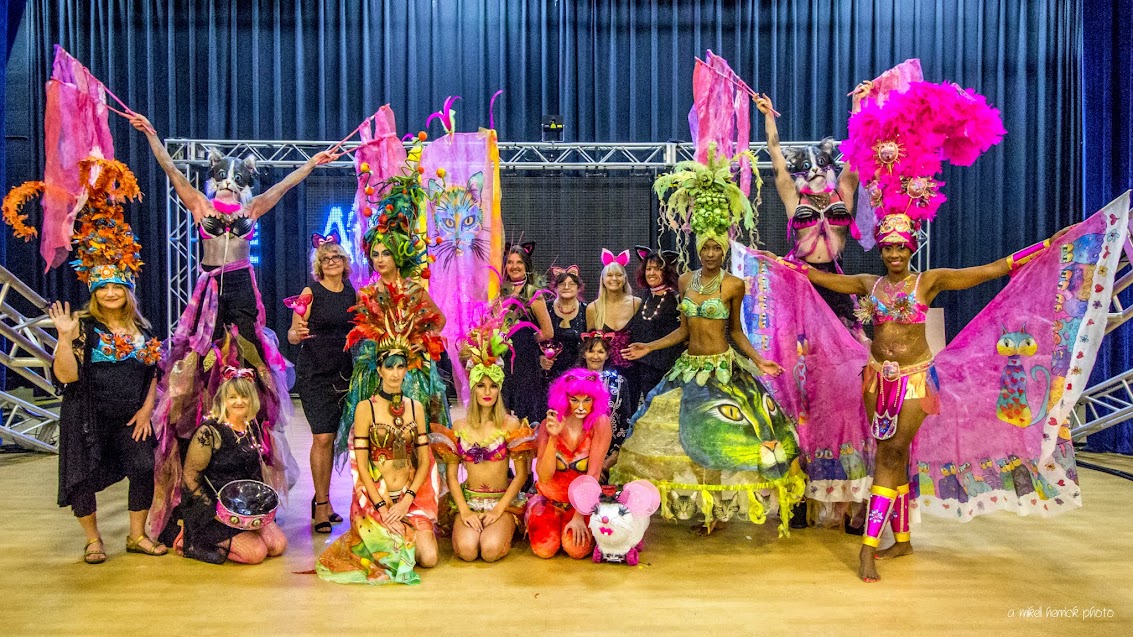